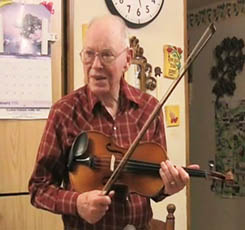 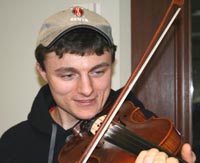 Will Sears is a fiddler and recent graduate of the University of Louisville School of Medicine. Sears also holds degrees from the University of Kentucky in Agriculture and Agricultural Biotechnology and Johns Hopkins University in Molecular Microbiology and Immunology. His interest in homemade music developed from family and community associations growing up during the 1980s and 1990s in rural Whitley County, Kentucky, about halfway between Williamsburg and Corbin. He started playing the fiddle at age twelve. Besides older fiddlers, his musical models and mentors have included singers, banjo players, and other musicians, many now up in years, who are railroad workers, farmers and public school teachers.

Sears' study in the Berea Archives was directed toward gaining an understanding of how his community's traditions of homemade music compare and contrast with those of adjacent counties and other parts of the state generally. Audio sources drew upon early commercial recordings of such groups as Walker's Corbin Ramblers and the later field recordings of Whitley County area musicians and singers made by Leonard Roberts and Loyal Jones. Work in the Archives alternated with interview and performance recording of several Whitley and nearby McCreary County musicians and singers, none of whom have been documented previously.