I have approached my Music Fellowship project from the perspective of what some have termed "Community History," a term that is used to differentiate the work of non specialist, community residents from that of outside academically trained historians or folklorists. I am a performing musician, my main instrument being the fiddle. I began learning early in life from several older fiddlers as I grew up in Whitley County, Kentucky.

In addition to tunes, ballads and songs, I learned much community history from these older teacher-musicians who I came to realize were largely untapped wells of information. They helped me to understand why things are as they are in my community, in terms of the larger picture of work, education, religion, and social life as well as music. My Fellowship project was directed toward achieving a better understanding of my musical heritage and documenting the musical and life histories that were residing only in the memories of my aging mentors. A search of the American Folklife Center's online database of early documentary recordings revealed that there was nothing from Whitley or adjacent McCreary, Knox, or Laurel Counties. The closest that 1930s era folk music collectors such as Alan Lomax and Mary Elizabeth Barnicle came to Whitley County was Clay and Bell Counties respectively. 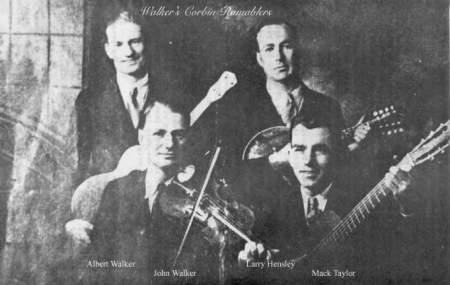 Searching Berea’s sound archives and print material such as the JEMF Quarterly, I found that although early scholarly documentation hadn't occurred, several Whitley County area traditional musicians had sought out commercial recording opportunities, particularly in the 1920s and 1930s. Among these were John V. Walker and his string band, the Corbin Ramblers and Alex Hood and his Railroad Boys. All were able musicians but the possibility of commercial success presented by their recordings was not sufficient to lure them away from family and regular work at home.

Additional review of the Berea audio collections also revealed that later collectors who began work in the late 1950s had barely skimmed the surface in documenting Whitley County traditional musicians. For instance, folklorist, Leonard Roberts teaching at nearby Union College, recorded a few ballads and other songs from four people in the Corbin and Williamsburg area in about 1957. In the Ed Ward Collection there are thirteen home recorded performances of the fiddle - banjo duo John V. Walker and Raymond Perry, dating probably from the 1950s or 1960s. There were also broadcast recordings from evangelist Ernest Martin of his gospel music radio programs from the 1950s and later. And in about 1972, Loyal Jones, of Berea College's Appalachian Center, extensively recorded the playing and story-telling of Whitley County fiddler, Wilse Reynolds.

Links to resources in bold: 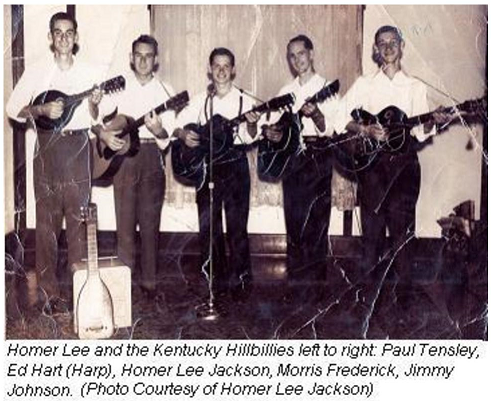 From discussions with local musicians and search of newspaper microfilm, it became clear that during this same twenty year period, local musicians had again turned to commercial technology to communicate their talents to wider audiences. This time it was the first radio station in the Whitley, Knox, Laurel County area, WCTT, which began operation in 1947. Owned by the Corbin Times Tribune, the station's program listings and related newspaper stories make clear that musicians of many persuasions were welcomed to be put on the air. Among several old-time and country groups being heard were future Knox County Judge, Homer Lee Jackson and his Kentucky Hillbillies and the same John Walker and Alex Hood of earlier commercial recordings who had continued working for the L&N railroad in Corbin after their brief commercial recording careers had ended. Particularly impressive among the local talent on the air was the large number of gospel music quartets that appeared regularly. The most popular was the all male, Friendly Four, who appeared several days each week usually in the early evening. Other groups included Willie Littrell's Southern Sacred Singers and the Heidrick Four from nearby Knox County. Also, gospel groups from nearby communities and many miles away gathered monthly on Sunday afternoons at the Corbin YMCA auditorium for community wide singings, portions of which were broadcast on WCTT. 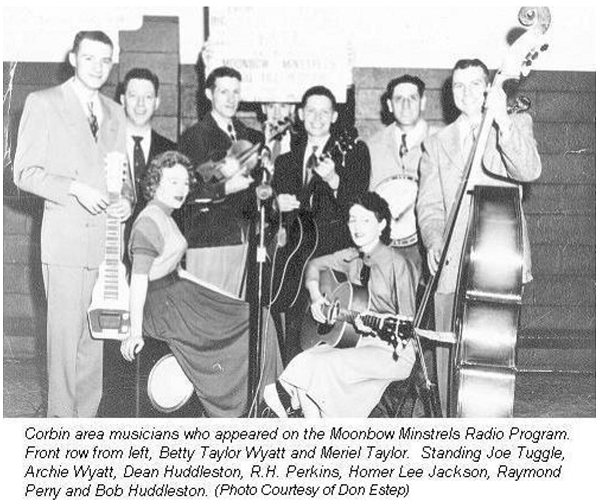 In addition to programs featuring individual musical groups, both sacred and secular, the station aired its own Saturday night barn dance type program called the Minstrels from 1947 to sometime in the mid 1950s. From the beginning, the invitation to local talent for the program was wide ("all bands, gospel singers, popular, and semi-classical music makers") and there was an acknowledgement of varying audience tastes with there being separate 15 minute segments for "ballads," "hillbilly songs," "western music," and "hymns and sacred music."

From 1947 to sometime in 1951 the show was a studio production. Then it moved to the Lynn Theater in the nearby Woodbine community where it became a popular community event as well as radio program, for several years more. The show served as a showcase for many local performers at least two of whom, Claude Harmon and Marion Pridemore, are documented on the much later home video recordings I collected as part of my fellowship work. 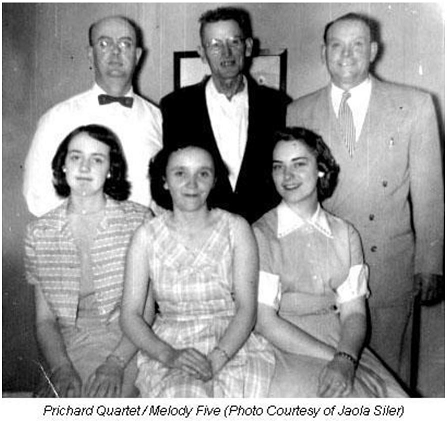 The establishment of radio stations in Williamsburg and Barbourville beginning in the 1950s, provided outlets for yet another generation of able amateur performers. One such group was the Prichard Quartet which was heard weekly in the late 1950s and early 1960s on WBVL in Barbourville. M.T. "Pap" Jones, an L&N Railroad agent in Williamsburg was a musician and promoter who played in several bands during the late 1940s and into the 1950s, 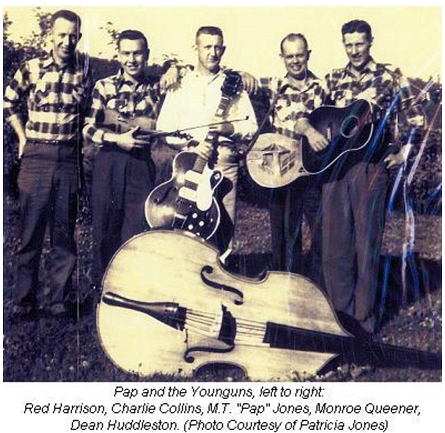 including the Pine Mountain Rhythm Boys heard on WCTT and his own "Pap and his Youngins" on WEZJ in Williamsburg. In the late 1960s and early 1970s, also on WEZJ, Jones produced the Country Music Express program which featured several able amateur musicians of varying ages who represented a wide spectrum of musical interests from old time fiddle and banjo tunes to the current country hits of the day. The program was staged at various times from movie theaters in nearby Jellico, Tennessee, and Pine Knott and Stearns, Kentucky in adjoining McCreary County.

Links to resources in bold: 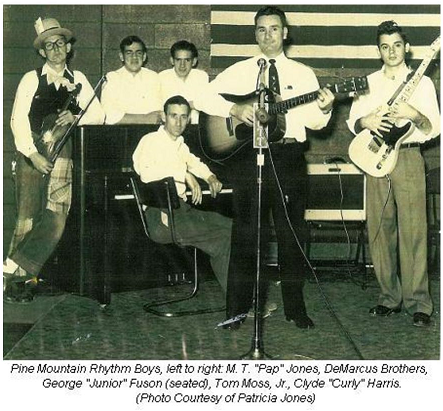 The documentation aspect of my project involved collecting existing home audio and video recordings and making new recordings of older musicians who are still performing, all for inclusion in Berea's Appalachian Sound Archives. I learned that the music I was recording had been the pass-time of country boys from an earlier generation who were working away from home in Harlan County coal mines, the Civilian Conservation Corps in Idaho, or fighting in war-torn exotic places. From another perspective, I came to see that this music has served as familial glue - a common language that can transcend diverging opinions or hurt feelings . The treasured home recordings people have shared   with me provide a way to experience loved ones' music beyond the grave. Collectively, these recordings illustrate how tradition can both stay unchanged and evolve as new ideas and impulses come along. 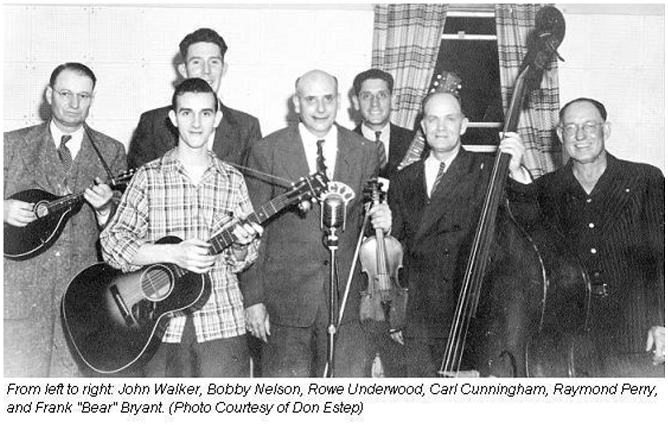 The existing home video and audio recordings I collected from various family members date mostly from the 1950s to the middle 1980s. The musicians they document include most notably, fiddlers Marion Pridemore and Claude Harmon , and guitarist, Xerxes Bowlin. The audio recordings made for radio use document the singing of the Prichard Quartet and Melody Five Gospel groups led by John Miles and Chester Prichard (1950s) and the Country Music Express program produced by M.T. "Pap" Jones (1970s) which featured numerous local musicians. Darlene Carr provided home and radio recordings, photographs, a written memoir and a recorded interview that provide useful descriptions of gospel and string band music activities in the county, especially from the late 1940s to the 1990s