Research by Laura S. McKee, Berea Sound Archives Fellow, regrading how WW-II era radio and personal histories have shaped the development of "From the Diary of Eve", a narrative series of poems set in Southern Appalachia. 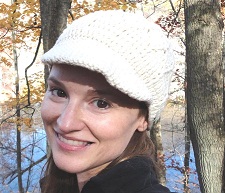 Laura McKee is a writer and teacher in the Atlanta, Georgia area. She received a Wallace Stegner Fellowship in Poetry from Stanford University and her writing has appeared in Gulf Coast, Ninth Letter, Indiana Review, and New South. Her 2012 Sound Archives Fellowship research was in support of a book-length narrative poem presently in process, that is set in East Tennessee during World War II. She drew upon Berea's 1940s era recordings of folklore, religious music, and local radio programming to make possible as she says "bringing the textures of religious language and local media directly into the poem."

How Research Has Shaped The Story

When I began my time at the Berea Sound Archives, I had envisioned using WWII-era radio and various period documents as a way to enrich my understanding of the ways residents would have used and been exposed to different kinds of language in the greater region of Southern Appalachia. As a poet, getting a feel for the different textures of language was key to the project—particularly in shaping the voice of my protagonist, Eve, a young woman whose understanding of the world is being drastically reshaped by both personal and historical events.

What began as a series of poems generally set in Eastern Tennessee, entitled, The Revivalist, and that I had intended to develop into a book-length narrative poem exploring the protagonist’s journey from rural Appalachia to the Belgian front of  WW II as a field nurse, has evolved significantly during the course of my research at the archives.  The book was to have a three-chapter structure, and though I have revised the narrative, this general structure still holds.  The new working title is From the Diary of Eve.

Originally, I had envisioned my research would inform the language of Chapter 1, a section that would sketch the portrait of minister’s daughter who is learning the art of folk medicine from her mother (who descended from a long line of what were regionally known as “granny women”) Roughly sixteen at the beginning of the story, Eve grows increasing disillusioned and restless with her immediate world. This restlessness is born, in part, from her fascination with a wide-range of radio programming as well as her growing interest in modern medicine. Above all, the encroaching modernity to which she feels herself drawn deepens her own religious skepticism and sharpens her internal resistance to a community strictly shaped by  a Biblical, evangelical paradigm.

Ultimately, these conflicts still drive the narrative arc of Chapter One as well as the poem as a whole. However, building from the diverse manuscripts and radio broadcasts I studied during my time at Berea, I have decided to set the entire book in Appalachia, ending instead with her decision to leave the region to join the Army Corps of Nurses.  Instead of the three chapters tracing her journey from home to a foreign country, the story will focus on her journey within the region, exploring both the commonalities between various communities as well as the distinct and subtle differences of landscape, class, language, economy, education, and relationship to the forces of modernity.

Given the range of my source material, the most explicit way my research has inspired the book is in shaping character.  I have used the Archives’ collection of radio broadcasts, photographs, oral histories, and personal journals to bring my characters into clearer focus—animating them past mere metaphorical figures or poetic devices. I will elaborate on how particular sources inspired specific characters in my summary of research below.