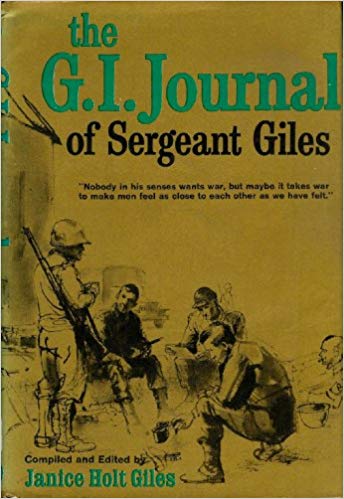 The G.I. Journal of Sgt. Giles

A compilation of World War II journal entries and letters home, this book outlines the wartime experiences of Sergeant Henry Giles during his tour in Europe. As noted by his wife and editor of the book, Janice Holt Giles, the various entries are not differentiated as either letters or journal excerpts, but rather organized as a “journal” to give a seamless and compelling account of a soldier’s firsthand experiences and reflections on life in combat.

Though I haven’t finished reading the journal in its entirety, I was immediately struck by Giles’ prowess as a storyteller, his humor and vulnerability, as well as his ability to evoke character by capturing ordinary human moments within the events 13 of war. Giles’ voice is strong, authentic, and intimate and will serve as an inspiration for Patrick’s wartime letters to Eve in Chapter Three. Some of the episodes in Patrick’s letters will echo events recounted by Giles, and a few select quotations and scenes (indicated with an asterisk) will be woven into poems like the ones that appear in “Departure, 1942.”

dropped at the idea of hell. They seemed to quarrel for shadow,
the sun’s arrows breaking through the trees. Hell
was closer than we thought. The crack in my father’s voice

as another was taken from him: Thy will…on Earth
When my brother left, I returned. As best I could.
My mind pointed elsewhere. Over the hill-dark trees.

My brother, Patrick, wearing a charm of St. Christopher*,
a gift from a businessman in Louisville with eyes
long yellowed from memories of war, shipped out months before,

his bag slung across his back and his knees locked straight
so our father wouldn’t see them shake. There was nothing
to deliberate. The wind tucked my hair into my teeth

as I called goodbye, and I broke a dozen strands
when I jerked the lock free. Down the tapering tracks,
the train lugged the weight of a hundred boys not yet gripped

by what Patrick would call “the invasion shakes”* in a letter
arriving from his outpost in England. The shape of letters
lighter, leaner as if he’d practiced some other hand that would

hold the world between the lines. I knew him better.
How he’d bite his lip like a girl over his cowboy swagger
carefully echoed from Wayne’s chapped stride in Stagecoach,

the blister of a horse burned along his California hide.
Even the familiar hymns could not erase the image
of that film’s light against his forehead: its pulse like a colt’s heart

under the weight of its first man as we sat in the theatre
knowing somewhere our lives would soon begin.
And that even prayer was an act of war.