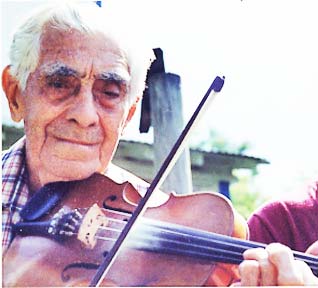 Melvin Wine (1909 - 2003) was born in Burnside, West Virginia. His father, Bob Wine, was a fiddler and his mother, Elizabeth, sang ballads and hymns. He learned to fiddle through what he called the “Appalachian Suzuki method,” which meant that even though he was forbidden to touch his father’s fiddle, he would sneak it out while his father was away. He taught himself to play “Bonaparte’s Retreat” and eventually performed it for his father who then taught Melvin to play tunes he had learned from Melvin’s grandfather, Nelson, and great grandfather “Smithy”. From that time, Melvin’s style was developed under the close supervision of his father. Other area fiddlers Wine credits as sources for many of his tunes include Sam Hacker, Jack Blake, John Cogar, Milt Perkins, Jilly Grace, Tom Dillon, and “Uncle Jack” McElwain.

Sourwood Mountain (PDF) - Wine’s performance of Sourwood Mountain is in the key of E flat. Structurally, the tune is in the two-section, or binary, form common to many dance tunes, such as reels and breakdowns. Wine begins his performance in an unusual manner by playing the high strain first. His last statement of the tune ends after the first strain, giving the impression that he has reversed the order of the two. This variation is what makes his performance different from Carpenter’s.

Jimmie Johnson (PDF) - is a three-strain tune with each strain largely repeating similar melodic material at different pitch levels. Wine’s performance is in the key of A flat, but begins with the first strain on E flat and drops down to A flat for the second strain. His third strain is the same as the first, only an octave lower, and the last strain is the high strain, starting on A? a fourth above the E flat of the opening strain. Structurally, his performance can be diagramed ABA'C.

Wine’s performance sounds more varied than Carpenter’s because of the order in which the strains are performed. In the larger scale of the entire performance, Wine’s alternation of the B and C strains between statements of the A strain give it more of a rondo sound and make the tune sound more continuous by blurring the line between each repetition. Carpenter’s performance seems to treat the C strain as an irregular addition to a binary tune, which serves to punctuate each repetition of the tune.

Hey Aunt Katie There's a Bug On Me (PDF) - is a polka, and as such, has two different key areas. The opening strain is in the key of A flat and the second strain is in D flat. This tune is a good demonstration of Wine’s precision bow work as he tends to re-articulate or arpeggiate what likely were sustained notes in the original tune. Examples of this include the repeated notes in the first strain, which sound like they could be quarter notes but are re-articulated into eighth notes, and the ascending eighth note patterns in the middle of the second strain, which roughly corresponds to the four repeated quarter notes in the first strain. ( / )

Chicken Reel - was published as a novelty tune around 1910. It is unclear whether or not the tune was actually a folk melody before it was published or whether the composer compiled it from separate folk strains. It follows the binary form common to breakdowns and reels. Wine's performance is in A flat and as with the performance of "Sourwood Mountain," he reverses the order of the high and low strains.