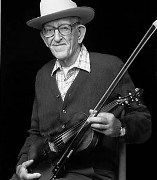 Fiddler Ernie Carpenter (1909-1997) was born in Braxton County, West Virginia and was a fifth-generation fiddler. His great-great grandfather, Jeremiah, was one of the first white settlers of the Elk River area. During a conflict with nearby Native American tribes, Jeremiah took his family into hiding into the rock caves and overhanging shelf rocks along Camp Run, a tributary of Laurel Creek, which is a tributary of the Elk River. Ernie’s great grandfather, Solomon “Old Solly” Carpenter, was born while the family was in hiding, and family tradition claims that Jeremiah created the tune “Shelvin’ Rock” to commemorate this event. Grandfather William “Squirrely Bill” Carpenter was Ernie’s connection to these earlier generations and was the source of most of Ernie’s tunes and stories. Besides his family, Carpenter was also influenced by other fiddlers in Braxton County and neighboring Webster County, such as “Uncle Jack” McElwain, Wallace Pritchard, and George Hammons.

Sourwood Mountain (PDF) - This performance is in the key of E flat. Structurally, the tune is in the two-section, or binary, form common to many dance tunes, such as reels and breakdowns. Of particular note in this performance is Carpenter’s tendency to extend phrases and sections. The first time through the tune, Carpenter extends the end of the first phrase of the second strain slightly (only really noticeable because it throws Milnes off briefly). The second time through the tune, he plays the first strain three times rather than two. Carpenter ends his performance by playing only the first strain.

Jimmie Johnson (PDF) - is a three-strain tune, with each strain repeating similar melodic material at different pitch levels. Carpenter performs the tune in the key of A flat , but begins the first strain on E flat. The second, or high strain, focuses on the A flat a fourth higher than where the first strain began. The third strain drops two octaves to the A flat below middle C and the fourth strain is a repeat of the second strain played an octave lower than the original. Structurally, his performance can be diagramed as ABCB'.

Shelvin' Rock (PDF) - Carpenter says that this tune originated with his great-great grandfather. However, Shelvin’ Rock is a floating tune title and is used for at least one other tune in Braxton County. This version of Shelvin’ Rock is played in the key of D flat and consists of three strains in an AABC pattern. The strains are asymmetrical, with lengths of 8, 12, and 10 bars respectively. Carpenter’s performance takes some liberties with the third strain. The first, sixth, and eighth statements of the tune repeat the third strain, creating an AABCC pattern, while the final statement of the tune omits that strain and ends after the second strain.

Cripple Creek (PDF) - is another binary form tune with a low strain and a high strain. Carpenter plays the tune in the key of A flat and omits the second strain for the last statement of the tune.