On the Beauty of Collections 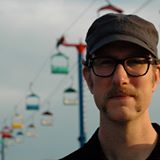 Brian Harnetty is a composer from Columbus, Ohio. Harnetty received his Master of Music in Composition degree from the Royal Academy of Music in London in 2000, and PhD in Sound Studies from Ohio University in 2014.  He has served as visiting professor of music at Kenyon College in Ohio and on the MFA-Interdisciplinary Arts faculty at Goddard College in Vermont.

Brian Harnetty’s creative and scholarly work connects sonic archives, performance, ecology, and place. Many of his pieces transform archival material––including field recordings, transcriptions, and historic recordings––into newly re-contextualized sound collages. While at Berea College as an Appalachian Sound Archvies Fellow in the spring of 2006, Harnetty focused on identifying and analyzing traditional music for incorporation in a large-scale multiple media work entitled american winter. His next offering inspired by material found in the Berea College Sound Archives was the 2009 collaboration with Bonnie "Prince" Billy entitled Silent City.

Harnetty's current release is The Star-Faced One (2013), an album-length version of a 2010 sound installation based on the Sun Ra/El Saturn audio archive. Andrew Male from the London, England-based Mojo Magazine gave the CD 4-stars and it was named the magazine's Underground Album of the Year.

Brian's latest works return to the Berea College Sound Archives with the upcoming Dust-to-Digital release of Rawhead & Bloodybones, featuring recordings of folk tales from the Leonard Ward Roberts Collection, and a curated set of source recordings from previously unpublished sources in the archives.