A profile and archival audio of Bill Williams of Greenup, Kentucky. Bill was a retired railroad worker who performed for all walks of the local society for nearly 50 years. by John H. Bondurant 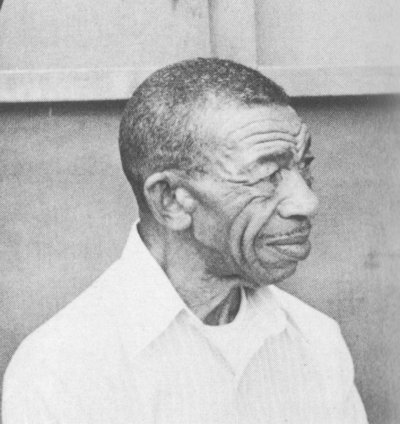 For most folks, Bill Williams is an unknown figure, or at best an obscure performer of old country blues, rags, and ballads who was discovered late in life. The commercial work of Williams is scarce, two LPs (one of them posthumous) on a small blues reissue label in the early 1970s. But this belies the over 50 year career of Bill Williams in the community of Greenup in northeastern Kentucky. Bill Williams was an extraordinary musician who was known to every walk of society in his community. Bill, or Billy, was also one of the last of the earlier generation of the songster tradition in American vernacular music.

Born on February 28, 1897 in Richmond, Virginia, Bill Williams spent his childhood in the countryside some sixty miles outside the city. His first musical influence was his brother James, from whom Bill learned to play ragtime guitar. By age 14 Billy was working as a waterboy on the railroad in Delaware. After a stint in the mines out west in Colorado, Bill returned east and briefly worked in Bristol, Tennessee. Now in his early twenties, Bill hopped a freight train to Kentucky where he landed a job on the C&O Railroad in Russell on the Ohio River in Greenup County. While Bill continued to travel throughout the region to work, Greenup, Kentucky, became his home for the remainder of his life, over 50 years.

Initially performing music was very much an avocation for Williams, a pastime after the workday or during break times on the job. However, even before Bill’s retirement in 1958, he became a fixture on the Greenup social scene, playing for just about every function and event imaginable from country dances to garden parties. This is clearly evidenced in his versatile repertoire, which ranges from the ragtime and barrelhouse blues of his youth, to old-time fiddle tunes, country, and pop songs of the early-to-mid 20th century.

This career predates the ‘discovery’ of Bill Williams in the early 1970s by nearly four decades. Greenup County musician Orin Nelson introduces Williams in a 1961 recording as “an old friend of mine I’ve known for many years.” Williams was also a regular performer at the Mountain Heritage Folk Festival and other local events. After performing locally for decades, Bill Williams finally received due recognition outside Kentucky at the 1970 University of Chicago Folklore Society Festival and the 1971 Festival of American Folklife. Bill Williams died in Greenup, Kentucky, on October 6, 1973.