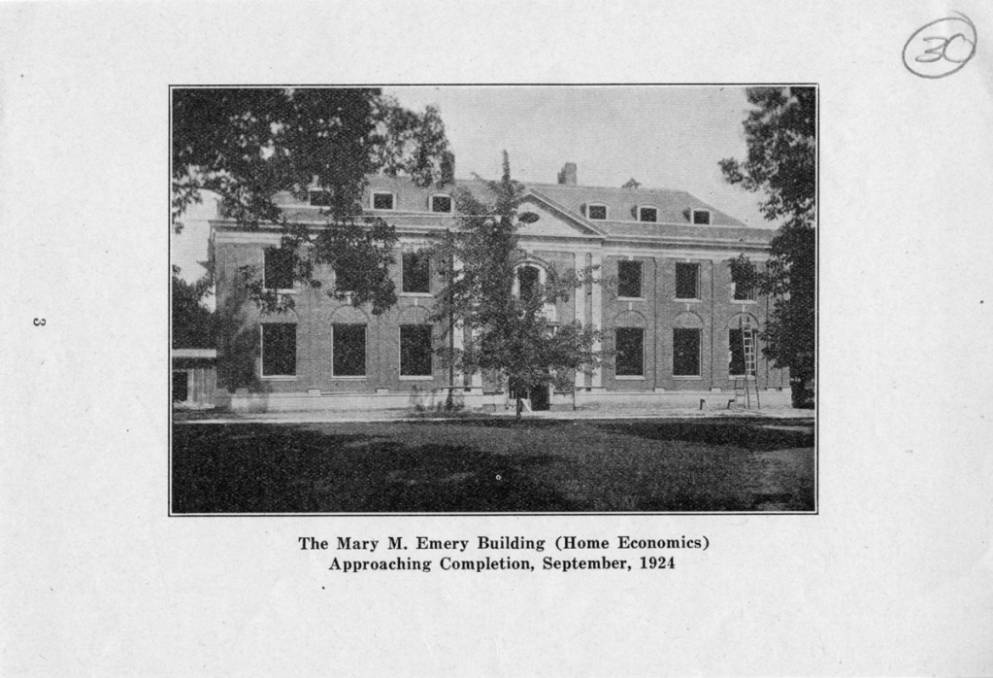 Following the First World War Armistice and during December, 1918, after a year's discussion and correspondence with President and Mrs. Frost, Mrs. Thomas J. (Mary M.) Emery of Cincinnati gave a gift of $50,000 which was to be used as "seed money" to acquire additional funds to construct a women's classroom building. Gray and Lawrence had earlier worked with College Trustees and administrators to develop a plan for the placement of various campus buildings. During the spring of 1923, the Board and architects determined the "Women's Industrial Building" would be built on "University Row". This date followed the Armistice, the end of the war and a period of economic depression, when College funds were very tight. Emery Building would visually balance the Carnegie Library and the facade was to be of the same height and proportion as to "form an approximate balance to the library building" (Gray letter to WI Hutchins, January 8,1921). Both buildings were placed at an equal distance from the ends of Lincoln Hall. Emery Building began as an idea during the Frost Administration, but was not built until the early years of the Hutchins' Administration. Rustic Cottage had to be moved north, behind and parallel to this "Row" and out of line with the newly proposed symmetry. Gray's blueprints indicated the new location for Rustic Cottage. Emery's placement on" University Row" was
chosen to reinforce the importance of the Home Sciences and "the ministry of the home" in Berea's curriculum of education (Berea Citizen, October 16,1924, 1; October 23, 1924, 1; BCABG, 5.39, box 2). Elizabeth Billings of New York City (Frost diary, Dec, 1918) also gave generously for the construction of this building. With the Billings gift, additional smaller gifts and the interest
compounded on the principal of Mrs. Emery's first gift, construction finally began during April, 1924.

Students constructed the first Home Economics Building, the "Teacherage", Merrow Cottage, across the street from Phelps Stokes Chapel in 1895 and President Frost had various houses moved to different campuses to serve as "Country Homes". The first plans for Emery (1922) were too large and too expensive. To cut the costs it was decided to pare down the size by removing a large auditorium, realigning the placement, rethinking room use and using masonry walls instead of poured reinforced concrete walls.
Economical and constructible plans for Emery Building were presented to the Board of Trustees a year later, in June 1923, and site preparation began that fall.

At the same time Emery Building was being built, important Dutch architect, Gerrit Rietveld, was constructing the Schroder House, Utrecht, Holland, an innovative and very unique private home in the ultra modern De Stijl-Neo Plastic style. Mrs. Schroder worked with the architect to improve the domestic science of daily life. New home management lessons related to modern housing
construction were being taught and practiced in Europe. Berea's educational theories were ahead of the times, but her choice of architectural styles was firmly planted in the past; Europe's were not. This symmetrical, common bond red brick, Colonial
Georgian inspired building was dedicated on October 18, 1924. The building was built to be used by Junior High SchooI, Lower and Upper Division women. Placed between two architectural units consisting of three bays, the main entrance is a graceful adaptation of Baroque English stone and brick work and is similar to the northwest entrance on Kentucky Hall. This entranceway is composed
of pilasters, an entablature, pediment and cornice, all constructed of finely tooled limestone. The first floor wooden sash windows are placed in blind Roman arches; brick Doric pilasters rise from a limestone base and are paired at the corners. A limestone entablature and brick parapet were inserted to support a modified Mansard roof with dormer windows. Stairs rise on both sides of the
entrance door and on this ground floor three clothing laboratories, an office and a classroom where Home Economy would be taught were planned. Four kitchens that were variously furnished, a dining room seating eighteen, and a library were on the second floor. The third floor housed Home Management classes and faculty offices, and on the east end were bare rooms
where class problems could be tackled. Eunice M. True, who assisted and was consulted on the design of the building, was the first Director of the Home Economics Department whose name changed in 1991, to the Department of Child and Family Studies. This new name better suited and expressed the contemporary needs and courses offered by the department and faculty. The food
labs were renovated in 1975.

When the Emery Building was dedicated in 1924, Berea had six Country Homes and a rural laboratory, "all {made possible by the} insight and sacrifice of Eleanor Frost". Home Sciences were taught in these various homes. Miss Mary Sweeney, noted Home Economist, gave the principal address at the dedication (Berea Citizen, October 16, 1924, 1; October 23, 1924, 1). At the time of publication, the College has Emery Building on a short list for proposed renovation. No major work has been done on the building since it was constructed in 1924. 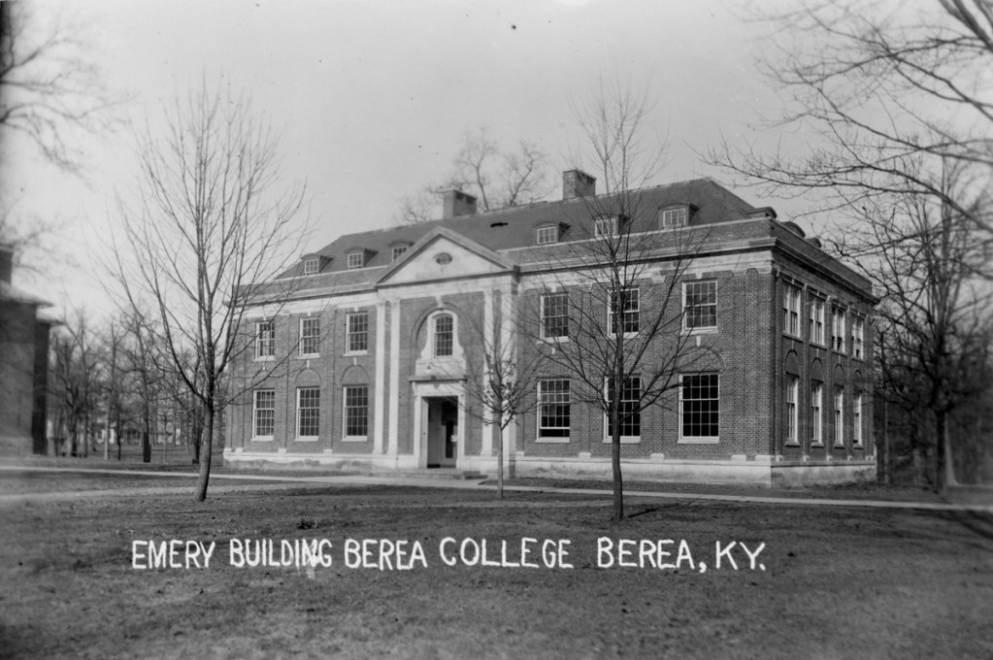