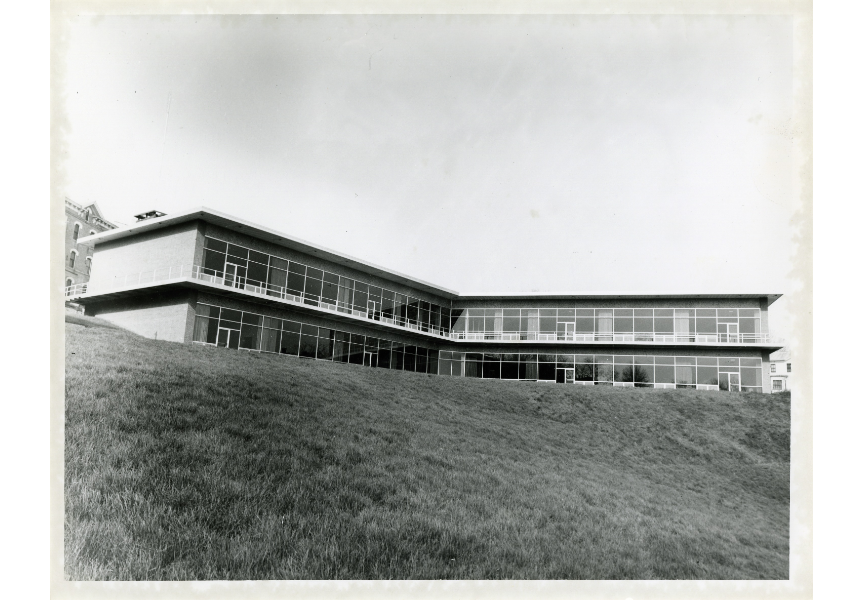 The concept for this building was initiated in 1945 by College Alumni and President Francis S. Hutchins to commemorate Berea College’s first one hundred years. Contemporaneous with this concept was also the idea that the building would serve as a World War II memorial (BCABG, box 2). Wilson Evans was Alumni Secretary when the structure became a working idea, 1940-48 (Berea Citizen, April 13, 1961, 1). Finances for the 52,000 square feet building were to be shared by both alumni and other benefactors. The Kresge Foundation of Detroit offered $50,000 on a College matching basis. The James Foundation of NY City, Louis D. Beaumont Foundation of Cleveland, The Courier-Journal and Louisville Times Foundation, the Chrysler and Koppin Company of Detroit, and Kroger Company of Louisville all donated funds for the construction of the building. Construction funds continued to increase during the 1950s; ultimately 6,000 Alumni contributed about $375,000 (Berea Citizen, December 4, 1958, 1). Plans and specifications were approved (April 11, 1958) and Trustees voted to start construction in November. During Summer Reunion, July 25, 1959, the site was dedicated and ground was broken later in September, 1959. However, construction bids were rejected in April, 1960, and building did not begin until the summer of 1960, making it impossible to lay the corner stone until November 26, 1960 (Berea Citizen, September 17, 1959). Placed in the cornerstone were the following: the Alumni Association Constitution, a list of the contributors, a copy of “Berea Beloved”, baccalaureate addresses by William J. Hutchins, the Alumni Magazine, the November 22 Pinnacle, Berea’s First Century, and a copy of Bereaway (Berea Citizen, November 24, 1960, The steel and concrete building had exterior curtain walls of red bricks laid in running bond. The flat roof used wide overhanging soffits and the main floor continued beyond the glass curtain walls to form cantilevered porches on the south and west sides. Perpendicular diaphragm walls were incorporated along the north and east walls to break up the wide surface planes and to assist in supporting the plastic flow of long broad walls.

The Alumni Building opened on February 11, 1961, and was dedicated to “the improved quality of students’ lives.” Earl Robbins, Russell Todd and W. D. Weatherford (College Trustees) spoke at the dedication ceremonies. Weatherford said: “we have been feeding our students for ninety years in basements, its time we moved them out” into the sunshine (Berea Citizen, April 20, 1961, 4). The main floor housed the Alumni Offices, Office of Coordinator of Social Activities, the Snack Bar and Recreation Room and the main lobby. The ground level was devoted to food service personnel, storage, mechanical and dining rooms (Welsh, Drukker, Mitchell). Separate and individual rooms were given and dedicated to honor Berea College friends: the Anna Murch Hutchins dining room (wife of William J. Hutchins) given by the Charles Seaburys; the Mary Cocks Welsh dining room (1917, Superintendent of Boarding Halls-1920-1955); the Dr. William E. and Esther T. Barton Memorial Room which was used by the YMCA, YWCA and other religious groups (Barton was a College Trustee, 1895- 1930, Oberlin Theological graduate, clergyman and author-biographer of Abraham Lincoln, and donor of West Pinnacle— “Barton Pinnacle”—to the College); the H. E. Taylor conference room (College Business Manager, 1906-1934, and organist); the William Jesse Baird student lounge (1915 graduate, Director of Agriculture and Director of the Farm in the Vocational School– 1924-32, Dean of Foundation School–1925-44, Director of Teacher Training–1939-44, President of Martha Berry Schools and President of Morehead State College–1946-1951); the Raymond B. Drukker dining room (faculty member and Executive Assistant to the President from 1944 until his death 1960); and the Richard Noah Mitchell dining room (Berea Alumnus, February 1958, 3-5; Berea Alumnus, January 1962, 9). At the opening of the upper floor and Snack Bar on February 11, 1961, President Hutchins and Dean Louis Smith sang a duet “Good Berea” (Berea Citizen, February 16, 1961, 1; BTM, April 14, 1961). Food Services and the dining halls opened for student use on March 30, 1961, making the whole building fully operational (Berea Alumnus, April 1961, 3-4). 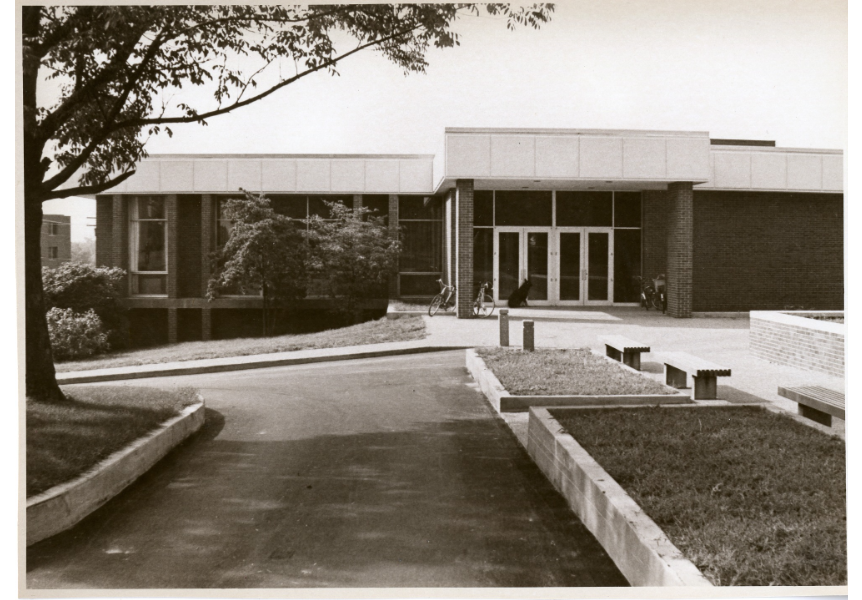 During July, 1972, students designed and constructed a new arrangement for the Snack Bar and an extension to the whole building was constructed and dedicated on Labor Day, May 2, 1978. Construction began on this 16,800 square feet extension on March 18, 1976. This two-story “underground” southern extension contained a recreation room, a small auditorium and dance floor which was the new home of the Country Dancers, a conference room, a kitchen and ample storage space for clubs and various campus groups (Berea Citizen, March 25, 1975, 1; Berea Alumnus, January-February 1978, 7-11). The original building was expanded, ceilings and partitions were changed, additional office space and conference rooms were created, the Alumni Office had a new expanded space, the front drive was replaced, plantings were sited, and the roof of the extension became a planted terrace which could be used for outdoor meals, amphitheater and recreation.

Food service and its kitchens and the adjacent dining halls were completely renovated in 1998. At the end of the spring semester, 1999, much of the main floor of the Alumni Building was gutted and the snack bar, reception desks, and lounges were removed. A new exit to link the building with the Woods-Penniman/ Crossroads Complex was cut through the west wall; the snack bar area was cut up into offices and lecture reception rooms; the whole building was fitted with fiber optic cables and computer hook-ups; new carpet was laid; new furniture was purchased; new hung ceilings were installed; and floors were polished and walls were painted. All renovations were completed during the summer months and the building was returned to the students in time for the beginning of the fall semester.