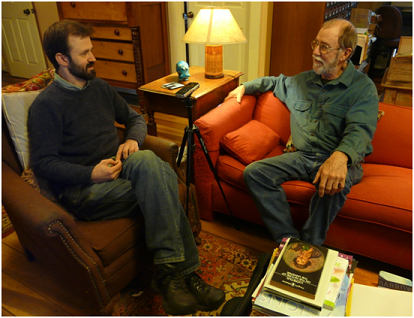 John Harrod was born in 1946 in Shelby County, Kentucky, and with the exception of two years in England, he has lived in Kentucky his whole life.  Over time, he became one of the leading documenters of older style traditional music in Kentucky, particularly its strong fiddle tradition.

Working at various times with Guthrie T. “Gus” Meade and then later Mark Wilson, Harrod helped research and record hundreds of musicians which ultimately culminated in these releases (mentioned in the interview):

All of these were released as part of Rounder Record's North American Tradition series, which is no longer active.  A later set of releases drawing on some of the same field recordings came out via the  Musical Traditions label in England:

These were produced by Mark Wilson and included a broader survey of material including songs and banjo tunes.

In addition, Wilson and Meade had previously produced several other relevant releases of Kentucky musicians in the 1970s which had an influence on Harrod.  These musicians included J.P. and Annadeene Fraley, Ed Haley (arguably a West Virginia fiddler as well), Asa Martin and the Cumberland Rangers, and Buddy Thomas.

These official releases, while extensive and providing important documentation and analysis of Kentucky's traditional music, merely scratch the surface of the total amount of material collected individually and collectively by John Harrod, Gus Meade, and Mark Wilson in Kentucky.  In the 1990s, Harrod donated his collection to the Sound Archive at Berea College; later, he gave copies of it to Morehead State University.  In 2012, I received a Sound Archives Fellowship from Berea College to carry out this oral history interview with him.

The idea behind the project was to capture John Harrod's observations about teaching, documenting and disseminating traditional music in Kentucky since the 1970s.  These interviews can be read independently or as a supplement to the extensive liner notes accompanying the body of work referenced above.  Topics discussed include Harrod's family background, his approach to field recording, rural life in mid-20th century Kentucky, the influence of geography on musical traditions, as well as anecdotes concerning specific musicians and “hotbeds” of traditional music.  In addition to the main body of the interview, there are three collecting stories included as a supplement.

Because geography plays such a major part in Harrod's thinking about traditional music, I created a Google Map in order to pinpoint the locations of the musicians he recorded:

The map features the names of musicians, location by town (when available) and county, and the recording dates.  I recommend turning on the terrain layer to get a feel for the topography of where each musician resided as well as their place in the greater community of musicians, both locally and throughout Kentucky.

The interviews were conducted at John Harrod and Tona Johnston Barkley's home in Owenton, Kentucky over several visits in March and April 2012.  When not in Owenton, I was in Berea poring over the sound recordings of both interviews and music in the John Harrod Collection.  This rich collection, with which I already had some familiarity, provided the basis for the following conversation.

To Jamie Marie Bradley, John Bondurant, Harry Rice and Shannon Wilson with the Berea Special Collections and Archives for giving me the opportunity to carry out this project as well as assistance in accessing the materials and useful feedback at every step along the way.

Michael Ismerio, another Sound Archives Fellow, for accompanying me on separate trips to Owenton and for conversation, encouragement and ideas that fed into the project.

To Kent Gilbert in Berea for his hospitality.

Thanks also to Sound Archives Fellow Josh Bearman and to Anna Harrod for the music and “Fellowship.”

Lastly, to John Harrod and Tona Barkley for their warm hospitality and cooperation with this project.  John also was a great help with his editing skills.  I'd like to thank him for doing so much to document and contribute to our understanding of Kentucky music.