Kelly Gilbert and his Wife

SP:  What was it you said about Kelly Gilbert's wife?

JH:  She didn't like fiddling and she'd give him a pretty hard time about it and she wasn't kidding, either.  She said she hated it and so it was always a little uncomfortable when we'd go to his house to record.  He seemed to be a little bit beat down by it.  If we'd ever take him somewhere, he loved to get away so he could fiddle.

We took him over to play at a little festival in Shelbyville one time and Earl Thomas, Jr. went with me and he wore us out, man!

He was 84 years old then and Earl and I had to take turns playing guitar for him all afternoon.  One time down at Frankfort at a gathering at the Old Capital, it was a hot day and he had dressed up and was wearing a white shirt and a coat.  Man, he played in the hot sun all afternoon.  When he wasn't on the stage playing, he was back under the trees just playing and playing.  That night, we went over to Marshall Thompson's house and we kept on playing and he wouldn't let us take him home!

It got to be about two AM and we were tired, we had to take him home – he didn't want to go.  He loved to play.  He didn't talk very much; he didn't like to talk.  You could get information out of him but he really just wanted to play. 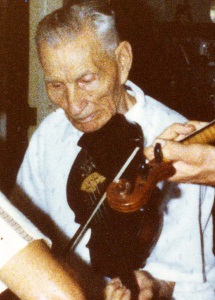 SP:  I noticed that some of those sessions you did had gazillions of tunes on them.

SP:  Some of those guys were like that; Hawkins was kind of like that.  Just on one day there's so many more tunes for some of these guys than other guys.

SP:  It wasn't just that they knew the music; they just liked to play.

JH:  Yeah, they liked to play.

SP:  Do you know if he was playing with anyone else at the time, much?

JH:  Well, he used to play with a bunch of old guys in Frankfort which included Pop Baker, the other fiddler.  And he used to play with a guy named Ollie Sharfe that I've got some home recordings of, who was a real good fiddler.  But at the time I knew him he wasn't playing with anybody.  Those people were all dead and gone, so he was another one of those fiddlers, who was at that point, musically stranded.

SP:  One of those guys who was the last of his line?

JH:  Yeah.  Now he and Boss Sewell played together a little bit.  They were the remnants of this band called the 65er's – that was an old-time stringband.  Two fiddlers: Kelly and Pop and Boss Sewell played the banjo.  I have a great picture of them.  Claude Hellard played guitar and Bill Tom Cummins played the mandolin. They played in Bill Tom Cummins’ barbershop down in Frankfort on Broadway.  When I first met them, they were still getting together.  Pop Baker took up money for this parking lot over on Wilkinson Street.  On Saturday morning you could go down there and they'd all be jamming -that was in the early '70s.  So this was local old-time stringband jamming on Saturday morning and then other times playing in Bill Tom Cummins’ barbershop in downtown Frankfort, so there was a little scene there.

There was a bunch of other guys that they talked about who were already gone like Howard Phillips and Ollie Sharfe; I ended up getting home recordings of both of them.

Pop Baker in the Hospital

SP:  She [Tona Barkley, John's wife] says you should tell me the story about Kelly Gilbert being in the hospital.

JH:  That was Pop Baker.  Apparently Pop Baker also had a wife who didn't like the fiddle, either.

JH:  He'd had a heart attack and he was in the hospital.  I never really played with him, I'd just go down to that parking lot and hear them on Saturday morning.  Marshall Thompson was with me; he used to go down there with me sometimes.

Marshall Thompson and Kirk Somerville and I decided we'd take our instruments and go to the hospital and play for Pop one more time before he died.  So he's in the hospital in Frankfort.  We go in there and he's lying in the bed, asleep.  We took out our instruments and we started playing kind of softly and he woke up and, man, was he glad to see us.  He perked up and about that time here comes his wife and she's bringing the big nurse and, oh man, she came in and they ripped us.  They said, “You all get out of here, quit disturbing him!  This old man's dying!”  He got all riled up; he said, “Goddamn, I'm gonna get out of this hospital if it kills me!”

So anyway, we perked him up and then they kicked us out.   Well, about two weeks later - he didn't die, he survived – he got out of the hospital and ran off with another woman!

JH:  Lived a couple more good years after that.

SP:  So what's the moral of the story?

JH:  We saved his life and gave him some more time to fiddle!  Just with our music.

SP:  What about that story about taking Bill Livers to see his old running buddy in Indiana? 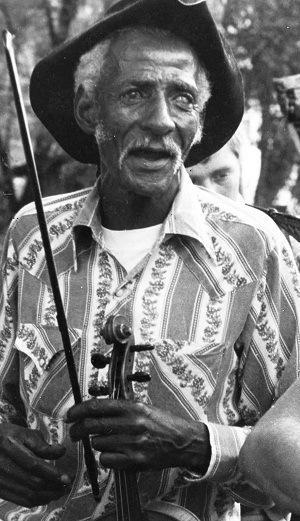 JH:  Well, Bill – you know, we were four young white guys playing with Bill, and I knew some white people he'd played with around Owen County and actually, a band of sorts over around Holbrook in Grant County that he played with.  They called themselves The Holbrook Idiots.  But these were all white people.  I also knew that his family played music and he came from New Liberty which was a black community out in northwest Owen County.  So I knew there must have been some black music; he used to play with black people, too.  I was always curious: were there any other black people around that he used to play with?

One day he called me up and said that he had found the whereabouts of “Buck” Payne.  Charlie William Payne, they called him “Buck.”  He was this black guy Bill used to play with in the beer joints over at Madison, Indiana.  He'd found out that Buck had remarried and he got his address over there in Madison.  So we went over there and I took my tape recorder.  And those two old birds probably hadn't seen each other in thirty years and they got so excited about seeing each other.  Charlie William played blues piano and blues guitar; just about all blues music.  So they started out in the bedroom sitting on the bed playing the fiddle and the guitar.  They were having a time.

Then they moved into the front room where the piano was and he got on the piano and Bill was playing the fiddle and then you hear on the tape, you hear the door open, and this large formidable woman with a real deep voice: “Charlie William, you know I don't allow that in here!  No more of that!”

The music just stopped and poor old Charlie William – I didn't know this, but he was one of those people who, when he gets nervous, he develops a stammer.  Poor old thing [imitates stammer] like that.  She looked at Bill Livers real mean like she knew who he was and disapproved of him; she'd heard stories about him.

SP:  You never connected with him again?

JH:  No.  That would have been … if there had been some way to get Charlie William out and start going again, you know … they played all blues, some of that raggy stuff.  No breakdowns or anything like that.

SP:  On that session – it's just a handful of songs – did Bill play anything he wasn't playing with you guys?

JH:  Well, the one I remember was that Running Around Blues that they said they made up.  It's not real distinctive or anything but that was their song.  It was kind of a typical fiddle blues that you could play on the guitar or the fiddle, either one.