From the series "Musical Migrants: From North to South" from Falling Tree Productions for BBC Radio 4 produced by Rachael Hopkin. 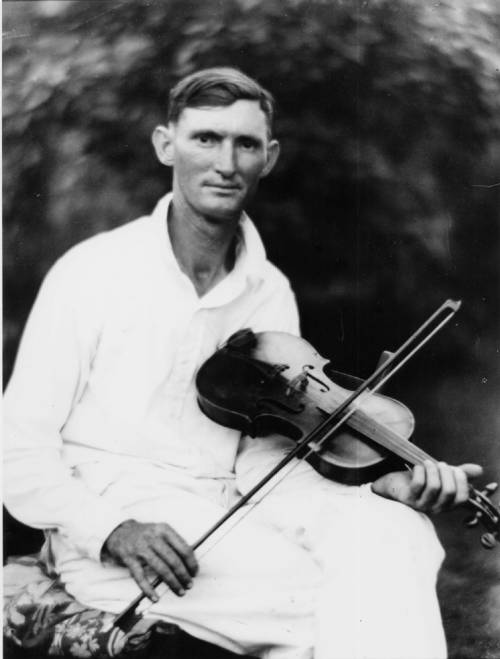 Library of Congress recordings of older associates such as Bev Baker and Luther Strong, make clear that Stamper was the last known living representative of what might be called a "classic" eastern Kentucky style of fiddling.  Other 19th century fiddlers that were particularly influential in the development of Stamper's style include his uncle, Daniel Triplett, Shade Slone, a Civil War veteran from the Pippa Passes area (Knott County), "Black" Hiram Begley (Leslie County), and Si Terry.

This style, with local and regional variations, was probably the dominant fiddling style throughout the southern Appalachians. It developed as it did because at the time, the fiddle was mostly played without accompaniment.  This allowed the fiddler a great deal of freedom in timing and self-expression through idiosyncrasies of tune structure and variations in the melodies.

The instruments commonly associated with the fiddle - the banjo and guitar - did not appear much in eastern Kentucky before the Civil War, and the early 1900's, respectively. The fiddle music of areas such as southwestern Virginia is closely entwined with the rhythms of the banjo and guitar. In contrast, Stamper's playing requires an accompanist to adapt to his sense of timing and tune structure. Many of his tunes are not well suited to accompaniment at all.

Stamper's bowing was very vigorous and energetic. There was strong emphasis on the push, or up stroke, giving a strong pulsing beat, especially when beginning and ending phrases of tunes and between parts in tunes. Phrases are ended with an abrupt upward motion of the bow, drawing out the last note as long as possible, then returning to the tune with a long downward stroke that again would draw out the melody in a way that gave the rhythm of the tune a pronounced pulsing, or wavelike feel. He also used long sweeping motions of the bow interspersed with more explosive bursts of quick back and forth sawing patterns that often gave a rather syncopated feel. He wielded the bow with his elbow held fairly high, allowing most of the bow work to be achieved by his elbow, wrist, and finger movement.

He tuned his fiddle about a full step below standard pitch, and the bridge was cut with a very shallow curve. Both of these practices allowed him to play two and sometimes three strings simultaneously, and gave his playing a very full, deep sound. This, and his sense of timing, gave many of his tunes a very dark, mysterious quality which has always been closely associated with older Appalachian fiddling.

Stamper's repertoire of tunes is characteristic of eastern Kentucky traditional music of the nineteenth and early twentieth century. He played very little music from later radio or recorded sources.  There are marked similarities to his music found in other regional collections as is illustrated by the presence in Jean Ritchie's repertoire of such tunes as Betty Martin, Boston, God Bless Those Moonshiners, etc.