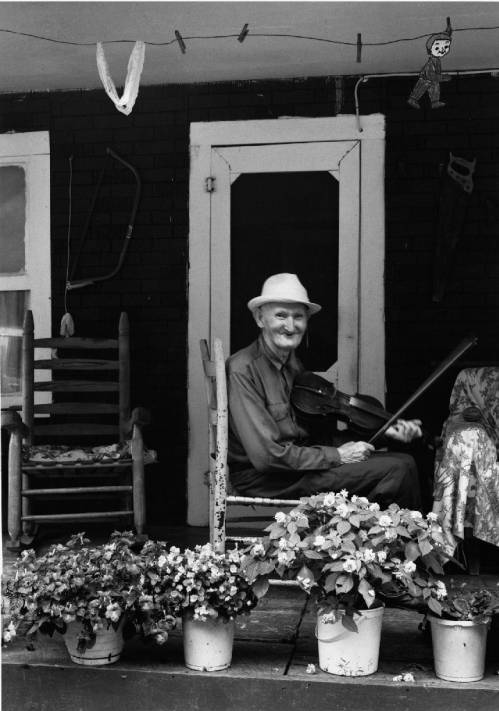 These recordings are mostly the work of musician-researcher, Bruce Greene, who has documented the repertoire, technique, and lore of several dozen traditional musicians from 38 southern and southeastern Kentucky counties.  The three 1986 tunes came to Greene from the collection of Bob Butler.  The keys and tunings are described as if the fiddle was tuned to standard A440 pitch. In reality, Stamper's fiddle was tuned a good step below that pitch, so when he played a tune that is listed as key of A, for instance, his pitch was more like the key of G. Tuning is to Stamper's preferred pitch. The given tuning describes the relationship between the strings.

Key of G, Fiddle tuned gdad. Recorded 01-06-77. Because of the implications of the title, Stamper considered this "the oldest tune ever made." This tune is also known in eastern Kentucky as Betty Baker. John Salyer of Magoffin Co, KY played a version and called it by both names. His son Grover recalled a verse, "Went over the hill to see Betty Baker, She was asleep and I could not wake her."

Key of A, fiddle tuned aeae. Recorded 01-06-77. Stamper learned this from fiddler Shade Slone, a Civil War veteran. Slone and others said that the tune was made by Morgan's soldiers while camped on John's Creek in Pike County during the raiding days in the Civil War. This tune was played with some variation all over eastern Kentucky and western West Virginia. See recordings by John Salyer, Manon Campbell, Ferdinand Lusk, and the Hammonds family of West Virginia.

Key of A, fiddle tuned aeae. Recorded 01-06-77. A member of a tune family including Fire on the Mountain and Granny Will Your Dog Bite. Known all over Kentucky and the southern mountains in general with much variation. This version is quite similar to Jean Ritchie's song Pretty Betty Martin, which she probably learned in Stamper's native Knott Co. They both sang "Pretty Betty Martin, tip toe, tip toe."

Key of A, Fiddle tuned aeae. Recorded 1-6-77. This is a different tune than the one that is a version of Indian Nation. It is related to a tune known in other areas of the south as Wolves A'Howling. It is a fine example of Hiram's use of the typical southeastern Kentucky fiddle technique of jumping from the open bass string to the open e string to add a nice rhythmical bounce to the tune.

Key of D, fiddle tuned adae. Recorded 02-11-77. Stamper said this was a Civil War tune about a soldier who was "taken up a holler and shot". He often confused its name with another tune, Last of Callahan, which he played in the key of A. It was also played by Santford Kelly of Morgan Co, Ky.

Key of A, fiddle tuned aeae. Recorded 02-11-77. A well known tune all over the southern mountains. This is a good example of the way Stamper takes a commonly known tune and adds very individualistic touches by holding on to notes and phrases, varying the tune each time through it.

Key of A, fiddle tuned aeae. Recorded 02-11-77. Similar to a version by the same name played by Manon Campbell of nearby Magoffin County. This name is attached to different tunes throughout the South, the unifying feature being the imitation of the cry of the goose by the fiddle, often using harmonics on the low string, as Stamper does on this version.

Key of A, fiddle tuned aeae. Recorded 02-11-77.Stamper learned this from Shade Slone. It is a different tune than one by the same name as played by Luther Strong for the Library of Congress. Strong was a contemporary of Stamper, and they played against each other in contests. Stamper sang this verse, " How you getting long with your hog eye, hog eye, how you getting long with your hog eyed man? Sally in the garden sifting sand, Sukey upstairs with the hog eyed man."

Key of A, fiddle tuned aeae. Recorded 03-20-77. This is an old song, The Drunkard's Dream, turned into a fiddle tune. Stamper sang bits of the song but could not remember it all. It is a version of Lonesome John, a very popular tune in the Magoffin / Morgan County area.

Key of E, fiddle tuned edae, the low string an octave low. Recorded 03-20-77. Stamper considered this his showpiece, and said he had won contests with it over the years, It was a popular tune in southeastern Kentucky, and there are recordings of it by Luther Strong, Bev Baker, and Boyd Asher.

Key of A, fiddle tuned aeae. Recorded 06-18-86. The full name is "Kiss Me Quick My Papa's Coming." The name is found throughout the South and, as in this version, a kiss is imitated by plucking a string or sliding on a string. Stamper's version is more commonly known in Kentucky as Cluck Old Hen. A similar version by that name is played by Jim Bowles of Monroe County. Buell Kazee and others in Magoffin County played a similar version on the banjo.

Key of A, fiddle tuned aeae. Recorded 06-18-86. Stamper knew this as a Civil War tune, saying that during starvation times during the war, people gathered these wild nuts and ate them to survive. It is a rare tune in eastern Kentucky, although it seems to be related to "Huldy in the Sinkhole", as played by Birch Patrick of Magoffin County. Other tunes by this name have been found in Virginia and West Virginia.

Key of G, fiddle tuned gdad. Recorded 06-18-86. Known more often in eastern Kentucky as The Indian Squaw. It was played by Alva Greene of Elliot County and Ed Haley. Stamper sang, "Way down yonder in the Arkansas, Two little Indians and one old squaw, Sitting on the banks of the Arkansas." He said the remainder of the verse was then whistled.