Tradition, Race, and Gender in the Celebration of Traditional Music

Appalachian Sound Archives Fellow Deborah Thompson focused on the ways race and gender are represented in Appalachian music, particularly in the context of such events as Berea's Celebration of Traditional Music. 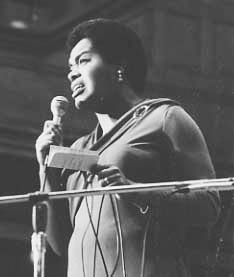 Race in the CTM

In some cases, there has been an attempt to link black and white music from the region together. For example, Joan Salmon-Campbell, a minister from Washington, D.C. who was invited to perform in the 1977 CTM while she was on campus for another event, introduced her rendition of “Black is the Color” in this way:

I’ve done lots of festivals, but this is the first time I’ve done an Appalachian festival, and I’m delighted to participate, because you made me do some homework. I am delighted to find out that a lot of the traditional music of my people really come out of and feed a lot of the music we’ve been singing tonight, especially the music that this gentleman (Cliff Carlisle) just finished playing.

Ed Cabbell, a scholar, singer, and founder of the John Henry Memorial Festival in West Virginia, was on the CTM schedule in 2000 and 2001. In 1978, he introduced “Uncle” Homer Walker, a fine “pre-blues” banjo player who sang and played some songs from slavery times and was one of the musicians that worked very actively with the John Henry Festival:

…one of the things we try to do here, seeing he’s sitting here, now with Uncle Homer playing the banjo, is to make an awareness of blacks in the mountains and the kind of music that we have done along with everybody else in the mountains since we’ve been over in here. Since, according to my research, about 1716 in what is now called West Virginia, so our heritage goes back about as long as anyone else’s in the mountains. And Uncle Homer is going to do a few standard tunes here on the banjo.

Ed Cabbell takes pains to normalize “Uncle” Homer’s performance and his repertoire by placing him “along with everybody else in the mountains” and characterizing his banjo tunes as “standard,” even though Mr. Walker’s style is somewhat more free-flowing than many white banjo players and he performs songs learned from slave traditions.

Several other performers might be considered to be “cross-over” performers, with repertoire and styles that are shared by many white musicians. Bill Livers was a fiddler and singer from Owen County, Kentucky that benefited from the folk revival – he was “discovered” by young, white, urban “back-to-the-landers” in the 1970s and enjoyed a burst of musical activity late in his life. While he was technically from outside Appalachia, he was a Kentucky native and played many tunes also common in white repertoires. Sparky Rucker, a singer, banjoist, and guitarist from Knoxville, Tennessee, was a frequent performer at the CTM (1975, 1976, 1981, 1986, 1994, and 2002) and presented the 1994 Symposium on “Civil War Music.” His music includes a mixture of blues and gospel styles, as well as old time and country. Earl White, fiddler and founding member of the Green Grass Cloggers, performed in 2004 and spent several days on campus speaking with students about his experiences. Part of his presentations included discussions of being African American in a musical scene and type of music (old time string band music) most often connected with white musicians.

There have been many blues guitarists in the CTM line-up, the majority of whom are African American. The Foddrell Brothers performed in 1978, 1982, and 1983, one of whom is the proud parent of three Berea College alumni. Nat Reese, from Princeton, WV, plays “a mixture of country blues and Delta blues” and performed several times – in 1980, 1990, 1991, 1998 – and will return in 2006. Some of the performers were from admittedly marginal areas of the region, but represent the black tradition of the region: Etta Baker, only one of two African American women to perform at the festival, is from the Piedmont of North Carolina (Morganton) and performed in 1983; Buddy Moss, from Atlanta, GA and Washington, DC (1978); Robert “Bud” Garrett (1984); Drink Small from Columbia, SC (1980); Moses Rascoe in 1989 (York, PA). Eddie Pennington from Princeton in western Kentucky (1999) and Cliff Carlisle (formerly of the Carlisle Brothers with his brother Bill) from Lexington, Kentucky, are white guitarists who also play blues guitar.

Much more can be done with questions of race in the CTM. My study has been very broad and descriptive – mostly just trying to determine who appeared at the festival, how it was conceived and initiated, and how these social forces worked. One thing in particular that would be most important would be to have someone with a broad knowledge of African American music and Appalachian music analyze the repertoires and playing styles of the performers in the CTM to help broaden our understanding of the diversity of African American traditional music, both in the Appalachian region and in America more generally.