There have only been two murders committed on Berea College’s campus since its founding - the victims were Opal Sturgell in 1937 and Lin Cong in 1994. There were similarities between both crimes, first and foremost being the motive of both crimes, the fact that both women knew their assailants, and both women were shot.

Opal Sturgell was shot and killed by George E. Wells on 15 August 1937 near Lincoln Hall.

Opal Sturgell was born on 15 September 1917 in Cherokee, Lawrence County, Kentucky. Her father, Marion Louis Sturgell, was a farmer and by the time she enrolled at Berea, her family was living in Houckville, Kentucky. Opal graduated from Blaine High School in 1936 and entered Berea College that September.

While at Berea, Sturgell was a member of Alpha Pi, YWCA and Harmonia. Opal Sturgell had known George E. Wells since they had gone to high school together. He had reportedly asked her to marry him then, but she had refused. When they came to Berea, he continued to pursue her. Wells had come to Berea College as a freshman in 1934, and was a junior when Opal arrived in 1936. According to various interviews, including an account from Opal’s older sister who was a school teacher in Lawrence County, Wells had been told multiple times to stay away from her, by her and others including the dean of the school at that time. Although Wells was a good student and active in several campus groups, during the spring term of 1937, his grades began to slip.

On 15 August 1937 Opal was outside of Phelps Stokes Chapel with another Berea student named William Anderson when they were approached by Wells. Wells asked if he could speak with Sturgell personally, and she said that he could say what he wanted, but he could do it in front of Anderson. He still pushed speaking with her privately, but she refused. At that he said, “If that’s the way you feel about it, okay - you may be sorry,” and he left.

After that, Sturgell and Anderson began to walk and were near Lincoln Hall when Wells came at them from behind a clump of bushes. He grabbed Opal and shot her while Anderson tried to get between them. Wells shot her twice more. He then aimed the pistol at himself, and before Anderson could tackle him, Wells ran. Anderson later reported that Sturgell tried to whisper something to him right after the shooting, but he was unable to hear her. She died at Berea Hospital a short time later; it was exactly a month before her twentieth birthday.

In the time after the shooting, all roads and train stations in the area were put on watch for Wells, who had fled from the campus. It was believed that he ran only for a short time on foot before it would have been most logical for him to board a train headed for Eastern Kentucky. Police were monitoring the road from Berea, and all the train stations were put on watch for him. Police went to his family's home in Floyd County and waited. He was never found, despite the police’s best efforts. They searched for him over the years, searching near and monitoring his home and other places in the mountains, but this resulted in nothing. 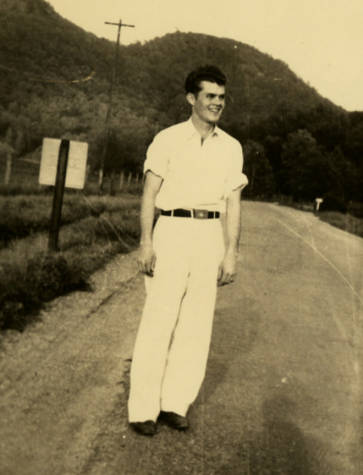 Where flowers bloom along the road of life
The weary traveler breathes their fragrance sweet,
and thus forgets his daily toil and strife,
Engulfed in that which could make life complete
All petals hold within their form so clear,
A beauty which the open eyes may see,
and find that they in all their glory
Are reflections of the great reality.

Thou are a flower blooming in the spring
Whose loveliness is glorious divine.
Thy radiant glow and cheerful smiles may bring
To someone happiness and joy sublime
And courage great to help him to be true
Along the path made beautiful by you

Lin Cong was shot and killed by Zhou Wang on 25 January 1994 in Kettering Hall.

Lin Cong was born in the People’s Republic of China, in Shanghai on 16 August 1972. She was a citizen of China and had come to the United States to study in September 1990. Her father’s name was De Zi Cong, and he was an Associate Professor at the East China University of Chemical Technology. Her intended major was Mathematics.

Lin Cong was a very gifted math student, and her professors are reported as saying that she was very talented. While at the college, she met another student who was in her major and also from China, named Zhou Wang. They met in August of 1990 and were married in Berea in October, when they moved to an apartment off campus. He was several year older than her, and graduated a year before her. At that time, he entered into Miami University’s graduate program, hoping to be a statistics researcher. He was 24 at the time, and Cong was 21. He had been driving down on the weekends from Oxford, Ohio, to visit Cong where she was living in Kettering Dorm.

Although it is hard to place the motive and blame on a single thing, the murder of Lin Cong can be put mostly to jealousy. After living away from Berea, Wang suspected that Cong was seeing another man. He had visited her and according to a friend, he had found a letter to her from another man in the mail box that they shared. He returned to Oxford, shortly after. Later accounts from him say that at that time he was in great emotional upheaval. After that, policed suspect that he had bought a handgun at All About Sports store in Cincinnati.

On January 25th, a Tuesday, Wang came to Berea, and was let into Kettering and went to Cong’s room. At that time, there was no check in procedure for visiting male students, and he was allowed in without resistance. He was her husband, and no one would have thought much about it. It was about 7:15 p.m. when he made his way up to her room, where he said he first tried to strangle her, but she got away. After that, he fired his .38 caliber pistol, emptying all six shots into her head. After that, he said that his intentions had been to shoot himself as well, but that he had been too scared. He walked down stairs, into the lobby of the dorm and asked repeatedly for someone to call the police. When the police arrived, they found Cong in a pool of her blood on the floor of her single room with the handgun on her bed. There were no witnesses of the murder.

“At approximately 7:15 p.m. Tuesday, Lin Cong, a 21-year-old senior from Shanghai, The People’s Republic of China, was shot to death at Kettering Residence Hall on the Berea College campus. The suspect, Zhou Wang, a 24-year-old Miami University student from Oxford, Ohio, and husband of the victim, has been arrested and charged with murder. The incident was a private encounter between husband and wife and no one else was harmed or threatened. The victim was living in a single room and there were no witnesses to the event. The suspect voluntarily surrendered and was taken into custody by the Berea Police Department within minutes following the shooting. Head residents and counselors, including the college psychologist, began to provide counseling to students on Tuesday evening. This activity will continue as long as necessary. A memorial service has been scheduled for 3 p.m. Thursday at Phelps Stokes Chapel. A convocation by Concert Choir, originally scheduled at that time, has been rescheduled for 7 p.m. Also, faculty and staff are asked today (Wednesday) to refrain from making unnecessary phone calls on campus so that communication lines will continue to be available. The incident continues under investigation by the Berea Police Department, the Madison County Coroner’s Office, and Berea College Public Safety." - John Stephenson

Wang plead guilty to the murder of his wife. He was sentenced to 20 years in prison by a Madison Circuit judge with possible parole after 10 years. Cong’s parents were notified of her death by an interpreter by Madison County Coroner Embry Curry. At the time, Curry said that he expected Cong’s body would be flown back to China.

Suggestions on How to Use this Article - Research Questions

How might these incidents and the sources used to create this article be useful in a larger course assignment or research page? See below for some possible examples.