Julia Britton Hooks was born in Frankfort, Kentucky, on May 4, 1852.  Her full name was Julia Ann Amanda Moorhead Britton Hooks.  Her parents, Laura Marshall and Henry Harrison Britton, were both free African Americans living in the slave state of Kentucky.  Her father was a carpenter.  Her mother was a freed slave of a biracial ancestry, whose father was a well-known Kentucky public official, Thomas F. Marshall.  Julia was exposed to and excelled in music from an early age.  She discovered the world of music through her mother Laura, who was a well-educated, intelligent woman as well as a talented singer and a musician.  Laura encouraged and instilled love for education, music and public service in both of her daughters.  She especially passed on her talent in music to Julia.  In short, her family was well respected, honored, and trustworthy within the circle of prominent and affluent Kentucky families. 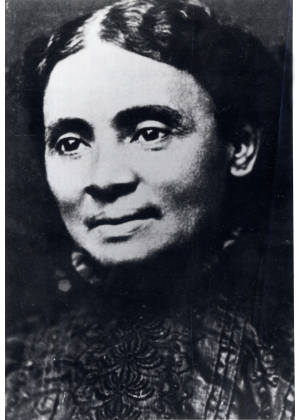 Julia grew up in Lexington and, along with her sister Mary E. Britton, received a good education, first in Louisville at Mr. Gibson’s school for colored youths.  Later she studied music under the instruction of an English woman.  Julia so skillfully and gracefully performed some of the most complex piano pieces by well-known composers that she, along with her mother, was invited to small concerts or gatherings organized for or by Kentucky’s aristocratic families and friends.  Many, especially in the Kentucky press, recognized her as the “Wonder of the Age” due to her prodigious talent and knowledge in music.

In 1869 Julia enrolled in Berea College to study music.  She graduated in 1874 as the second African American female graduate of Berea College.  For two years following her graduation, Julia served as Berea’s first African American faculty member.  She taught music.  In 1872 she moved to Greenville, Mississippi.  There she continued to teach in school and soon married Sam Wertles, who died the following year due to the yellow fever epidemic.

Julia Britton actively promoted and created opportunities in education for the black youth of the South.  In 1883, along with Anna Church, she opened the Liszt-Mullard Club.  With the creation of this club, she was able to raise money to provide musically gifted black students to study music on a scholarship.  In 1892, in response to the poor public education that black youth received in Memphis, she founded the Hooks School of Music and the Hooks Cottage School, which mostly provided pre-school and elementary education.  The Hooks School of Music produced distinguished student musicians such as Sidney Woodward, Nell Hunter, and W.C. Handy.  However, youth were not the only group whom Julia Britton helped.  In 1891, she was a charter member of the Orphan Home Club and the Colored Old Folks Home, both of which provided accommodation for orphans and elderly African American women.  She taught and worked on improving public education in the states of Kentucky, Mississippi, and Tennessee for almost twenty-eight years.

Her life as a civil-rights activist began in Mississippi, where she participated in a successful campaign for Blanche K. Bruce’s election to serve as one of the first African American representatives at the U.S. Senate.  Once Britton moved to Memphis, Tennessee, in 1876, she became even more engaged in public service, education, and civil rights movements.  The same year she married her second husband, Charles Hooks.  Together they administered the detention home for young African American lawbreakers from 1902 until 1917, when an escaping young criminal killed her husband.  Even after the tragic loss of her husband, she did not abandon the administration of the detention home; instead, she fully dedicated herself at advising and helping the troubled youth with their problems.

Britton Hooks disapproved of the Jim Crow segregation laws and actively protested against racism and inequality, which occasionally led to her being arrested and fined.  In 1881 she was arrested at the Memphis Theater because she refused to move to the “colored balcony” from the “white balcony” where she chose to sit.  Since she was an educator, she also campaigned against the segregation of African American youth in classrooms of public schools.

In 1909, Britton Hooks became a member of the NAACP in Memphis.  She took part in the suffrage movement and campaigned for women’s right to vote.  Alongside her sister, she was the president of Women’s Improvement Club in Lexington.  She also met Ida B. Wells, with whom she shared her passion, determination and dedication for justice, equality and change.  In 1895, the African American Encyclopedia published her article called “The Duty of the Hour.”

Julia Britton Hooks died on March 10, 1942, at the age of ninety.  She lived a long life with compassion, courage, and a strong belief in justice, equality and good education for everyone.  Her legacy and example of commitment to public service and education lives on.  Her legacy continues in the work of her grandson Benjamin Hooks, who served as an executive director of the NAACP from 1977 to 1992, as well as in the work of her two sons, Henry and Robert, who both became photographers and founded their own studio called the Hooks Brothers Photographers.  Her sister Mary Britton was similarly politically involved.  In addition to being an educator and medical physician, she was a vigorous civil activist, journalist and social worker.  Julia’s brother, Tom Britton, was a jockey of a great fame and talent.  In his career as a jockey, he won the Kentucky Oaks on Miss Hawkins in 1891, and finished second in the Kentucky Derby on Huron in 1892.

Julia Britton Hooks dedicated her life to social service work.  Her compassionate attitude to help and serve her community is an exceptional example of Berea College’s mission.  She was a devout Christian, a talented musician, a church choir director, an exemplary humanitarian, and a civil rights activist.   She did not permit racial prejudice and inequality hold her down; instead, she worked hard to spread joy and peace through her music and public service.  She holds an honored and respected position in Berea’s history, as well as in the history of Kentucky and Tennessee.

Berea College awarded Julia Britton Hooks with the John G. Fee honorary award that many notable Berea alumni have received for their service and dedication to the community.