Juanita M. Kreps (1921 - 2010) was a Berea College alumnus whose rigorous work in the field of economics allowed her to hold many prestigious titles.  She was the first woman to serve as Secretary of Commerce (under President Jimmy Carter).  She was the fourth woman in American history to serve in a Cabinet post.

Juanita Morris was born on January 11, 1921 in the coal mining town of Lynch in Harlan County, Kentucky.  Her parents, Elmer M. Morris and Larcenia (Blair) Morris, were of Scotch-Irish heritage.  The name “Juanita” her mother’s choice, as she believed it was possible that she had some Spanish blood.

Juanita was the youngest of six children.  When she was four years old her parents divorced, and she went to live with her mother until she was enrolled in a Presbyterian boarding school at the age of 12.  Recalling growing up during the Great Depression, she said, “Everyone was having economic problems, and we weren’t any worse off than anyone else.” 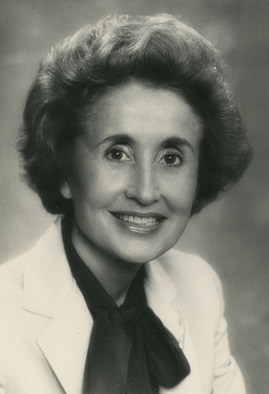 Morris entered Berea College in 1938.  Upon taking her first class in Economics at the college, she decided to declare it her major.  In an interview with Donna Landry of the Washington Post, she explained, “I was always interested in social problems.  If you read the newspapers and had a sense of where the world was, you couldn’t help being concerned.  I thought economics would give me more insight into what was going on.”

During her first years at Duke University, she taught part-time and served as a junior economist with the National War Labor Board in Atlanta in the summer of 1943, and then in Washington in 1944.  As she worked toward her doctorate, she served as an instructor and assistant professor at Duke. She lectured at Hofstra College and Queens College before returning to Duke to teach economics as a visiting associate professor and eventually full time professor.  In 1972 Kreps was named to the James B. Duke professorship, the university’s most prestigious chair.  In 1973 she was appointed vice-president.

Kreps specialized in labor demographics, with a particular emphasis on the employment of women and older workers.  One of her better known books, Sex in the Marketplace: American Women at Work, served as a review of women’s labor force activity.  In her book, Kreps answered questions such as why women enter the same occupation year after year, why their proportion of advanced degrees remained so low, and why so many exchanged the monotony of housework for equally dull and low-paying office jobs. Although the number of women in the workforce had significantly increased since 1920, Kreps pointed out in her book that “they continue to staff the clerical jobs, the elementary classrooms, and the sales rooms; they are almost never vice-presidents or high school principals or hospital administrators.”  Although Kreps refused to be labeled as a women’s liberationist because she disliked the term, she agreed with many of the positions taken by feminist leaders.  She urged women to consider taking up careers in the marketplace and to reject the concept that a successful marriage alone fulfills a woman.

In 1975, Kreps organized and directed a conference at the Arden House in Harriman, New York, called “Women and the American Economy.”  There she produced a policy document endorsing the Equal Rights Amendment, recommending stronger affirmative action programs at universities, and encouraging young women to “recognize the probability of future work in the marketplace.”

As a highly respected economist and education administrator, Kreps was appointed the first woman director on the New York Stock Exchange and several blue chip companies such as Western Electric, R.J. Reynolds Industries, Eastman Kodak, and J.C. Penny.  In the Congressional Quarterly, she was credited with having a “penetrating style and notable independence in her corporate dealings.”

Kreps was invited to meet with Jimmy Carter after his election as president to brief him on economic issues.  A few months later, she was appointed Secretary of Commerce.  She was the fourth woman in American history to be named to a Cabinet post.

On August 11, 1944, Morris married Clifton H. Kreps Jr., a professor of banking at the University of North Carolina. They had three children: Sarah, Laura, and Clifton III.  She once said that she enjoyed fresh flowers, expensive clothes, classical music, and Duke Ellington’s jazz.

Dr. Kreps was awarded an honorary degree from Bryant College in October 1972.  Berea College awarded her the honorary degree of Doctor of Laws in 1979.  She was named Dean of the Woman’s College at Duke University, elected as the first woman to serve as Alumni Trustee at Duke, and served as its Alumni Association’s National Alumni Fund Chairman between 1983 and 1984.  Additionally, Kreps received the B’nai B’rith Outstanding Citizen Award, the 1981 Achievement Award from the Education Foundation of American Association of University of Women.  She was the first recipient of the Duke University Distinguished Alumnus Award and one of the first six recipients of the Outstanding Alumnus of Kenty Award.