John Gregg Fee was born on September 9, 1816 in Bracken County, Kentucky.  His father, John Fee, was of English and Scottish descent, and his mother Elizabeth Bradford claimed to be of Scotch-Irish descent.  In his early teens, for a brief time after his conversion to Christianity, he wanted to be part of the Methodist Episcopal Church, but with his father’s encouragement, he later joined the Presbyterian Church. 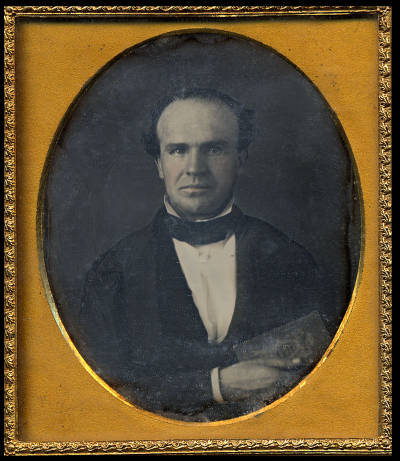 Fee was a son of a slaveholder and so from an early age he experienced and understood the scale of terrifying evils of slavery that affected spiritual and moral conditions of an individual and the community. It was this experience that led him to later become a Presbyterian minister and an anti-slavery activist and abolitionist, along with his wife. His mother was also an anti-slavery Quaker.

Fee studied at Augusta College for about two and a half years before deciding to pursue his education in classical studies at Miami University in Oxford, Ohio.  Later he returned to Augusta College and earned his degree there.  In 1842, he enrolled at Lane Theological Seminary in Cincinnati, Ohio to study ministry.  While a student, Fee acquired many good friends such as John Milton Campbell and James C. White, with whose encouragement he became an ardent abolitionist.

Once he returned to Kentucky, he preached against slavery despite many challenges and confrontations from pro-slavery fellow citizens.  His attempts to convert his father to embrace an anti-slavery ideology had been unsuccessful and did not improve his relationship with his father.  His anti-slavery ideology also made it difficult for Fee to obtain a permanent job.  Soon he left the Presbyterian Church due to conflict over the issue that the church continued to permit the membership of slaveholders, and Fee did not agree that slavery was a Christian-like activity.  Fee was disappointed that many Christian believers were still supporting slavery.  Consequently, he started to believe in non-denominational and non-sectarian Christianity, and he began to preach anti-slavery through his writing.  When Fee graduated from Lane Seminary his father gave him 409 acres of land in Indiana; shortly thereafter, he sold the land in order to purchase the freedom of Juliet Miles, the slave woman who had raised him, and to finance publication of his first anti-slavery manual.

On September 26, 1844, Fee married Matilda Hamilton, whom he had known since childhood.  Like Fee, she was also from Bracken County, Kentucky.  They had six children, but some of them died in early childhood.

It was not an easy task for Fee to continue to operate Berea College in pre-Civil War American society.  Many people in the state of Kentucky voiced very strong pro-slavery sentiments and actively protested against abolitionists.  Therefore, Fee sought financial and general support from abolitionists and anti-slavery activists throughout the country.  For instance, in 1859 he attended the AMA Convention in Boston, Massachusetts, where he raised funds for the Berea school.

Due to active and violent opposition from pro-slavery sympathizers in 1859, many of Berea’s citizens were forced to flee the town, with Fee and his family among them.  Consequently, Fee and his family lived in exile in Cincinnati, Ohio, until they were finally able to return to Berea in 1864.  Once Fee returned, he spent a lot of his time preaching and teaching former slaves at nearby Camp Nelson.  After the Civil War ended, Fee fully devoted himself to enlarging the Berea school into a College.  Fee envisioned not just an interracial education, but the coeducation of women of all colors.  Thus many freedmen and females were accepted to the school, and in 1873 the College awarded its first degree.  John G. Fee was the President and Supervisor of the Board of Trustees. At the end of the nineteenth century, under the administration of President William Goodell Frost, Berea College was recruiting students from the Appalachian region as well as women and African Americans.

John G. Fee died at the age of 85 on January 11, 1901.  Reverend James Bond, an 1892 graduate of Berea College, gave a memorial speech at Fee’s funeral ceremony.  Reverend Bond commented that Fee was a man who was a “friend to each and all and sought the highest good of all alike.  He loved men, not conditions; humanity, not races or nationalities. … John G. Fee was a benefactor of the world. His name and deeds are the heritage of humanity.”  Bond’s remark about Fee that “another of the long list of Americans who have made the nineteenth century famous has gone,” is one with which many would agree.

To this day Berea College serves as a legacy of John G. Fee’s hard work, vision, and anti-slavery activism.  He was an integrationist who had a vision of an equal and just society that was more than 100 years ahead of his time.  Berea College’s mission gives equal academic opportunities to individuals of African-American and white Appalachian backgrounds throughout the nation, as well as to individuals of other cultural backgrounds from around the world.  Fee’s message of impartial love and the equality for all people of the world continues to thrive from one generation to the next.

Where is John G. Fee buried?
John Gregg Fee (1816-1901) is buried in the Berea Cemetery, which is located on Estill Street (Route 1016) in Berea, east of the Berea College Campus. Map and directions to Berea Cemetery courtesy of Google.

Where is John G. Fee's house?
The first home of John G. Fee burned in 1875, and his second home was razed in [196?]. The land which Fee owned, where his home was located, now holds several homes and streets. There is a stone marker, located down the driveway of [address here] which designates the corner of his home where his study was located, which served as the location for the signing of the charter establishing Berea College. Map courtesy of Google Maps.