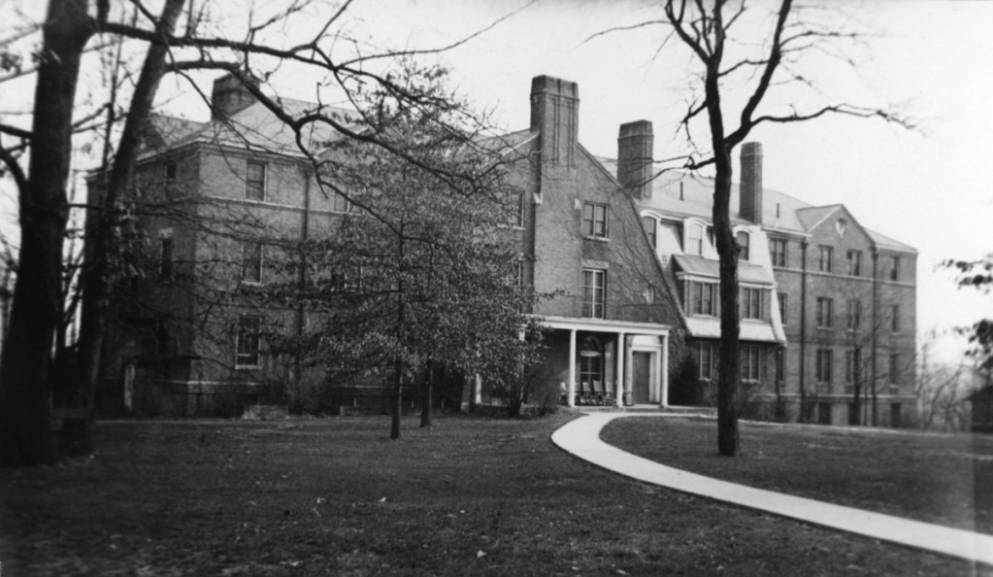 Cleveland Cady described James Hall as built in a "cozy domestic and· cottage style to which the Dutch Colonial is fitting." This women's residence hall on the Academy Girl's Campus was financed by a $40,000 gift from Mrs. D. Willis James who wished to honor her husband. She pledged the money to Mrs. Eleanor Frost in January and died in April, 1916, and so never saw the completed building. Plans were discussed in March and completed in April, 1917 (Frost Diary; PCM, April 10, 1917; Berea Citizen, September 5, 1918, 2). The full site plans, having been discussed with the Olmsted Associates, proposed one additional Academy women's dorm and a recitation hall placed in an open quadrangle opposite an equal number of Academy men's dorms; this Academy Campus quadrangle was bisected by Big Hill Pike.

President Frost had just returned to campus from hospitalization for restorative health reasons. Upon his return, he proposed Union Church now be constructed at a diagonal to the Public Green (this was in opposition to earlier parallel to the street proposals); and he proposed it was time for the school to start construction of a girls' quadrangle for the Academy campus (E.C. Whiting report to Olmsted Associates, March 27 & 28, 1917). After President Frost had written to the Olmsted Associates proposing locations for the new buildings on the Academy Campus, Howard-Taylor, College Bursar, wrote in private expressing the Board of Trustees' "very strong objections ... that the classroom building would never be put On the south side of Big Hill Pike. Other Departments must be extended before the Academy can possibly be allowed to grow". Taylor asked for confidentiality knowing that Frost "was giving up the Presidency [shortly] ... and ending his tenure at Berea" (Howard Taylor to Olmsted, April 2: '1920).

Even in retirement Frost continued to "meddle" in the proposed placement of College buildings (Frost to Olmsted, September 13, 1920). The last years of the First World War were difficult years for the nation. But because of the personal loss of Cleveland Frost whose troop carrier was sunk by a Germari U boat, it was a great personal tragedy for both President and Mrs. Frost. James Hall was the only building actually built from the Cady and Frost proposed three building Women's Academy quadrangle. During the 1920s, the Board of Trustees and President William Hutchins closed the Academy and James Hall became a residence for Foundation School Girls.

Boone Cottage was moved south and east to make room for the construction of James - Hall which was then located on the edge of the ridge to allow beautiful views of the mountains to the east. Because of the difficult steep site, Cady said the southeast corner looked like "a cottage mounted on a grand stone pedestal" twenty-one feet above grade (Cady letter to Frost, April 16, 1917). Due to the height, the Prudential Committee voted, with the consent of Cady, to use the Berger form of construction for the basement and subbasement. The construction above the basement was to be like that of the earlier Talcott and Kentucky Halls (PCM, May 4, 1917). Because the site fell so rapidly this method of wall construction (the walls were twenty inches thick) had to be used and an enormous amount of soil had to be hauled to fill the front yard to grade. President Frost, who "micro managed" every major campus construction project, was away from campus on health leave from July 1917, until June 1918, so saw little of the construction. Limited information was recorded concerning this project and since Frost was away, his notes/journal can not be consulted as it can for other construction projects. Academy girls first occupied the building during September 1918 (Berea Citizen, September 5, 1918, 2). Two months later, World War I ended with the cessation of battle on November 11, 1918, and Russia was in the midst of the Bolshevik Revolution. This was a bittersweet autumn on campus: a celebration of another major building project completed but also mourning for the loss of Berea and Kentucky men who had lost their lives in this European war. Cady died the following year.

For the four-story residence hall, Cady's design called for the use of common red brick, slate roofs on the three-story frame and limited amounts of limestone. The building had baths, a "family parlor" each floor and rooms for two resident workers. Every room had two closets, a bureau, two desks, and two cots. The large basement served as an assembly room. All four levels of the building were exposed on the -east and south. James' Hall had a handsome main floor parlor with a low simple Doric colonnaded porch in front that provided protection at the entrance and a balcony for the second floor lounge. Set within what would otherwise be a symmetrical structure, the asymmetrically placed entranceway was accentuated by a truncated gambrel roof line and large irregularly placed chimneys. The main double door entrance was framed by dressed limestone and crowned by a fan lit arch with projecting keystone and impost blocks. The main floor parlor had two brick arched fanlit doors opening onto the porch, whereas the second floor balcony window doors were crowned with both limestone lintels and brick relieving arches.

A renovation from top to bottom was undertaken during the summer of 1927, ten years after it had been constructed (Berea Citizen, July 28, 1927, 1). Fire escapes., new wiring, new baths, and a fire suppression sprinkler system were added in the 1950s (BTM, August 16, 1951; April 23, 1954). Another renovation was completed during the summer of 1969 (PAR), but a more extensive renovation of the building started during September, 1981, and included painting, plastering, carpeting, and lighting improvements for rooms housing eighty women. This work was done by student labor. An external firm installed a new slate roof, and new copper gutters and downspouts in 1981, at a cost of $100,000 (Berea Citizen, November- 19, 1981). 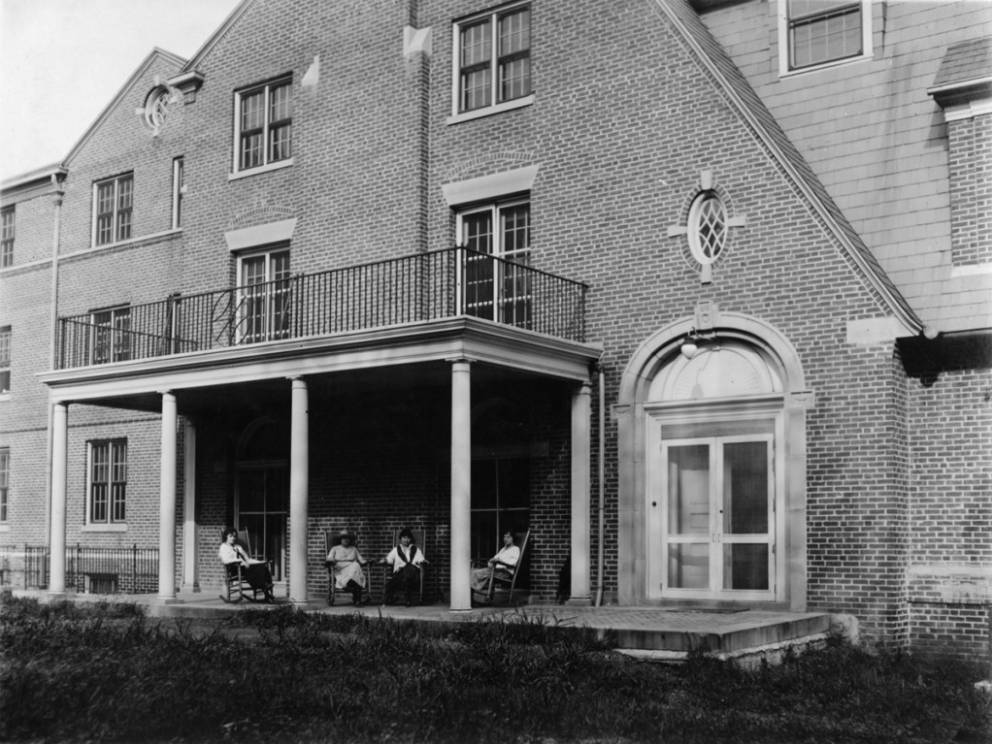 During the summer and fall of 2003, James Hall was fully gutted to the walls and supporting piers and rebuilt from the inside out. All utilities were replaced: plumbing, wiring and central heat and air; a chiller and electrical transformer were instilled on the east side of the residence hall and an ERU (energy recovery unit) was placed in the attic. The five individual floors were sub-divided into suites for four women per unit and in turn those units were arranged in groups of fours. Placed along an external wall, each suite was designed with an open central wash basin, shower and toilet room; two sleeping rooms were set to the left and right of this entrance-bathroom; each sleeping room was trimmed in oak and had one large double hung insulated window, two armoire/closets and two bunk beds, below which was a desk with drawers. All rooms were equipped with computer ports. These peculiar three-part suites were then arranged as groups of four units around an external central hallway-lounge with seating, laundries and kitchen accommodations. All sleeping rooms must be entered by first entering the bathroom space. ·Exposed but painted structural steel I-beams and posts support the ceilings.

James Hall's new main entrance space incorporates the original two large fireplaces with their original mantels, has a monitor's entrance room, restrooms and an elevator servicing all floors; but it now has none of the charm of the original Cady design. Entrances and narrow steel stairways are located at the end of the halls on the north (projecting into the parking lot) and south (built into and occupying part of the hallways). Because of the original site and the depth of the south end, the bottom two floors are only partial floors running half or three quarters of the way under the top three floors. Because the sub-basement was well below grade, windows had to be cut through the very thick poured concrete supporting walls. Those newly cut west windows were then protected by poured concrete retaining walls and metal grids so that indirect filtered light could reach the rooms. The roof was restored and all slate tiles and copper guttering was replaced. Contemporary colors were chosen for the linoleum, carpet, furnishings and paint. A strangely arranged five-roomed staff residence was incorporated on the north end of the building beside the residence hall parking lot and Prospect Street. The exterior of James Hall looks like the original Cady design except for the stair towers at each end. Students took occupancy during the fall semester, 2004.