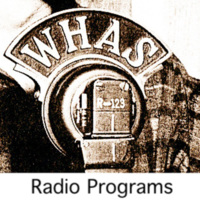 These guides are the work of Archives staff and scholars supported by the College’s Sound Archives Fellowship Program.

Going beyond the limitations of words on paper, these rare recordings make possible hearing in the present the same accents, emotions, and issues that entertained and informed a past generation.

These collections contain audio and / or video content available in the Berea Sound Archives or the Digital Archives (Berea College).  Click on the collection title for more information, a complete list of collection materials, and links to the digitized content.

Includes radio performances of the Cash Gospel Quartet from Rockcastle County, Kentucky on the WRVK program Sinclair Sunday Serenade during the 1950s and 1960s.

Recordings of Ernest Martin’s program of singing and preaching entitled Highway to Heaven. They date mostly from 1950 and were aired on a Frankfort, Kentucky radio station.  One additional was recorded in 1968 for WYGO in Corbin, Kentucky.

Includes recordings of Homer Ledford and the Cabin Creek Band on their radio program, Kentucky Traditions which was broadcast on station WSKV, Stanton, Kentucky from 1988 to 1997.

Renfro Valley Barn Dance and related programs originating from Renfro Valley, Kentucky mostly during the 1930s through the 1950s.

The Prichard Quartet and the Melody Five gospel singing group as heard weekly on Barbourville, Kentucky radio station WBVL during the late 1950s and early 1960s.

Includes television performances of the McLain Family Band and recordings of the Kentucky Blue radio program hosted by Raymond McLain.

Audio recordings of programs broadcast by Louisville, Kentucky radio station WHAS. The collection is especially strong in documenting a wide range of state, national, and world political figures and news events during the late 1930s, throughout the 1940s, and into the middle 1950s.