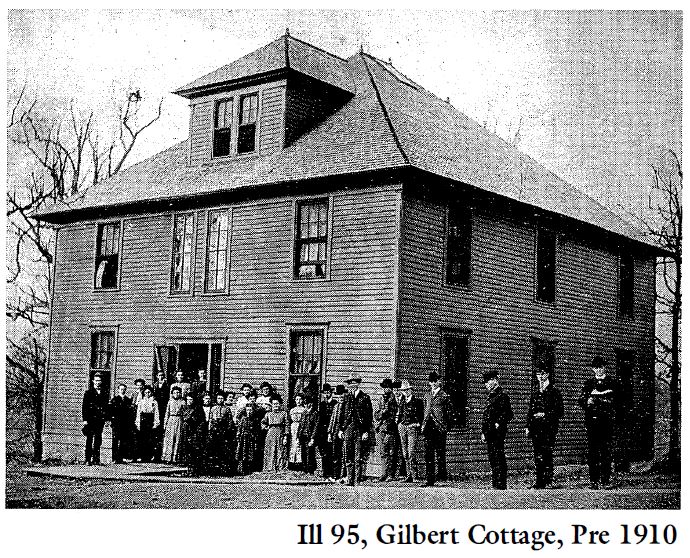 Built in the year Theodore Roosevelt assumed the Presidency of the United States after the assassination of President William McKinley, this wooden framed women's residence on Scaffold Cane Pike-Dixie Highway was built southeast of Ladies' Hall.
Gilbert Cottage housed the increased number of women students who were arriving on campus during the early decade of the Twentieth Century. Because of this enrollment need Mrs. Eleanor Frost "went into the field" during the fall of 1901, to obtain donations to build this building (PAR, June 1902). Gilbert Cottage, was named for Miss Katherine "Kate" Gilbert, a Berea teacher of Latin, French and German and "of the Higher English Branches" for twenty-eight years (1870-1898). Miss Gilbert was given an honorary degree by Berea in 1894. Upon retirement she had served the College longer than any other person except John G. Fee. In 1860, Miss Gilbert was sent to Kentucky by the American Missionary Association and was also partially supported in this call by her own home anti-slavery church in North Brookfield, MA. She came to teach Freedmen.

When first opened for occupancy, Gilbert Cottage housed a matron and fourteen girls from Perry County (Berea Citizen, December 12, 1901, 2). During the annual meeting of the Board of Trustees in 1902, the house matron sent a report saying: this residence "has been a comfortable home exclusively for mountain girls and is a distinct gain in our accommodations." This white symmetrical clapboarded, two-story residential scaled structure had a front porch (added in 1910) supported with rustic cedar posts and lattice. Dean Bowersox questioned the Board when bathrooms would be added to the residence. She said: "going to Fairchild was unhealthy and as of 1910, the women of Gilbert House did little bathing to speak of". New baths and better drains were installed that year; the whole residence was wired for electricity in 1917 (PCM, December 14, 1917); and it served as the French House in 1928. With the increased number of male students returning to Berea following World War Two, male students were housed in this cottage from
1948 to 1959 (BTM, May 6, 1948). Gilbert Cottage was torn down during the spring of 1959 to make room for construction of the Alumni War Memorial Building.