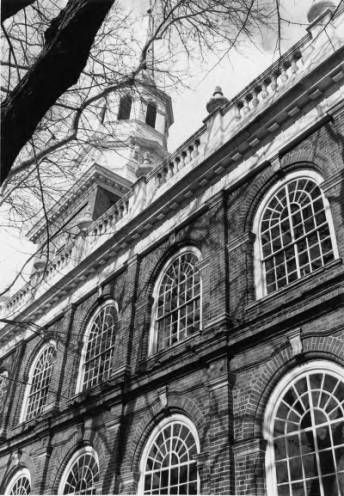 Mrs. Nathaniel P. (Helen Draper) Ayer and her nephew Wickliffe Draper gave funds to create the Jessie Preston Draper Memorial Fund that was dedicated to charitable purposes and the education of White students from the State of Kentucky (Berea Alumnus, 7:7, April 1937, 187). Wickliffe Draper oversaw this philanthropic fund and ultimately gave the whole fund ($194,000 worth of securities) to build this large college classroom building. Helen Draper Ayer, daughter of Jessie Draper, had been interested in rural Kentucky causes for some time and had frequently supported Kentucky Frontier Nursing. As indicated at the time of the gift, the moneys for the Jessie Preston Draper Memorial Fund were designated “to be used for the education of Kentucky mountain boys and girls of northern European descent,”—the Anglo Saxons of Kentucky. Miss Jessie Munger and her brother Henry C. Munger also gave a generous gift for the construction of this building ($50,000). In 1937 and during this latter part of the Depression, 66% of Berea students were Kentucky farm kids. At the same time in Europe, Spain was waging a civil War and Germany Was mobilizing for war. In comparison, Berea was a tranquil sylvan retreat from America and the world.

Charles Cellarius Worked on the building plans and specifications during the summer of 1936 and on December 10, 1936, he signed the ﬁnal contract for this three story structure. A year later he provided the plans for the landscaping, Cellarius’ commission was 6% of the cost of the building; during this same time period many architects negotiated a 10% commission. The Board of Trustees voted to begin construction no later than March in the following spring (PCM, November 7, 1936, November 23, 1937; BTM, November 13, 1936; BCABG, 5.39, box 3); but construction did not actually begin until the summer of 1937. Tennis courts and residential structures cum classrooms (Grammar and Intermediary school houses, “Academy Wooden shacks” or “Model Schools” as they Were called, [but designated Room 70 and 71 in a double house, Room 72 in single house and Room 73 and 74 in a double house]) were removed to begin construction (see Olmsted Ill 7). One of these classroom houses was a Sears Roebuck and Company prefabricated four room house.

Cellarius’ design is a fireproof, hand-made red brick, Flemish bond, Colonial Georgian structure which incorporates a taller more graceful version of the central tower of Independence Hall in Philadelphia, PA. The tower rises one hundred ﬁfty-four feet above the ridge and is ﬂanked and balanced east and west by main hallways and twelve classrooms on each side to occupy 56,000 square feet of space. The projecting Wings incorporate recessed arches capped with limestone keystones and windows, whereas the windows in the main block are ﬂush with the surface and are supported by ﬂat arches and limestone lintels. All exterior Wall surfaces are enhanced with ﬂat arches, limestone keystones, copper trim, a projecting string course and wooden sash windows that ride in metal frames set ﬂush with the brick wall. At the rooﬂine is a cornice and an entablature with dentils. The corners are enhanced with brick quoins and the base incorporates a molding. The fan lit arched, broken pedimented entrance tower is decorated by ﬂuted wooden Ionic pilasters and above that a Palladian Window is supported by brick Doric pilasters. Cellarius conceived the building “[growing] naturally out of its woodland setting” with its two-story Wings, three-story center and tower. The undecorated side wings are similar in appearance to the main classroom building of the College of William and Mary which is said to have been designed by Christopher Wren. In The Architectural Forum, June 1931, examples of academic architecture were illustrated. For example, Harvard’s Lowell House was a copy of Independence Hall  and the Baker Library at Dartmouth also copied Independence Hall (Jens Larson, architect). Brown University, Davidson and Hanover College had all chosen American Colonial Georgian as the style most suited to their respective campus settings.

This Lower Division academic building had a lecture room-theater seating about one hundred, a study lounge, halls dressed in green tile Wainscoting, ﬂoors of terrazzo and marble, mopboards of heavy dark gray slate and recessed built-in metal lockers. The main entrance was a grand white space of paired ﬂuted wooden Doric piers, an entablature of triglyphs, blind Roman arches, cast bronze stair railings, a dentil molding at the ceiling and eighteenth century glass lanterns. This space led to a pedimented entrance that opened onto the atrium of Danforth Chapel. Each classroom, entered through a dark oak door with transom, had a bookcase, closet, map case and corkboards. All rooms were linked to the Dean’s office by way of a central radio system. Ofﬁces for thirty faculty members were also included in the design. The cornerstone was laid September 11, 1937, and the building was dedicated on June 6, 1938. During September 1938, the ﬁrst classes were taught to Junior College students, those in their last two years of the Academy, who would later be designated as freshmen and sophomore students of the College.

Furnishings, most of the tables (136 which were 36 x 24 inches costing $8.75 each), desks and over 300 Goldthwait designed chairs (at $7.25 each), were made by student workers of Woodcraft (Berea Citizen, September 16, 1937, 1; August 4, 1938, 1; and June 9, 1938, 1+; PCM, December 14, 1937). Marble restroom partitions were chosen “even though they gave the appearance of extravagance” because they promised to be easier to maintain (PCM, November 9, 1937). Because of the late Depression, materials and labor were less expensive than in later years. For perpetual maintenance, additional funds ($200,000) were raised by the College and set aside as an endowed fund for the upkeep of this and all campus buildings. College reports, an Alumnus, a College catalog, “Birth of Berea” and photographs were placed in the cornerstone when it was laid. Construction was completed two months ahead of schedule and the whole was ready for classes in the fall (Berea Citizen, June 9, 1938, 5). Dedication services were held on the lawn in front of the building.

This “biggest structure on campus” and its classrooms replaced three model schools, the old music building (Hutchinson House) on the Academy campus, classrooms on Richmond Pike (Palace and Crystal), the old Post Office on Main Street, and a tin shop on Short Street to become home to the Lower Division (Berea Citizen, June 9, 1938, 3). In 1937, Berea divided its College into two divisions, an upper and a lower level; but in 1938, President William Hutchins and the Board of Trustees voted that this 1855 school-in- the-wilderness should become exclusively a college with only a small Foundation School. The Lower division consisted of sophomore and freshmen college students and high school seniors and juniors. These two academic divisions were not popular with faculty nor were they in sync with the current American Education practices; consequently, Berea closed its Academy and Normal Schools. 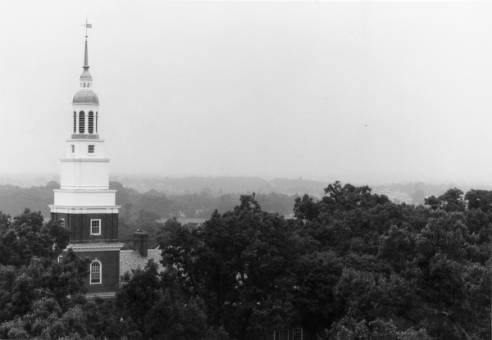 Draper Renovations: At various times after the Draper Building was built, small renovation projects were carried out on parts of the interior (1991-Center for Effective Communication; 1991-Ofﬁces; 1993-Classrooms) However, The Board of Trustees and various faculty committees began discussing a major renovation for Draper Building during the 1999-2000 academic year. The ﬁrst construction project took place during the summer of 2000 with the renovation of the tower.

A ﬁfty-six-bell carillon, designed and built ‘by the Verdin Company, Cincinnati, (the world’s largest maker of carillons) was installed during the summer. Suspended more than a hundred feet above the main ﬂoor, this four-and-a—half octave carillon is the largest in the state. The biggest bell Weighs 2,750 pounds, the smallest eighteen and a half pounds, but the combined weight of all the bells exceeds eleven tons. All the weight of the bells is supported by a steel frame that was constructed as part of this project. Before being placed in the tower, the bells were blessed during a centuries old service where internationally recognized carilloneur, Professor John Courter, assisted. The dedication and concert to be played by the. College organist, Courter, was set for October 27, 2000 (Berea Register, July 12, 2000). A carillon of /this size allows music with harmony, melody and rhythm. The bells are bolted to a steel frame and the carilloneur depresses a keyboard with both ﬁsts and feet to activate the clappers that in turn are moved by mechanical action. The largest bell has the College’s motto “God hath made of one blood, all nations of the earth” inscribed on it; the third largest has a Sanskrit poem inscribed; and the fourth largest has an inscribed verse from Psalm 109: “Awake my soul!” Two bells are named for former President John B. Stephenson and his wife ]ane, whose activist support made this carillon possible.

Cellarius had so engineered the concrete and steel construction of Draper Building that all interior walls could be removed except for various supporting piers scattered through the building. When gutted, the interior appeared to be a large parking garage. The Ecological Design Institute of Sausalito attempted to save and reuse some of the earlier 1930s building materials. Draper’s footprint remained as built and its exterior historic Georgian character remained unchanged. A publicity statement said: “While retaining the shell, a twenty-ﬁrst century learning environment was created on the interior, incorporating ‘green’ and ‘place responsive’ designs ensuring a resourceful use of energy, Water and building materials. Representing Berea College’s tradition of Being and Becoming, the renovation preserved the academic heritage of Draper and the architectural majesty of Danforth Chapel while incorporating state-of-the-art technologies to create a comfortable, flexible teaching and learning facility”.

During this renovation, stairwells were enclosed for ﬁre safety, an elevator was installed in the east wing, halls were widened, new walls of steel and thin sheet rock were built, floors of recycled maple parquet were laid and the Original terrazzo halls were saved and reﬁnished; linoleum was installed in some classrooms, carpet in others, and new insulated sash windows and frames replaced the original steel framed windows. The building’s spaces were subdivided in new ways for traditional uses and were rewired and replumbed as needed. Departmental offices were constructed in suites or along hallways according to academic discipline so as to be close to designated classrooms. Each department had a small lockable formal space to be used for seminars or other departmental purposes. Restrooms were relocated and used recycled water. All rooms were equipped with thermostats, lighting and ventilation that would respond to the building and individual class needs. Much of the original student made Woodcraft furniture was saved and reﬁnished. Display cases and recycle bins were constructed along the hallways. Student lounges and study areas were part of each ﬂoor and all public spaces were equipped with new furniture, computer ports and audio-visual capabilities. The Georgian entrance vestibule was restored and opened onto a newly created central atrium that rose cutting through the second and third floors to a glass roof. This glass atrium provides light and air to an open and illuminated building core that had once been dark and enclosed. Central environmental controls placed at the atrium indicate the state of the building’s climate. Draper has become a living breathing structure that is hoped will serve as well and as long as the building did without renovation for its ﬁrst sixty years. The American Institute of Architects said that the renovated Draper building incorporated “technology and green building concepts carefully and successfully, allowing the extended life of an architectural treasure”. Their “Special Award for Historic Restoration/Adaptive Reuse: Draper Hall, Berea College” was received in November, 2004 (letter from President Larry Shinn). At publication, the interior contemporary surfaces are beginning to show wear and the green building technology is still not fully operational. The marble and slate from the original building were sold at public auction as was much of the interior architectural trim. 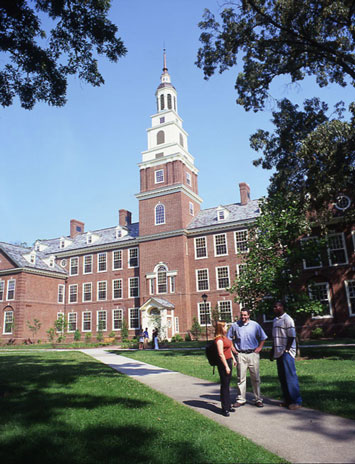