Clara Chassell Cooper (1893 – 1993), an author of several books and an esteemed psychologist, served as Head of the Department of Psychology from 1951 to 1961 (Berea Citizen).  She is perhaps best known in Berea College history as the originator and librettist of the Children of God Oratorio.

Clara Chassell (and her twin sister, Laura), were born in Sundance, Wyoming in 1893 to Reverend Olin B. Chassell and Ella Buckingham Chassell.  Her father, a Methodist minister, built the first “country church” in the state of Wyoming.  She graduated from Cornell College with a B.A., earned a Master of Didactics from Iowa State Teachers College and an M.A. in psychology at Northwestern University, and was finally awarded a Ph.D. in educational psychology by Columbia University in 1920 (Berea Citizen).

From 1917 to 1922, Chassell served as the school psychologist for the Horace Mann School and an instructor and research assistant in experimental education at Teachers College, Columbia University.  Dr. Andrew Leitch, Head of the Department of Psychology at Bethany College in West Virginia, praised Chassell’s work at Columbia.  “I knew Dr. Clara Chassell Cooper when she was a member of the staff of Teachers’ College, Columbia University.  Her professional work as psychologist, research worker, and teacher were of the highest order… Those who read her writings and hear her lectures cannot fail to be impressed by the scholarly nature of her work.” 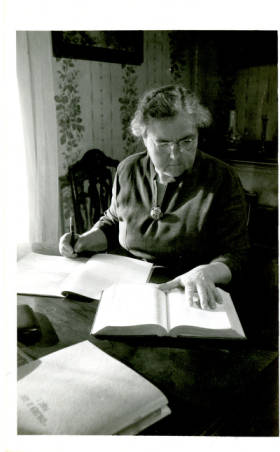 During World War II Chassell served as senior accountant clerk for the Extension Service office at the University of Maryland.  From 1946 to 1948 Chassell served as assistant professor of psychology at Wilson College, Pennsylvania.  In 1948 she was employed by Lebanon Valley College, where she became the Dean of Women and head of the Psychology Department.  In 1951 she moved to Berea, where she became head of the Psychology Department.  She served for ten years until she reached Berea’s mandatory retirement age in 1961.  At the age of 68, she was not yet ready to retire from work altogether, and she served as a visiting professor to schools in West Virginia, Taiwan, and Alabama.  In 1968, she officially retired at the age of 75.

While attending Columbia University, Clara met Homer E. Cooper, and by 1922 they were married.  They had two sons, Homer C. Cooper and Olin C. Cooper.  She outlived both her husband and son Olin.  Homer died three weeks from the day of their thirtieth wedding anniversary in 1952, and Olin died while riding his bicycle in a car accident at the age of 59.  Clara and her twin sister Laura both lived well into their 80s, and they stayed in touch with each other through frequent visits and letters.  The day before their 85th birthday, the League of Women Voters honored them both by presenting them with orchids at a meeting.  Cooper stayed connected with her friends and family by mailing out annual newsletters about her activities.  She died on December 23, 1993 in Athens, Georgia, three months before her 100th birthday (In Memoriam).

Cooper wrote The Relation between Morality and Intellect (1935) and A Comparative Study of Delinquents and Non-Delinquents (1960).  Both books were highly esteemed.  James B. Miner, head of the Department of Psychology at the University of Kentucky, praised her book The Relation between Mortality and Intellect, saying, “No one can understand the significance of the scientific work bearing upon the relation of intellect to morality who is not familiar with this synthetic summary by Dr. Clara F. Chassell.”

Cooper also wrote many articles for professional journals.  She lectured on various topics in the fields of psychology, education, and character training.  She was well respected in the field of psychology as both a writer and lecturer.  During the summer of 1960 she delivered a paper at the 16th International Congress of Psychology in Bonn, Germany.  In addition to her scholarly work, she actively participated in social causes, including women’s suffrage and rights, Civil Rights, and Pacifism.  During the 1950s she adopted Berea’s Children of God Oratorio as her own personal project.  She conceived the idea for the oratorio in 1952 and acted as the librettist, compiling the biblical texts to be used in the musical piece.  In February 1 and 2, 1957, the Children of God Oratorio premiered in the Cincinnati Music Hall accompanied by the Cincinnati Symphony Orchestra.  It was performed again, in Berea, on May 15, 1957.

Cooper earned first place in the 1974 Kentucky State Poetry Contest with her book of verse, Recorded Insights: Poems of Yesterday for Tomorrow.  The book, published by Berea College, contained 175 of her poems, including her first poem, written at the age of seven, and one written at the age of 79.  The book was portrayed as a “social commentary” portraying the author’s outlook on life over a period of nearly eighty years.