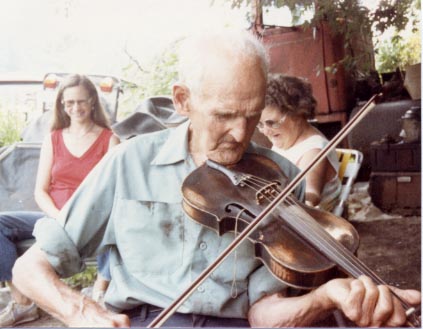 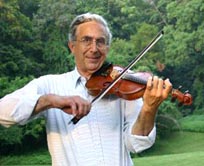 2008 Berea College Appalachian Sound Archives Fellow Alan Jabbour transcribed these selections from among the many fiddle tunes he auditioned during his research. They were chosen to feature interesting Kentucky tunes and variants, and to highlight key elements of performance style as described in Mr. Jabbour's Fellowship Activity Report.

Alan's transcriptions pay particular attention to unison notes, a culturally significant fiddling trait which appears often in Kentucky and throughout the Appalachian South. A "unison" features the playing of the same note simultaneously on two adjacent strings. Double stops and drone notes are also included where their presence seems to be an important component to the music. Some drone patterns are not fully reproduced as to avoid clutter and distraction to readers of the transcription.

In addition to the transcriptions you may play digital audio files of the original source recordings. Simply click on player below each transcription link to play the tune.

Andrew Jackson (PDF) - A reel or breakdown tune known in Ireland as "Over the Moor to Maggie" and as "Waynesboro" in West Virginia.

Kentucky Winder (PDF) - A relatively close kin to the tune "Big Scioty" played by the Hammons Family in West Virginia.

Blackberry Blossom (PDF) - Not the Arthur Smith tune of the same name. A very close kin to "Yew Piney Mountain," a distinctive tune from the repertory of central West Virginia fiddler French Carpenter.

Rooshian Rabbit (PDF) - Another "crooked tune" from Kentucky that features the solo style of "hanging notes." It begins with a great fanfare, then hangs on a high G before chasing off again.

Bumblebee in a Jug (PDF) - Kentucky fiddlers seem to favor styles that use either separate bow strokes for each note or pairs of notes on the same bow stroke. This is in contrast to the "longbow" patterns of their WVa. and Virginia counterparts.