The Castle and Palace: Home

The Castle and Palace 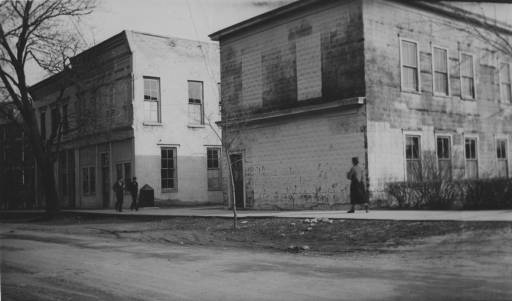 The Castle, a brick two-story storefront built with cast iron facade embellishments, opened its doors onto Richmond Pike. It was used by Clarkston's Hardware and was purchased for $6,000 from William Isaacs by the College in 1911 (PCM, April 5, 1911). Purchased at the  same time, the Palace (formerly Gents Furniture Store, Roberts "Palace Meat Market", or later Moyers Men's Clothing  Store)  was  a  two-story punched-tin metal-covered wooden frame building. This second building cost the College $3,000.  Both buildings were renovated; the  top  floors were used as residences for Vocational men and the ground floors provided classrooms for Vocational and Foundation School students. While discussing the campus plan with President Frost, the Olmsted Associates acknowledged  that these  "buildings would probably have to remain for some time  as class room  buildings",  but  their  appearance did not improve the College aesthetic ( Olmsted to Frost, May 29, 1914). Stairs were added to the outside of the Castle in 1937 (PCM, April 20, 1937; Berea Citizen, December 28, 1911, 3). The Palace was built in 1907 by Charley Preston (Berea Citizen, December 1911) and was torn down during the summer of 1937 (PCM, April 20, 1937; Berea Citizen, July 29, 1937, 1). However, the Castle was not torn down until 1968. This new site now made room for construction of the Hafer-Gibson   Nursing   Building  (1969).