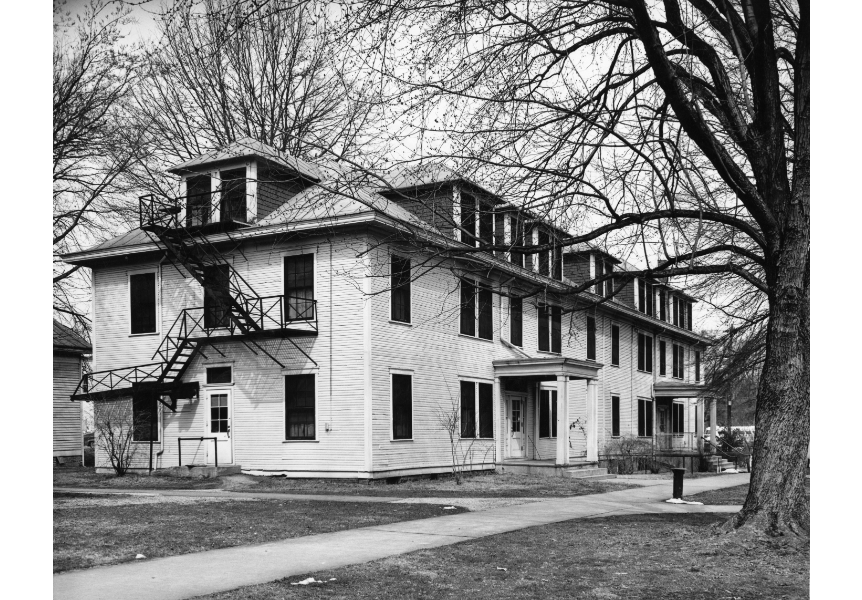 In 1912, almost twenty years into the Frost administration, a "popular movement [on Campus] was afoot for raising funds for a new dormitory" to be incorporated into the Academy Campus on the north side of Prospect Street. It would be built perpendicular to the road and parallel to another dormitory, both being "the size of Pear sons Hall" (letter from Frost to Olmsted, May 30, 1912). The Olmsted Associates gave President Frost suggestions for the location of these residence halls, saying that such a quadrangle
should be a companion to that planned for the women's campus on the south side of Big Hill Pike/Prospect Street. A few years later the Prudential Committee did vote "to construct with all speed, a building for Academy men, in the style of Putnam Hall". Construction using student labor started on September 20, 1915, and was completed in nine weeks on the north side of the
Academy Chapel and across Short Street from the Boone Tavern (Frost diary; PCM, September 20, 1915). Construction occurred just months after a German V-Boat sank the Lusitania, May 7, 1915, with the loss of 1,198 lives.

Hunting Hall was named for Rev. Bruce S. Hunting, first Principal of the Preparatory Department, 1876-98 (combined Academy, Vocational and Foundation schools) and teacher of Latin from 1879-98. It originally provided housing for over 50 Academy boys and opened for use at the beginning of the winter term, 1916. The younger boys were separated from the older ones on different floors (Berea Citizen, December 30, 1915, 2; BCABG, 5.39, box 3). When the building was built,.1 ,750 students were enrolled at
Berea. Additions "to make it conform with Putnam Hall" were constructed during 1919. The building was ready for use at the beginning of winter term 1920 (Frost diary, September, 1919). Like Putnam Hall, Hunting Hall had projecting eaves, was clapboarded and used double hung windows. External dormers used on the third floor indicated the placement and arrangement of interior rooms. In 1920, two porches, whose style was a scaled down and simplified single story version of Putnam Hall's porches, were added to
the east front of Hunting Hall at a cost of $500 (PCM, September 25, 1919; March 4, 1920). From 1942, the residence hall housed 84 women. In 1951, fire escapes were built. The building was razed during the summer of 1971 (Berea Alumnus, July-August, 1971, 8-9; Berea Citizen, June 17, 1971,7).