Constructed with a reinforced concrete frame, a surface skin of running bond red brick, adapted International Style, three-story, 16,000 square feet men's residence hall was a dedicated memorial to Berea College Trustee (1923-1937) Judge Robert Worth Bingham (1871-1937). It was a gift ($290,000) from Barry Bingham (also a College Trustee (1938-76) and President and editor-in chief of the Courier-Journal ) and the Courier-Journal and Louisville Times Foundation. Trustee Robert Worth Bingham was U. S. Ambassador to the Court of St. James, London, ex-Louisville Mayor, ex-lawyer, ex-judge and publisher of the Louisville Courier-Journal. The Board of Trustees voted to begin construction during the winter of 1959. Construction began in the spring (BTM, November 21, 1959). Post War Draper Row pre-fab housing that had been used by married students was razed to make room for the new construction site. 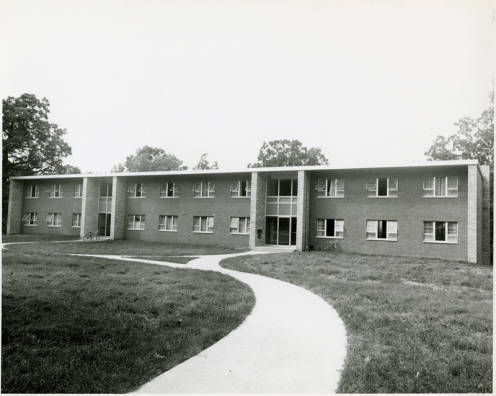 The ground floor had an intercom system, a kitchen, a sunken lounge, a recreation room, study rooms, a laundry and storage for trunks. Bingham Hall also had an apartment for the resident faculty family (Robert and Evelyn Dryman were the first to serve as resident faculty). The two-story east facade has a flat, cantilevered roof that is supported by limestone diaphragm walls at the ends and entrance surrounds. Aluminum trim and Chicago windows with reveals complete the front elevation. Sixty-two men moved into the hall at the beginning of classes, September 15, 1960. Each room was compact and well lighted, had two book racks, two desks, two twin beds and two closets with drawers (Berea Citizen, December 4, 1958; September 1, October 6, October 20 and October 27, 1960). At the dedication ceremony a plaque -dedicating the building to Robert W. Bingham was installed, and a "strong box" containing a dedication program, a letter of appreciation signed by all the residents and a dormitory constitution was laid in the wall "cornerstone" (Berea Citizen, October 13, 1960, 10). During the fall of 1960, John F. Kennedy was elected President of the United States.