by Leander A. Keim

Nationally renowned artist and muralist Bert Ruben Mullins (1901 – 1963) created an estimated three hundred and fifty to four hundred works in his lifetime, many of them still to be found today adorning public spaces and areas of prominence throughout Kentucky and the nation. Mullins married Eva Roark Ison and together they built a house in Rockcastle County, Kentucky, where they remained for life. Mullins and his wife Eva both attended Berea College for a time and Bert also studied under Richard Miller in Massachusetts for a summer. His skills at carpentry and lathe work supported him early on but by the mid-1930s painting became his sole means of support.

Mullins was born on April 29, 1901 in Hammond, Rockcastle County, Kentucky, to William and Eliza Swinford Mullins. Stories of his childhood generally reflect his fascination with creating drawings and pictures at a very early age, an indicator of what he would pursue as an adult. In early grade school he attended a one room, log schoolhouse in Hammond, Kentucky, near his birthplace. Records at Berea show Mullins entering Berea Foundation School in the autumn of 1916 in fifth grade. He returned for succeeding trimesters to complete seventh grade by the spring of 1918. He was a skilled craftsman known for his excellent lathe turnings and held a labor position at Berea as a Sloyd assistant. Sloyd refers to a handicraft philosophy that promoted social justice causes of that era.

Upon reaching adulthood he was expected by his family to pursue traditional avenues of employment, and did for a while, but he ultimately choose instead to pursue painting. On the twelfth of June 1925 he wed Eva Roark Ison from Annville, Jackson County, Kentucky. After their marriage they lived on Florida’s Gulf Coast for about one year before returning to Berea, Kentucky, where he was hired as a carpenter and maintenance man by Berea College. His considerable skills at carpentry and lathe work supported them during those early years, but Mullins was determined to engage with his love of painting and managed to divide his working year into two halves: one half of the year for painting and one half for doing carpentry. 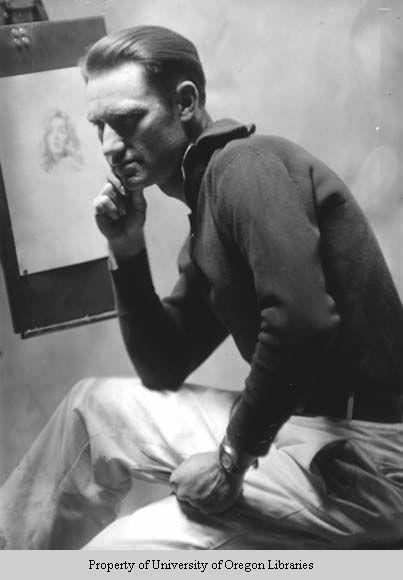 In 1936 he traveled to Provincetown, Massachusetts, to study painting under the gifted eye of American Impressionist painter Richard Miller who taught there at the time. After three months in training, Mullins moved back to the mountains of Kentucky where he renounced his commercial work as a carpenter to take up painting full-time. He shared an art studio with fellow artist Frank Long on Berea’s Main Street for a period. Mullin’s painting style was original and did not conform to any of the widely recognized styles such as Impressionism, Art Nouveau, Expressionism and so on. He was commissioned by the Works Progress Administration in 1938 under President Roosevelt’s New Deal to paint murals for public spaces such as U.S. Postal Service buildings and courthouses many of which still retain Mullin’s paintings. One of his earliest such works, a four by twelve foot piece titled “Agriculture and Stock Raising in Kentucky,” was created for the Campbellsville, Kentucky Post Office.

He often was commissioned to paint portraits notable people. One of the more unusual requests he received was to paint a portrait of businessman and philanthropist Colonel Edward R. Bradley’s horse, Bimelech. Bradley dealt in Thoroughbred racehorses and Bimelech was one of his notable acquisitions. Mullins spent two months accomplishing the task, intentionally unhurried, to create an exemplary piece of work.

Among his notable achievements is a large mural located in the music venue, Radio City, which is located in Rockefeller Center, New York. The mural depicts Mullin's life in Kentucky mountain country. The Hagerstown, Maryland Post Office was the recipient of another one of Mullin's works in the form of a large mural. He was also asked to create a large mural for the Renfro Valley Studio, a music venue located in Rockcastle County, Kentucky, containing as many as 200 hundred characters. Roland Roberts, Superintendent of the Jessamine County High School, requested one of the last works that Mullins would create. It was titled “The Evolution of Education” and was placed in that school.

Mullins spent years collecting native stone, and wood, and slowly he and Eva pieced together a magnificent house near Disputanta, Kentucky. They did not complete the house by the time of Mullins death but lived in it for some years prior while slowly continuing to work on it. It contained a studio in which Mullins worked on his painting projects. They named the house Wood Betony, and it drew the attention of architects and others for its unusual style. It sported no less than fourteen gables, and the exterior was constructed mostly of stone from the surrounding area. Eva’s skill in many artistic and domestic tasks contributed much to the house in the way of horticulture, rugs, draperies and bed coverings.

Mullins was a member of the American Federation of Artists, the Kentucky Guild of Artists & Craftsmen and was listed in the 1956 edition of Marquis “Who’s Who,” a national biographic reference file. He was also a member of the Filson Club, a historical society within the state of Kentucky. Mullins suffered from a lifelong heart condition, and in February of 1963 he passed away. His wife Eva retired from teaching in the Rockcastle County School system in 1972 and dedicated herself to completing Wood Betony. From September 21 to October 15 of 1964 Rogers Memorial Art Gallery on Berea College Campus held a Bert Mullins exhibit displaying a large variety of the artist’s work.