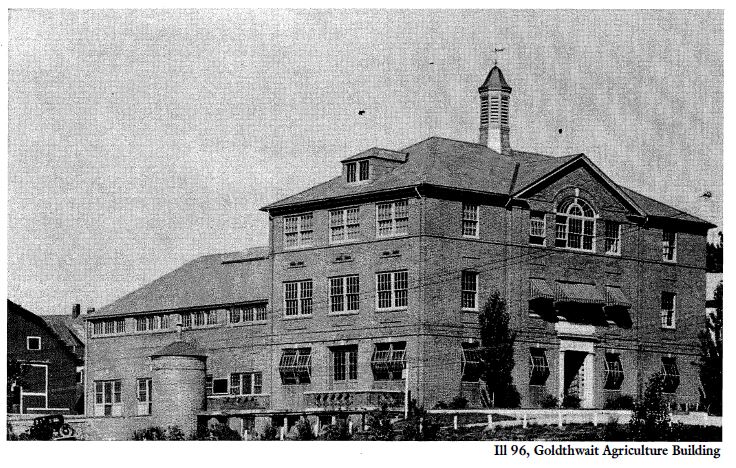 In 1898, the Board of Trustees voted to institute a course of instruction in Agriculture that was housed in the newly constructed Science/Liberal Arts Building.However, it was not until 1927, that the Board decided to build a separate building for the Agriculture Department.This building was a gift from Berea College Trustee (1929?) Dr. and Mrs. Joel Goldthwait and their daughter. He was a Boston orthopedic surgeon who, as a College Trustee, was interested in body mechanics, improved student health and posture. This new building was a designated memorial to their son Vincent, an agricultural student at Cornell University, who had drowned in 1922 attempting to save friends in Lake Champlain after their motor launch had exploded. "As he was planning his life work and service" Vincent was interested "in making agricultural activities worthwhile through better knowledge, lessening the drudgery and stimulating the interest in this absolutely necessary work" (Goldthwait letter to W: J. Hutchins, June 3, 1928). Goldthwait, William Jesse Baird, Director of the Department of Agriculture, and President Hutchins spoke at the building's dedicatory services. President Hutchins dedicated the building to Vincent "who gave his life to save others and to the instruction of young men and women in the theory and practice of agriculture" (Berea Citizen, October 15, 1928, 1).

This colonial inspired red brick Flemish bond, three-story building was placed on the site of the former farm office, mill and corncribs. At the back was a livestock pavilion that could seat about 500 and during the early years served as a site for county fairs. The building was equipped with a meat processing laboratory on the north which was ceramic tile lined, had good lighting, air and ventilation. A dry salt room and a smoke house were designed and built on the north. On the south side was a dairy laboratory for pasteurization, and for butter and cheese making. The second floor had two large classrooms for agronomy, horticulture and animal husbandry; and the third floor had three classrooms and offices for faculty (Berea Citizen, October 11, 1938, 1; and October 18, 1938, 1). The symmetrical facade is dressed with a modified Palladian window which projects into the brick pilaster-supported broken pediment. In turn these pilasters rise from a wide brick stringcourse. The central entrance way is decorated with Doric limestone pilasters and an engraved entablature. Crowning the building is a small central ventilated cupola with weather vane.

The main classroom building was renovated during 1983 by the architectural firm of Johnson and Romanowitz, Lexington, KY. Two new wings were added to the west side of the building to provide larger laboratories. An animal physiology lab and a new interior staircase were also included in the renovation. This 3,600 square foot addition and renovation cost $1.6 million. The Pavilion was converted to a multi-purpose room for livestock examination and movie room. Nutrition, agronomy and physiology labs were placed on the first floor; faculty offices, a study lounge and classrooms comprised the second floor mezzanine; a horticulture lab and a study room were located on the third floor. The College served as its own contractor for this renovation. At the time of the rededication Berea had over 700 living agriculture graduates (Berea Citizen, August 5, 1982, 7; October 20, 1983, 1; October 27, 1983, 7). 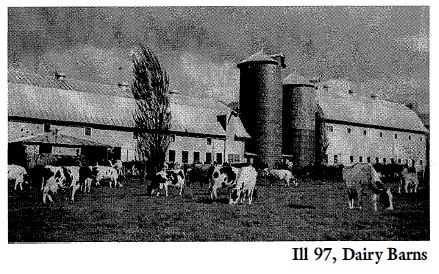 A dairy herd was begun in 1896 and was housed in a dairy barn built perpendicular to Walnut Meadow Pike in 1900. After a fire destroyed the structure a new and better barn (capacity for thirty-six cows) was built parallel to the Pike during July, 1911. A barn warming took place on Saturday, October 21 (PCM, June 24, October 19, 1911). To make the barn safer from fires, the structure was expanded with brick walls (PCM, May 30, 1918). The College's dairy herd was improved by the purchase of purebred Holstein cows and a mature breeding bull acquired in Wisconsin in 1918. With this better herd and the continued need for financial stability of this College industry, a new barn and a cheese factory were authorized to be fully operational by 1918 (BTM, March 5, 1918; PCM, June 21 and July 12, 1918). The dairy sold 33,000 gallons of milk to the Boarding Hall in 1923 (PAR, 1923). By 1925, the herd was virtually purebred; in 1928 the herd was placed on the Herd Improvement Registry; in 1936, the dairy was the best milk producing herd in the Commonwealth of Kentucky; and in 1938 Berea College "had the highest producing herd on twice-a-day milking in the United States (PAR, June 1938). However, to increase butter fat content, a Guernsey herd was purchased in 1932. In 1947, the Agricultural Department entered a few of the herd-cows in the Kentucky State Fair where the Grand Champion Guernsey in the state was awarded to a Berea College cow (BTM, November 21, 1947). A brick shed and a storage building were built in 1949, and because of the continually increasing size of the dairy herd, a series of pole-type loafing barns were built during 1957. A new milking parlor was constructed in 1958. Berea College, however, went out of the milk producing business during August 1970, when the dairy herd was sold (Berea Citizen, September 10, 1970). John C. Campbell Folk School bought the most important cows of that herd.

A new churn and McCormick Deering milking system were installed in the dairy barn during the fall of 1932 (Berea Citizen, November 10, 1932, 1). But the Creamery was moved from the Goldthwait Building to a new building in 1940, and was again expanded in 1948. D. R. Durbin supervised the construction of this new facility. The running bond brick building had a single floor and nineteen-rooms with a total of 6,400 square feet of space. Cellarius' design was symmetrical with two projecting brick quoined and gabled entrances; one entrance was glassed-in, the other had an arched fan-lit doorway. Every window was supported by a flat arch. Each room had its own designated process: churning, ice cream production, weighing and grading, pasteurizing, a laboratory and a large refrigeration room (Berea Citizen, September 14, 1939, 4; October 31,1940; PCM, May 11, and November 7, 1939; BTM, March 17, 1939). Professor H. Monier, Agriculture Department, said it was one of the most modern facilities in the state (Berea Citizen, November 4, 1940, 1). Using cream from the Dairy and milk: and cream purchased from about 50 dairy farmers in the area, butter, ice cream and cheese were produced for the College and for public sale. Ice cream machinery was purchased in 1936, for the Goldthwait Agricultural Building and the production of ice cream was expanded in 1940, when the process was moved to the new Creamery building (PCM, June 6, 1936). In 1938, 132,000 pounds of butter and 17,000 pounds of cottage cheese were produced (PAR, June 1938). In the early days milk was sold locally and delivered by horse drawn closed wagons. The horses were shod with rubber shoes and made a blob, blob sound as they came through Berea neighborhoods (Virginia Ferrill Piland). As an agriculture major whose labor hours were in the Agriculture program in the 1930s, the author's father often talked about the milk products produced and sold by the College.

By 1937, this adjunct "plant" to the College agricultural program covered eleven acres, had four buildings, six brooder houses, and an incubator house. In 1937, the poultry farm averaged 131 eggs a year from each hen. Bulk eggs were sold to the Boarding Hall, College Hospital and the College Store (PAR, June 1937; Berea Alumnus, 7:7, 1937, 205-209+). In 1958, 100 acres and six new buildings provided the capacity for 7,000 baby chicks, over a thousand laying hens and a flock of turkeys. The Poultry industry was shut down in the 1980s and the barns have been used for College surplus storage and as a home for the College Utilities.

By the mid-1930s, the College farm was producing 70-80 bushels of corn an acre; but by 1958, 100 bushels per acre could be expected; a swine herd was begun in 1920, a flock of sheep in 1922, and a beef cattle herd in 1929. By 1958, the livestock farm located on the north side of the College had grown to nearly 700 acres, had a 200 ton silo, pig parlors (these were torn down to make room for the new Berea Community School in May, 1969), feeding barns, storage buildings and implement sheds. Most of the farm properties extended north and south of the ridge. Greenhouses were built below the Cannery during 1958 and were used to provide production space for vegetables, flowers and ornamental cuttings to improve the appearance of the campus (Berea Alumnus, April 1958, 5-12). These greenhouses were refurbished during the early months of 1975. In 1983, a mix mill and hog feeding floor, and in 1995, a hog farrowing house were built at the north farm. By the latter part of the twentieth century, the Department of Agriculture was graduating students mostly in Agriculture Business, not pure agriculture as had been the case in the early part of the century.