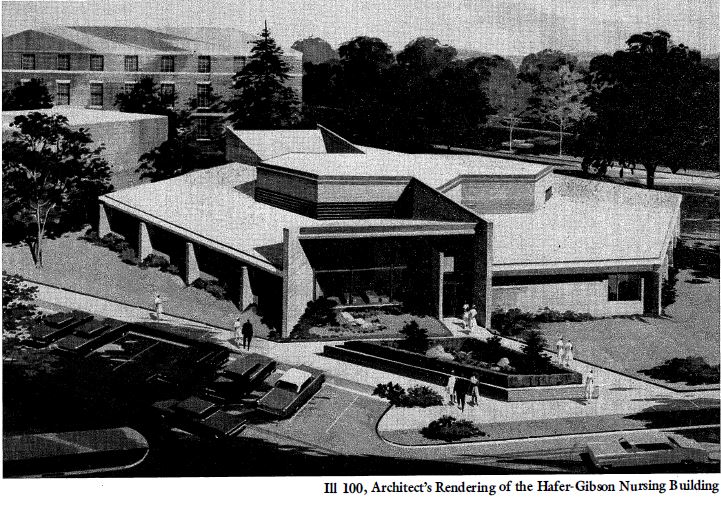 The Prudential Committee began discussing the construction of a nursing building during the spring of 1963, but actual construction did not begin on the Hafer- Gibson Nursing Building until August, 1968. This 17,000 square feet building's cornerstone was laid on April 24, 1969 [Dr. Mildred Montag, Columbia University was the keynote speaker], and was dedicated that fall, November 20, 1969 [Margaret McLaughlin, Assistant US Surgeon General, spoke at the dedication] (Berea Citizen, November 20 and 26,1969). The College received a grant from the US Department of Health, Education and Welfare for$286,448 and the Kresge Foundation for $35,000, to assist in the construction of the building that began in August, 1968. Built of red brick in a running bond pattern on a reinforced concrete frame, the Hafer- Gibson Nursing Building with its diaphragm walls was built on the land occupied by the former Foundation School classroom buildings, the Castle and the Palace. Steep "shed roofs" with walls of glass were used at both building entrances.

The building was designed with a demonstration classroom seating seventy-two, three seminar rooms, three classrooms, flexible laboratory teaching spaces and a closed circuit television system. Louise Gibson, AVS, assisted in planning the communication links and multimedia installations throughout the building. The classrooms, like wheel spokes, radiate from central classroom theaters and are illuminated with indirect light from clerestory windows (Berea Citizen April 24, 1969; August 14, 1969;
November 20,1969). During the summer when this building was being completed, American astronaut, Buzz Aldrin, took the first walk on the moon and in the fall violent anti-Vietnam war demonstrations erupted across America. With the completion of this new structure, all the nursing classes were centralized; and with centralized classes and administration, the Nursing Program could now be expanded. Accordingly, Berea's nursing program was "accredited by the National League of Nursing and approved by the Kentucky Board of Nursing Education and Nurse Registration" (Berea Citizen, November 22, 1969).

In 1958, to honor Mr. and Mrs. Herbert Faber, the Appalachian Fund awarded the nursing program a million dollar endowment. With these funds, other moneys, a new curriculum and hospital affiliations, the College was able to award the first Liberal Arts degree in Nursing, a BS, during Commencement exercises, June 1960 (BTM, April 22, 1960).

This hexagonal shaped building was "named for two pioneer nursing educators of Berea." Lorena Hafer (Mrs. Charles D. Lewis), a 1911 Berea graduate, was assistant registrar until 1917. She received her nurse's training at Johns Hopkins University and taught nursing at Berea College from 1923 until 1934. She then became Superintendent of the recently constructed Berea College Grew Hospital (1918) until her retirement in 1954. Florence Gibson came from Vermont to the Berea College Hospital in 1924, where she served as Assistant Superintendent until 1939. From 1942 until 1956 she was Superintendent of Nursing Services. Under President W J Hutchins, a nurses' training department (School of Nursing) became a separate educational entity of the College in 1924, and offered courses "prescribed by the Kentucky State Board of Examiners." The Nursing Program and College Hospital were affiliated with the Louisville Hospital (1924), the Cincinnati General Hospital (1926) and the Veteran's Administration Hospital in Lexington (1946-53). These affiliations provided the Berea nursing student with broad practical hands-on experience (Peck and Pride, Nurses in Time, 33-36). 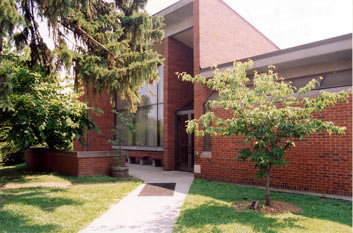