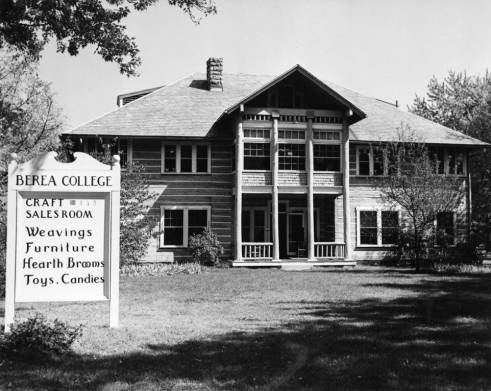 This sixty-eight by forty feet log structure, ready for use in September 1916, and dedicated on May 2, 1917, "was erected for promoting the revival of the colonial arts in the Southern Mountains" and as a "gift to the mountain women who weave to educate their families." It was designed in a Palladian symmetrical plantation style, with classical portico, and was equipped with steam heat and electricity. Tulip poplar logs, prepared during the summer of 1915 (PCM, May 26, 1915), were chosen as the building material because the wood and building process "represented" Appalachian mountain traditional crafts. Great logs were used as columns to support balconies and pediment in both front and back:. The back balcony was screened and had an external staircase to the upstairs apartment; the front was enclosed with double hung windows. Interiors were log and tongue and groove paneled with exposed-beam ceilings. Most windows were double hung, but those on the later enclosed upstairs porches were casement windows.
The structure, to be built on Center Street, was to have originally faced the southern mountains; however, the Log House, as it was ultimately called, was actually built to face the convergence of the newly rerouted and constructed Center and Estill Streets, the later "Dixie Highway". Wooden shingles were used on the roof and as siding on some sections of this Appalachian building.

Miss Josephine A. Robinson, Principal of the Ladies' Department (1897-1901) and Dean of Women (1901-07), had been put in charge of weaving, 1898-1902. In 1902, she reported to the Board of Trustees: "the foundation is now laid for the instruction of artistic weaving of any sort desired ... " (Board of Trustees' Report Folder, 1902). As proof of this ability, a coverlet woven by Mrs. Mary Anderson won a bronze medal at the Art Nouveau Paris Exposition, 1900. Hettie Wright Graham (1902-1903) and later, Jennie Lester Hill (1903-1911) followed Robinson as head of Fireside Industries. At the Louisiana Purchase Centennial Exposition in St. Louis, 1904, as in Paris in 1900, Berea College hand weaving again won a bronze medal. Anna M. Ernberg, a Swede, who had taught at Pratt Institute and Teacher's College, Columbia University, NY (1908-10), was hired by President Frost in 1911 to be Superintendent of the Fireside Industries and especially to teach traditional weaving. She and her sons first lived in Clover Bottom Cottage on Jackson Street which was the first headquarters of Fireside Weaving; they then moved to the top floor apartment of the Log House (PCM, July 23, 1916) where she was charged $10 monthly rent. The lower floor of the Log House became the display and salesroom for items produced by the Berea Craft Industries. The author's grandmother was enrolled in the Normal during the second decade of the century and learned weaving from Anna Ernberg while on campus. When her husband became the business manager for the Pleasant Hill Academy, TN, she created a home weaving industry and employed at one time fifteen women. It is likely that numerous women, upon leaving Berea, did the same thing.

Fireside Industries moved around in the early years from Clover Bottom Cottage (1902), to the basement of Putnam H all (1913), and to the Rustic Cottage (1915) before finally moving to the Log House (1917). Basket making, chair making and "the household arts" were taught and produced in the Clover Bottom Cottage that later became a Log House annex. As stated earlier in this text, the poplar logs for this structure had previously been used in the construction of a Baptist Church located on the county· line at Clover Bottom, near Jackson County (BCABG, box 3.5). At Mrs. Ernberg's retirement in 1936, she was credited with reviving "colonial home
arts" in the Southern Mountain area and "helping' the foreign mission cause, as missionaries from China, Africa and Micronesia were among her students" (PAR, June 1936). Her impact was both regional and international. While Mrs. Ernberg was in charge of the Fireside Industry, she became a "middleman" for mountain women who provided products which Fireside sold; in 1924, over one hundred fifty mountain homes benefited from these "fireside industry" sales (PAR, 1924, 19). Mothers helped pay for their son's or daughter's Berea education by these sales.

Additional space was added to the Log House for Mrs. Ernberg's office and her loom (PCM, October 18, 1929) and in 1931, the second floor porches were enclosed with casement windows to become show rooms for display of Woodcraft Industry furniture. Each of four new rooms on the second floor was named for a tree: Sycamore, Cherry, Yellow Pine and Maple and were furnished in a suite of furniture made from a single wood (Berea Citizen, August 13, 1931, 1). For the College's Centennial year, an ashlar fieldstone sales room (eighteen by thirty-six feet in size) with a new entrance opening onto Estill Street was added to the Log House (Berea Citizen, April 21, 1955, 1). The building was restored and redecorated during the spring of 1975 and again in 1999. New walks, floors, and porch posts were constructed and the whole was painted to match the weathered wood of earlier years (Berea Citizen, May 8, 1975).

Mrs. Ernberg's top floor residence of the Log House became a setting to display the Ridgeway furniture collection as well as forty pieces of the Wallace Nutting furniture. These collections had been given to the College in 1930, 1935 and 1946 (PCM, March 18, 1930). With the financial assistance of the Drexel Furniture Company these rooms were made possible and opened during the spring of 1958 (BTM, Aprilll , 1958). In turn, Drexel bought from Berea the original Nutting furniture designs and the exclusive right to use Wallace Nutting's name on their industrial produced furniture. Wallace Nutting had trained as a minister but left the ministry to devote his full time to writing, producing hand-made early American furniture reproductions and producing photographs for Century Magazine and Women's Home Journal. He was a friend of William J. Hutchins and served as a consultant to the College's Woodcraft Industry until his death in 1941 (Berea Citizen, April 12, 1984).

All wiring and plumbing was upgraded, a new air conditioning system was installed; floors were refinished and exhibition sales rooms were improved. The extremely valuable Ridgeway Furniture collection and that of Wallace Nutting were dispersed around campus. Some went to be used at the President's Home and others to Boone Tavern. Though valuable, it was decided to put the furniture to use and make the collections part of the public domain. 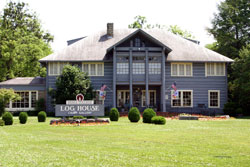