Edwards Building / Men's Industrial
Building, 1902-1903
Trades Building
Bruce building
Foundation School
Thomas A. Edwards Building, renamed
February, 1959
Architect: Unrecorded, but letters imply he
came from Boston, MA
Construction: Supervised by Josiah Burdette
Cornerstone laid: October 18, 1902
Dedication: December 4, 1903
Cost: c. $35,000
The Board of Trustees voted to establish vocational courses during the summer of 1898 and later voted iu 1901 to build a building to house those classes (BTM, June 23,1898, June 6, 1901). Superintendent Charles A. King went to Boston to
get the finished plans from an architect who remains unknown (Berea Citizen, August, 1902). However, Cleveland Cady laid out the site on the north end of the College Green/Public Square and over forty male students worked during
October, 1902, to prepare the foundations for the Industrial Building. The cornerstone, into which the following words were carved "Industry, Skill, Brotherhood, Religion," was laid by Julian Ralph on October 18, 1902. Because thousands of bricks would be needed for this project and other later institutional projects, a Brick Yard had been built in 1901 close to Rucker's Knob, what is now called Dead Horse Knob (BTM, March 27,1901). The Industrial Buildings were a Vocational student learning and labor project that was to serve the industrial education program of Berea Foundation School male students. As a project it was similar in concept to buildings built at Tuskegee and Hampton Institutes. The largest front building was to be thirty-six by one hundred thirty-two feet; a space of twenty feet separated it from two soon-to-be-built other buildings thirty-six by sixty four feet; and still a fourth building (Trades) thirty-six by one hundred thirty-two feet was to be built twenty feet from the two middle buildings. Students and industries moved into the first  section that was completed during the winter term, 1903. The constructed north half of the middle building (1903) was later named the Bruce Building to honor George Bruce. In time it was doubled in size to become the College Press. These later to be- built three-story (they were originally to be only two stories) and two-story brick buildings were to be used for such academic classes and school industries as: tailoring, laundry, wagon shop (wheelwright), blacksmith, small machine repair, carpentry and cabinetry, and printing and drawing. Virtually all the funds for the construction of the first building (Edwards) came from donors in New York, Pennsylvania and Massachusetts (BTM, June 4, 1903). A part of William G. Frost's acceptance to be President of Berea College in 1893 was his requirement that Berea secure job opportunities to assist students to be self-supporting. He provided the leadership and was instrumental in developing Berea's unique Labor Program. Frost  stressed the need for productive industries so that students, both men and women, would get practical training and in turn receive some income to support their education. Consequently various labor positions in College Industries became part of the fiber of every Berea student: e.g. a printing press, farming, Fireside Industries, woodworking, brick-making, a balcery and later a candy kitchen. Many students received their training through industrial classes taught in Edwards but just as many learned on the job. 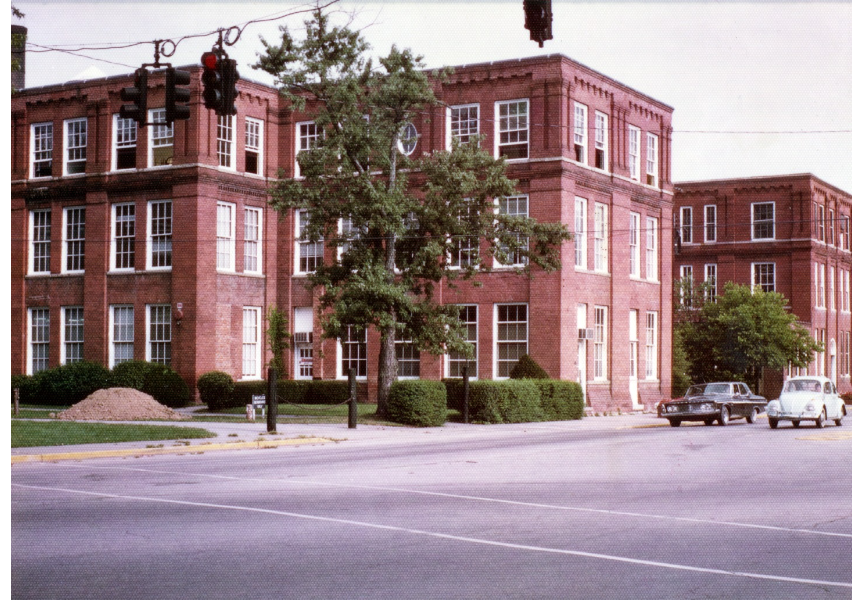 A Dean of Labor was appointed in 1914, but it was not until 1917 that the Board of Trustees passed a requirement that all students work for the College at least ten hours a week. The common bond red brick wood framed Industrial Building was a five part symmetrical block with two sections projecting a bay's width toward the College Green. A north Italian Lombard Tuscan pilaster and modified dentil pattern was used to relieve and corrugate the building's structure at its third floor and cornice; windows were supported by flat brick arches and limestone lintels; the central entrance was recessed and incorporated a large central doorway with patterned brick archivaults. A limestone keystone and the two side arched windows were treated in a similar manner as the doorway. Wooden sash windows were used throughout the building and projecting thickened pilasters supported the corners of the building. The back facade is an unbroken plane with asymmetrical doors and windows, and because the building's end also runs parallel to Walnut Meadow Pilce/Main Street, a facade with two doors opens onto the sidewalk. Looking closely at the building, various parts are not plumb. It was truly a student-learning project. This Industrial Building was constructed at the same time the French architect-engineer, Auguste Perret, was designing utilitarian buildings in Paris, France, built entirely from a cage of reinforced concrete, a medium that would become "the building process" of the twentieth century, but at that time not yet used in the United States and especially not on the Berea Campus. In Kitty Hawk, NC, the Wright brothers made the first successful manned flight of about 850 feet and Henry Ford founded the Ford Motor Company. In later years, Berea would be concerned about student cars and parking; but in 1903, Frost was concerned about horses, buggies, the L & N railroad and how to get guests and students to campus.For the cornerstone laying ceremony on October 18 1902 Robert Todd Lincoln (Abraham  lincoln's , ,surviving son) provided a Pullman car for distinguished guests who wished to attend the ceremony. The train left Cincinnati at 8:05 am on October 17, 1902. Julian Ralph gave the keynote address at the chapel services the following day. A banquet set for one hundred forty guests was served in the Agriculture room and guests were housed on the third floor of the Industrial Building during the dedication weekend (Berea Citizen, December 3, 1903, 5; BCABG, 5.39). When dedicated (December 4-5,1903) the building was not fully furnished and thus was used by different departments than those for which it was originally planned. The ground floor housed a Wagon Shop and a Mason Shop, and above was a Sloyd Shop and Tailor Shop. 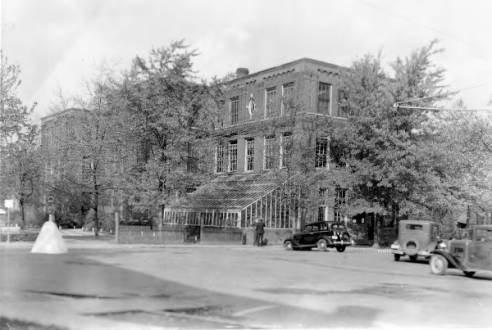 The third floor had 25 rooms that ultimately housed two to four men per room. The first Dean of the Foundation School (1904-26), Thomas A. Edwards, came to Berea from Ohio and upon retirement from the College became the first principal of the newly constructed Berea High School ("Fruit Jar High"), 1926-28. To honor this man during the spring of 1959, the Industrial Building was renamed the Thomas Edwards Building (Berea Citizen, February 19, 1959, 1; BTM, April 10, 1959). Though technically part of the Vocational Men's campus, the Industrial Building also provided residences for men of the Foundation School, the campus Post Office and a greenhouse (as seen in the illustration). Moved from the corner of Boone Tavern in 1929, the Post Office was relocated at the SE corner of the Industrial Building until it again was moved to its home in the basement of Fairchild Hall in 1962. The Foundation School Library was located in the west end on the first floor. A greenhouse on the SE corner designed by Moninger Company, Chicago, the gift of a Mrs.Cabot, was built to the specifications of Moniger Company, Chicago (PCM, October 30, 1911). A new greenhouse given by the Charles E. Kettering Foundation replaced the Cobot gift; and in 1954 the  Ketterings again gave the College a new greenhouse that this time was attached to the south end of the Hall Science Building (Berea Citizen, November 15, 1956, 1). All previous greenhouses were removed from Edwards Building. In the latter fourth of the twentieth century, Edwards Building has been a bit of a "catch-all" as various administrative departments were moved in and then out again. For example, the building served as the home of The Foundation School until its last graduation of seniors in May 1968; however, that fall it was used by the Berea Community High School until the newly constructed Community School was completed (Berea Citizen May 30, 1968; August 29, 1968). Edwards Building was renovated during the fall of 1972 and again during the summer and academic year of 1996-97. In 1972, the first floor became home to Testing, the Reading Lab, Development Office and Public Relations and the third floor continued to house male students. The Eden Hall Farm Foundation paid for this renovation. The Appalachian Center and Admissions Office were added in 1975. The top floor was again renovated in 1984, "to provide a small quiet residence option for men" (PAR, 1984). When the central core of Lincoln Hall collapsed in 2001, the President's Office shared spaces with the Development Office in the west wing. As of publication time, Admissions, College Relations/Development and male students are housed in the building.