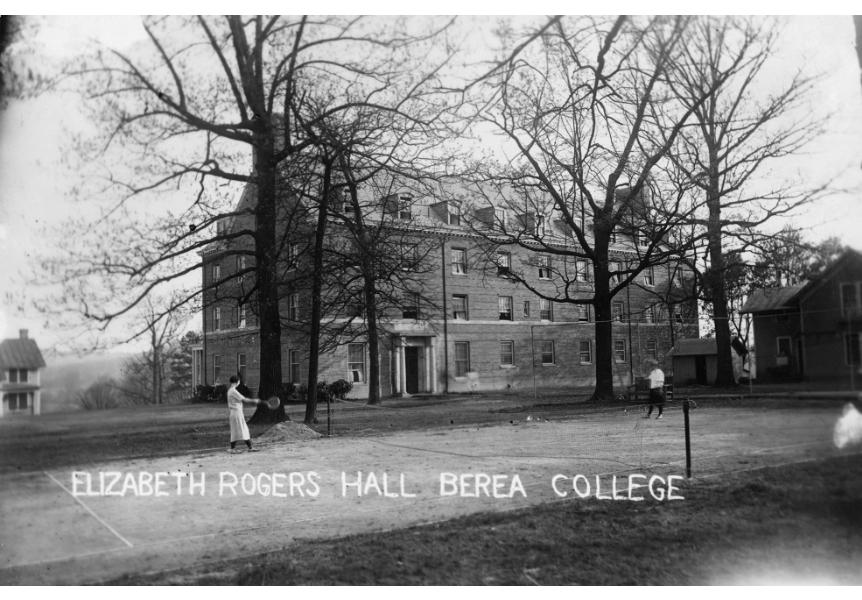 During March and April of 1924, the  Rogers home, an annex Model Home (the  Teacherage) and tennis courts were moved to make way for the construction of a new women's residence. The site of this residence hall was chosen to provide  the best view of the mountains on the south side. This common bond bride, fire-proof, green-slate roofed residence hall was built for women  of Berea's Normal (teacher training school). It was dedicated on  February  14,  1925, to the  memory of Elizabeth Rogers, wife of Berea's first principal, John A. R. Rogers and mother of College  Trustee, J. R. Rogers, Brooklyn, NY. Mrs. Rogers came to Berea with her husband in 1858. She died the same week as did President William J. Hutchins' father, the Rev. Robert Hutchins, pastor of Union Church (Frost diary, December 5, 1921). The Rogers' first home was a log cabin (long since gone) on "Elizabeth Branch", now known as Brushy Fork some five hundred yards south of the ridge. The Rogers' homestead  and stream  can  b seen from the upper south windows of the Residence . Hall. Jessie D. Munger of Plainfield, NJ, gave a bit more than a quarter of the funds to construct the building, and Anna L. Smith, Assistant to President William J. Hutchins, helped raise the rest. Ohio Supreme Court Judge, Florence M. Allen gave the principal address at the dedication and Mary E. Welsh eulogized Mrs. Rogers.

The fireproof building has a full basement, dressed limestone and soldier bond brick string  courses and flat arched windows. A brick patio extends from the student lounge and a porch supported by Doric piers covers part of this south patio. The entrance composed of rather severe Doric elements (limestone columns and entablature), is placed asymmetrically at the northeast end of the main facade. The plans called for a recreation room  m the basement. A three-story indented arch .decorates the east end of the building. Rooms for eighty-five women  and supervising  teachers  were  designed to be a bit larger than the rooms in James Hall that had been constructed six years earlier, 1917-18 (BTM, November  14,  1924; Berea  Citizen,  . February 12, 1925, l; BCABG, 5.39). A typical room was about thirteen feet by fifteen feet. Each floor had 5,340 square feet of space and housed twenty-eight Normal students. Trustee John Rogers gave the College a new oil painting of his  mother to hang in the lounge of the Residence Hall (this painting was cleaned and restored in 2002 and is    now housed in the Art Department' s Collections storage). When the Kentucky Legislature enacted a law related to teacher training credentials in 1931, Berea closed its Normal School (Berea  Citizen, May 28, 1931, 5). ER was used to house Lower Division or College Women students. However, when Cumberland and Curtis House were razed, ER served as a men's residence during the 1971 academic year; men had crossed Chestnut Street!

A fire escape was added in January 1933, new wiring in 1951, and a "face lift" and refurbishing took place during the summer of 1970 and again in 1979-80. The renovation was completed by students to "give them a greater sense of pride in the dormitories in which they lived". Window and door frames were replaced, new lighting and tile work was carried out, the plumbing was repaired and the whole was painted at a cost of $127,000 (BTM, August  16, 1951; Berea  Alumnus, November-December 1979, 7; PAR, 1979; Berea Citizen, September 20, 1979). ER is on the list of residence halls needing a complete modern renovation.