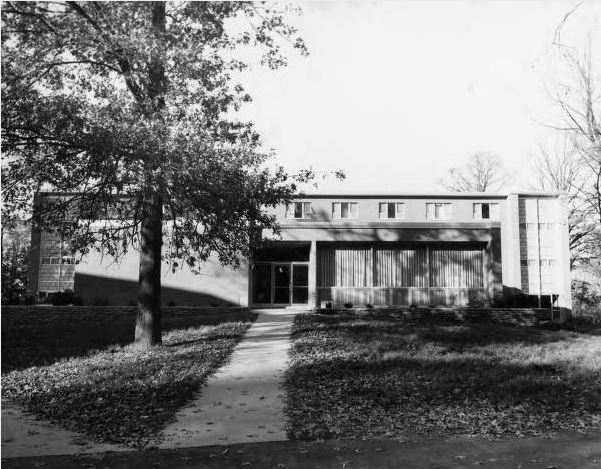 Industrialist-Philanthropist Charles A. Dana of New York and the Dana Corporation of Toledo, Ohio ($200,000), along with ninety friends, six foundations, and two corporations gave the funds to construct this four-floored men's residence hall. Mr. Dana, industrialist in the automotive field and who spoke at the dedication, had a hand in every aspect of the planning of the building (Berea
Citizen, May 25, 1961, 1). This flat roofed, mid-century, modified International Style modern structure of running bond red brick, steel and limestone was built on the site of the old Guest House that was razed during October 1959. Architect Louis' four-story design had 26,000 square feet of space for one hundred thirty men. A lounge, storage and mechanical rooms, a recreation room and an apartment for the resident faculty member were designed as the low geometric entrance unit to the four-story residence hall. Louis' symmetrical design, like that in his later design of Bingham Hall, incorporated a flat roof, diaphragm brick wall-surrounds at the entrances and stairwells (which were at the ends of the block), Chicago windows with reveals in a tightly stretched skin-like wall, brushed aluminum details at the roof line and windows, and a random ashlar limestone platform on which the entrance block
sat. The lounge incorporated tile and carpeted floors and floor to ceiling plate glass, concrete block brick and translucent glass block walls.

Professor Dr. George and Marie Noss, dorm parents, and 130 college men moved into the residence hall during the fall of 1960. When students arrived on campus in September, they were housed in Boone and Clover Cottages, and elsewhere before they could move into Dana (Berea Citizen, September 22, 1960, 1; BCAVF, 5.39). Each student room had two beds, two closets, two desks and chairs and two lamps (Berea Citizen, October 29, 1959, 1; November 24,1960 1 and December 1, 1960, 1). All other furnishings had to be provided by the student. The cornerstone was laid during Homecoming, November 26, 1960. It contained a strongbox into which numerous items were placed; an important item for the men of the hall was a deflated football that had been used to win the intramural football championship. The building was dedicated on May 23, 1961 The late 1950s and early 1960s were a period of
traumatic social, political and civil unrest in America. President Kennedy mobilized the National Guard and Federal Officers to protect students and integrate classes in Mississippi and Georgia; and the town and gown relations in Berea were tense. But on the positive side of social change, in the year when Dana was dedicated, President John F. Kennedy established the Peace  Corps and Alan Shepard, Jr., made the first American manned space voyage. 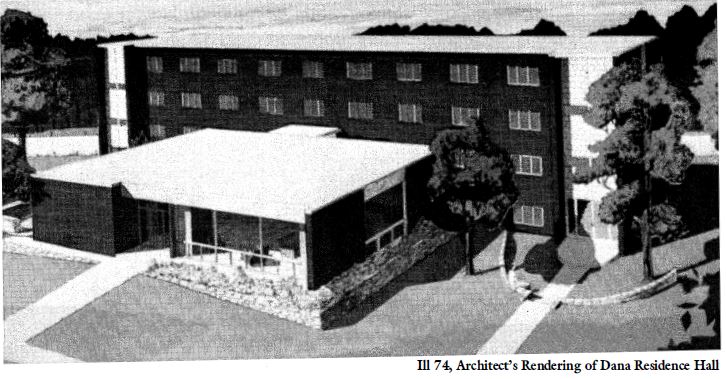