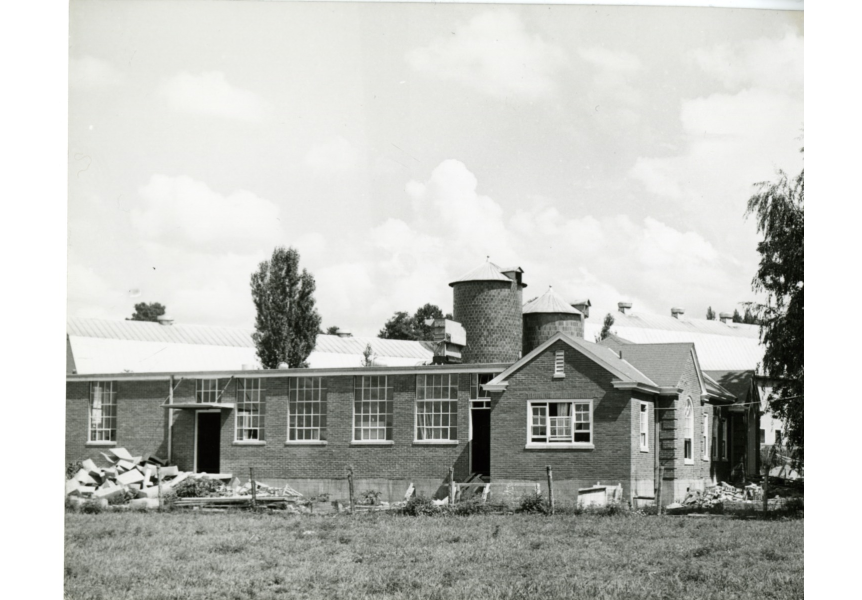 Architect: Charles F. Cellarius, Cincinnati, OH
Construction Supervision: Berea College Open
House/Dedication: November 11, 1940
Cost: $31,8OO
A new churn and McCormick Deering milking system were installed in the dairy barn during the fall of 1932 ( Berea Citizen, November 10, 1932, 1). But the Creamery was moved from the Goldthwait Building to a new building in 1940, and was again expanded in 1948. D. R. Durbin supervised the construction of this new facility. The running bond brick building had a single floor and nineteen rooms with a total of 6,400 square feet of space. Cellarius' design was symmetrical with two projecting brick quoined and gabled entrances; one entrance was glassed-in, the other  had  an arched  fan-lit  doorway. Every window was supported by  a flat arch. Each  room had its own designated process: churning, ice cream production, weighing and grading, pasteurizing, a laboratory and a large refrigeration room (Berea Citizen, September   14,   1939,  4;  October  31, 1940; PCM, May  11, and November  7, 1939; BTM, March 17, 1939). Professor H. Monier, Agriculture Department, said it was one of the most modern facilities in the state (Berea Citizen, November 4, 1940, 1). Using cream from  the Dairy and milk and cream purchased from about 50 dairy farmers in the area, butter, ice cream and cheese were produced for the College and for public sale. Ice cream machinery was purchased in 1936, for the Goldthwait Agricultural Building and the production of ice cream was expanded in 1940, when the process was moved to the new Creamery building  (PCM, June  6, 1936). In 1938, 132,000 pounds of butter  and 17,000 pounds of cottage cheese were produced (PAR, June 1938). In the early days milk was sold locally and delivered by horse drawn closed wagons. The horses were shod with rubber shoes and made a blob, blob sound as they came through  Berea neighborhoods (Virginia Ferrill Piland). As an agriculture major whose labor hours were in the Agriculture program in the 1930s, the author's father often talked about the milk products produced  and sold by the College.