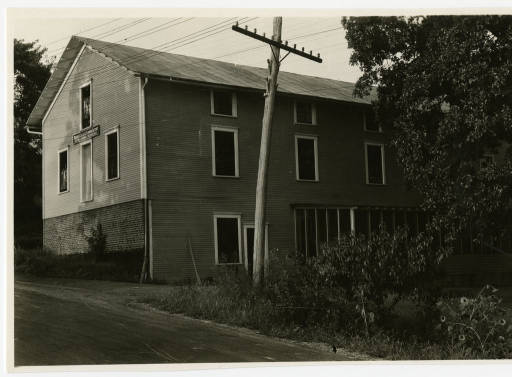 This two-story structure was authorized, built and used as a processing and canning factory for preservation of vegetables raised by the College's Agricultural Department and consumed in the boarding  halls. John Muncy was contracted  to build the wood frame and brick structure during the  spring and  early summer  of 1917,  and equipment to run the facility was purchased during the same year. College water and steam were installed in  1917-1918 (PCM, April 5, 19  and May 10, 1917). Washington Johnson was superintendent and Agriculture Professor Clark investigated means of drying fruits and vegetables. Because of World War I, College production from farm and garden had to be increased. In 1920, the gardens produced 12 acres of sweet corn, 6 tons of cabbage, 600 bushels of beans, 500 bushels of potatoes, and canned over 50,000 gallons of produce. Additionally 3,200 pounds of dried beans and corn were processed (PAR, 1922). During the ·· 1925  garden  season, the  Cannery  canned  1,400 gallons of blackberries, 4,500 gallons of apples, 7,000 gallons of beans and 4,000 gallons of tomatoes (PAR, 1925, 43). Various amounts of produce were preserved each year from July to October depending on the weather conditions of the region and the number of summer student workers.  In  1927, new large fans were installed  toimprove the air circulation and comfort of the workers ( Berea Citizen, July 28, 1927, 1). "People from the surrounding area could also bring in their garden produce and have it canned for a small fee, many times paying for it by working in the cannery." For example, in 1933, Virginia Ferriell worked with her mother and sisters to pick, clean and break beans to be canned at the Cannery (Virginia Ferriell Piland). New machinery was installed in 1938; however, by 1945 all canning and vegetable processing by the College had been discontinued. The Cannery was destroyed by fire during the early morning hours of Mountain Day, October 14, 1964 ( Berea  Citizen, Oct. 15, 1964).