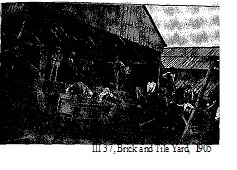 During the nineteenth century building campaigns, Berea had at least two brickyards. The first was south at the edge of the College gardens and the second one was over the ridge north of the Tabernacle and Howard Hall. The Board of Trustees authorized a third brick and tile plant at their June meeting, 1901 (BTM, June 5, 1901). Built at Rucker's Knob (Dead Horse Knob) this brickyard was constructed for at least two reasons: great quantities of bricks would be needed for future building construction and the College needed an industry for male students. The first bricks were hand made, but when construction of the Industrial Building (Edwards-1903) and the Main Chapel (Phelps Stokes-1904) were begun, machinery was purchased for more speedy production. The Berea Citizen, May 22, 1902, indicated "work on the new brick and tile  plant was going on rapidly. A Creager's Sons brick machine, capacity 15,000 a day, was already installed [but the engine to run the machine] had not yet arrived.  [In addition]  a switch  to the L & N Railroad was provided and the prospect for manufacturing brick at an early date was good". When in high production the brickyard could produce about 25,000 bricks a day. A. B. Arthur was appointed superintendent of thirty-three student workers in 1901 (he later was appointed superintendent  of the farm 1908-11).  "The College brickyard received its first order for a carload of bricks in early August and the first kiln of bricks made largely by students was being burnt" ( Berea Citizen, August, 1902). In 1908, Samuel Clark became the Brickyard superintendent. Because students often had only two hour periods a day for their labor positions, most of the production took place in the summer or by fathers of students as a kind of "proxy labor" (Berea Quarterly, January 6, 1906). By 1906, the Brickyard had four kilns and excess production was shipped to other cities. The Brick and Tile Yard was "closed out" on January 14, 1911 (Frost Diary).