Northeastern Kentucky banjo player, Ruben Cornelius Collins 1891-1980 is one of the many older generation Appalachian musicians documented in Hutchins Library's sound recordings collections. They are included in the collection that documents his son, Ruey 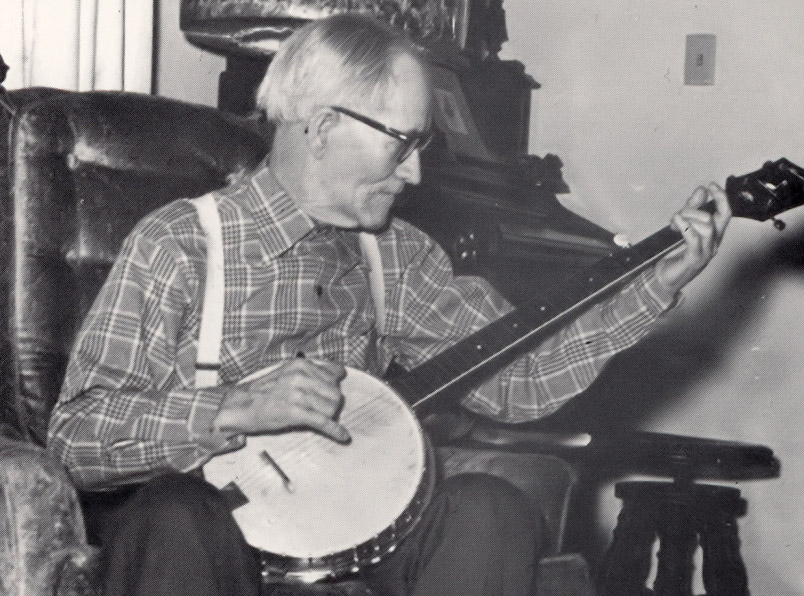 Northeastern Kentucky banjo player, Ruben Cornelius Collins 1891-1980 is one of the many older generation Appalachian musicians documented in Hutchins Library's sound recordings collections. They are included in the collection that documents his son, Ruey “Curley” Collins’ career as an early country musician / singer.

Known early as “Neal” by his family and “Pop” later in life, he was born in Hancock County, Tennessee but by the mid 1890’s his sharecropping father (Lewis) had moved the family to Millard in Pike County, Kentucky.

His first touched a banjo at age five, plucking his father’s too-heavy-to-lift homemade one laid flat on a bed. Picking out simple tunes soon followed with a bit of help from older brother Anderson. However for the most part, Neal learned on his own by watching and listening to others play.   By age nine he was recognized as being one of the better players for local barn dances and was in much demand as he entered his teen years.

Neal began delivering US-Mail by horseback at age fifteen (about 1906) on a 42 mile Pike County route.   His ever present banjo ensured him being a welcome overnight guest at which ever home he reached by nightfall.  These travels also provided exposure to the playing style and repertoire of other banjo players active in Pike County at that time.

Neal’s family moved to Boyd County, near Catlettsburg, Kentucky in about 1910.  There in about 1912, he married Maggie McKnight also an accomplished musician.  Musically gifted children followed and by the mid to late 1920’s Neal had formed a family string band with his two sons, Ruey and Ransome.  If a piano or organ was available wife Maggie was included along with daughter, Helen’s champion level dancing.

Passing the hat at their frequent weekend barn dance performances yielded a much needed supplement to Neal’s $20 per week regular job. Pressure to expand their repertoire at one point inspired Neal to come up with a new tune which he titled "Breaking Up Ice In The Allegheny".

Neal’s playing style has been described as 3 finger up-picking. He was using light weight metal picks years ahead of the practice becoming popular in the late 1940’s.  He adhered to strictly playing the melody, even behind vocals.  A distinctive of his playing was the plucking of open strings with his left hand along the neck of the banjo, which he referred to as “double noting”.

"Breaking Up Ice In The Allegheny" and the fourteen additional tunes heard in the Berea online collection are from home recordings by family members in the mid-1970s. Neal rarely tuned his banjo to standard pitch but it was always tuned perfectly to itself.   Each of the audio files include tunings and indications regarding their relativity to concert pitch.