Exhibits and Displays in Hutchins Library

For information on Library display policies and permanent exhibits. 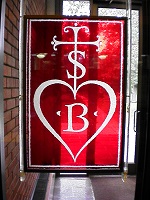 The printer's mark was a part of the colophon in many early incunabula.  The colophon appeared at the crowning part, or end of the early printed books.  It included the title of the book, the name of the author, the printer's name (sometimes device only), the place and date of printing, and not infrequently, notes invaluable to modern scholars -- edition, patron, etc.  In other words, the colophon gives the information we now find on the title page.  The printer's mark was a kind of trade mark.  It came to be a token of a master's pride in his work.

Mezzanine: Printer's marks on the glass panels on the west side (left to right):