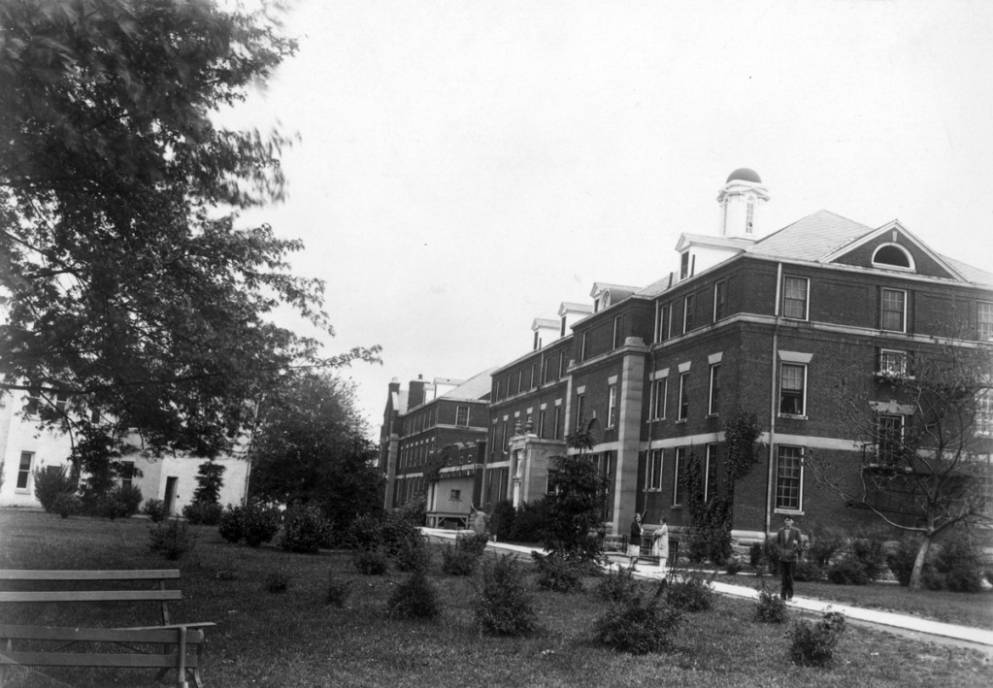 President William Frost and the College Board of Trustees had proposed for some years a Vocational and Foundation School campus east of the Industrial Building (Edwards ). After at least four years' discussion, land was finally purchased and city streets were rerouted (Estill, Richmond Pike and Center Streets). A public invitation to meet and discuss the intention to construct a women's dormitory for Kentucky women was announced in the Berea Citizen (May 30, 1912) and a subscription began during that very summer (PCM, June 17, 1912). During consultations with the Olmsted Associates in 1914, Frost expressed his immediate concern in building "the first of the dormitories" which would have a boarding hall in the basement and "three stories of girls' dormitories above" (Frost to Olmsted, June 12, 1914). Olmsted felt the boarding hall should be a part of the south residence hall of Frost's three proposed buildings and all units should "run parallel to the east line of Walnut Meadow Pike" (Olmsted to Frost, July 1, 1914). Frost wanted a kitchen to connect two residence halls with boarding halls in the basements of both ( Kentucky and Talcott). Bricks were ordered in 1912; but the lumber was not purchased until November 1914 (Frost Diary); construction did not begin until 1915 (Gibbs memo to Olmsted Associates May 18, 1915).

Kentucky Hall was just one building of a grand scheme for Vocational and Foundation students proposed by President Frost during the summer of 1915. A campus consisting of nine brick buildings was proposed to run parallel to Walnut Meadow Pike and be placed some one to two hundred feet apart to form four "quadrangles" as they marched eastward along the newly constructed Estill Street. Houses in the way of construction were to be purchased and moved to serve as model houses and the Baptist Church would soon be acquired and also moved. These buildings were to serve as both dormitories and classrooms. The boys' quadrangle was to be placed farthest east, though Frost realized that "additional costs would incur by putting boys beyond the Baptist Church"
(Frost to Olmsted, July 6, 1915). Kentucky, Talcott, Blue Ridge and Cumberland Halls were all that were realized fr om his nine-building proposal, though all four were built during the Frost administration .

Built for Vocational and Foundation women Kentucky Hall, across from the Industrial Building and beside the Castle and the Palace on the Vocational School campus, was financed from subscriptions given by Kentucky citizens. Because finances were slow to be pledged, construction did not begun until August, 1915, when the Board of Trustees decided to build only the basement and
first floor with a temporary roof (June 10 1915; Frost diary, August 13, 1915). The cornerstone was laid on December 8, 1915 (persons giving $12 or more had their names deposited in the cornerstone). The stone steps were donated by the Rowan County Free Stone Company (PCM, January 19, 1916). Numerous Kentucky notables were present for the dedication address by Thurston Ballard on October 4, 1916. On behalf of the many donors, Mrs. Yeager (wife of the Kentucky Governor) and Captain Jackson Morris of Pineville, KY, spoke at the dedication (Berea Citizen, October 12, 1916, 1 ; PAR, 1917). During the academic year 1915-16, Berea enrolled 1,920 students in the five various departments (Academy, Vocational, Foundation, Normal, College). By the 1940s only two departments existed, Foundation and College, and Freshmen College women were then housed in Kentucky Hall.

Each floor of Kentucky Hall had a parlor with a brick and tile surfaced fireplace to serve as a center of social interaction, baths with hot and cold water, an elevator for trunks and a basement trunk storage space. Fire stairs and exits were located at the ends of the building. Furnishings were ordered in July so that when the residence hall opened that fall, each room had two closets, two iron cots with mattresses three feet wide, bookcases, two desks and two chairs, and a dresser and mirror (Berea Citizen, October 12, 1916, 1; PCM, July 28, 1916; Frost diary). Kentucky Hall opened for Vocational girls at the time classes began during the fall term, 1916, even though the interior was not fully completed (BTM, June 8, 1916). The top floor and a Great Room and fire escapes were added at a later date (PCM, December 23, 1932). The building's cupola is a smaller sister of the one above Phelps Stokes Chapel. Kitchens and two dining rooms, "the Commons," filled the basement of Kentucky and Talcott Halls. Here three meals a day were served to about 800 Academy, Vocational and Foundation students (Berea Citizen, October 12, 1916, 1; PCM, October 16, 1915). The Commons were not closed until 1962 when the Alumni Building was completed and a new single College dining hall was created.

The English bond, red brick building is similar to academic residence halls across the nation. Cady's more formal asymmetrically placed west entrance incorporated dressed limestone and fan-lit windows in an eighteenth century American Colonial style, similar to that used by architect Gray on the later Emery Building. This single-story entrance is flanked by dressed limestone Doric pilasters . Rising above it, Cady placed a two-story arched modified Palladian staircase window with a carved limestone keystone. The third floor windows rest on a projecting stringcourse and the roof line has neither cornice nor eaves. The south end has a fan-lit attic.

Kentucky Annex, a four-apartment single-story unit with a central lightwell and entrance hall connected Talcott Hall to Kentucky Hall. Facing east, this unit incorporated a grand scaled symmetrical entrance of dressed limestone, a tower with arched window, limestone scrolls and patterned brick at the crenellated parapet wall and roof. During the spring of 1 924 and eight years after construction, evergreens were planted along Dixie Highway/Estill Street to improve privacy for the women in the residence halls. 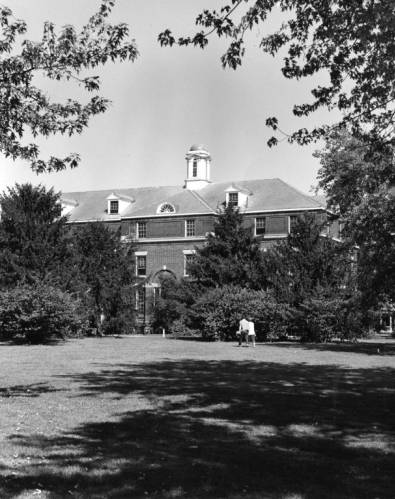 Kentucky Hall was closed during the 1 974-75 school year for restoration and refurbishing but further renovation took place during 1980-81 and was completed by student labor. Kentucky Annex was renovated in 1989. During 2001-2003, Kentucky Hall, Talcott Hall and Kentucky Annex were completely gutted and rebuilt. New wiring and plumbing were installed as were new heating and air conditioning systems .

The architects of GBBN, Joe Turley the principal, working with new efficiency standards of Berea's energy master plan, were very creative in the use of spaces. Both buildings were gutted and rebuilt from the inside out. They are still student residence halls, but the spaces invite small group interaction, collaboration and "community building" in a newly created space that was the original Kentucky Annex; it became a kind of "Post Modern" sky-lit atrium linking both residence halls. A three floor, central elevator and handicapped accessible new entrance were built into the Annex to provide easy student movement and access from the top floor to the basement. East and west steel encased dark tinted thermal windows (Kal wall) run the height of the upper two-story walls . The original exterior walls of Kentucky and Talcott were cleaned and tuck-pointed and those on the north and south ends became interior brick walls of the Annexatrium lounges. Honey-colored oak was used as trim, floors were carpeted and black painted steel and unpainted brick can be seen at every level. This atrium connects and provides areas for socializing and study. In fact, the original tower of the Annex has become a glass-enclosed lounge and seemingly floats above the east entrance. However, it is connected to the lounge by "a skywalk, a stairway to heaven".

Small kitchens, community baths, and laundry facilities are located on every residential floor as are small student lounges. A few rooms share a bath as in a suite but most rooms are serviced by common baths that are "down the hall". Every hallway has a common laundry, kitchen and lounge. Rooms are still entered by a central hallway, but ceilings were dropped and new lighting illuminates the earlier dark hallways. In every place possible, the original hardwood floors were saved and refinished, as were doors and some of the original furnishings. The basements that had originally been the " Commons" now are used as residence rooms, lounges and recreational rooms for the two residence halls . Both wood and steel were used in the wall construction and a more delicate gypsum drywall covers the contemporary surfaces. The residence halls are serviced by 125 ton chillers and an ERU (energy recovery unit). Two two-bedroom apartments for resident Collegium members were designed and built into the extreme ends of both residence halls. For the Berea Campus, GBBN Architects created one of the most unique examples where a sympathetic use of old materials creates a new, functional and intriguing space; the traditional meets the post modern! Today men are housed in Kentucky and women are housed in Talcott.