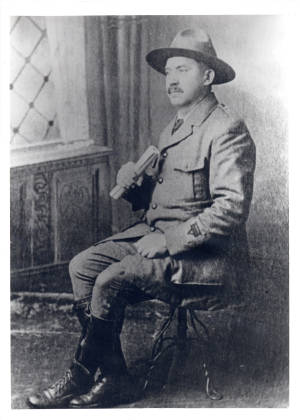 James Bond was born a slave during the Civil War on September 5, 1863.  He was born near Lawrenceburg, Kentucky.  He grew up in Barbourville in Knox Country, Kentucky.  His mother, Jane, was a slave who in her teens was given as a “gift” slave to a bride of a white slave-owner for their wedding.  Jane did not serve only as a slave, but also as the mistress of her master during his wife’s pregnancy.  That is how James Bond, along with his brother Henry, was born as child of a slave woman and white slave master – Preston Bond.

James Bond admired his mother not just as a mother, but also as a strong woman.  His mother educated and inspired both of her sons to become the best possible in their future life and career.  She was their encouragement, as Bond stated, “to be somebody and make a man of myself” and to behave oneself in an honest and respectful manner.  His mother was a “heroic figure” who served as a symbol of “…the mute, yet glorious, yet tragic destiny of the Negro slave woman, bowed indeed, beneath the weight of centuries, yet possessed of a spark of courage and hope that transfigured her life and shed a radiance upon the life of those with whom she came in contact.”

Thus, Bond became very aware of the injustice that slavery carried within itself and its effects on many lives.  Despite the evils of slavery and its consequences, Bond was an optimist who declared his fortune to have been born as an African American in an American society.  He took great interest in racial issues in American society of his time.  Bond’s life in Kentucky and post-Civil War atmosphere of the South was not without challenges.  But those challenges served Bond as an encouragement to explore the world beyond the Appalachian Mountains.

In 1879 Bond traveled a long way through the state of Kentucky and reached Berea College.  He first discovered Berea during his visit to the white Jarvis family, for whom his mother worked.  Prior to his arrival at the Berea College, Bond could neither write nor read, but he took up the challenge.  Sixteen years later he successfully graduated.  He was among only two thousand other fortunate African Americans to hold a college degree when he graduated from Berea College with a B.S. degree in 1892.  At the graduation, the college faculty even chose him to deliver the commencement speech, in which Bond demonstrated his hopeful and wise state of spirit and mind.  Bond did not stop at pursuing his higher education after graduation from Berea College.  He continued his studies in theology and ministry at Oberlin College, and in 1895 he graduated with Bachelor of Divinity.  Moreover, his honorary degrees from Berea College and Master of Science degree earned in 1897 and Doctor of Divinity degree earned in 1901 broadened his career opportunities in becoming a minister.

As a minister, Reverend or Dr. Bond dedicated himself to serving his nation and people in churches in Alabama and Tennessee.  Yet, he kept in close contact with Berea College.  From 1896 to 1912 he served as the first African American Trustee and Board Secretary of Berea College.  He actively and enthusiastically supported the College, despite racist obstacles such as the Kentucky Day Law of 1904.  When the Day Law prohibited interracial education, Bond took up the challenge and responsibility of the creation and supervision of the Lincoln Institute by fundraising.  Lincoln Institute was situated near Simpsonville, Kentucky, and it granted former African American students of Berea College the opportunity to continue their education.  From 1907 to 1914, Dr. Bond vigorously and loyally dedicated himself to keeping John Fee’s vision alive of granting equal education for all individuals.

Bond’s loyalty and dedication to his nation was so great that he even volunteered to join the U.S. Army when the U.S. entered World War I.  However, due to his age he was unable to enlist in the U.S. Army.  Instead, he served as the YMCA Service Director at Camp Zachary Taylor in Louisville, which enabled him to teach night classes to soldiers.  Bond was so skillful a multi-tasker that for ten years after the war he administered summer camps for African American youth as Secretary of the Kentucky YMCA while also serving as the Director of the Kentucky Interracial Commission.  He also served as a prominent public speaker and civil rights activist who preached for more interracial equality and interracial dialogue.  He advocated granting opportunities to everyone who wished to receive education and be academically involved in their communities.  He passionately believed in the power and magic of education.

Bond passionately disagreed with the act of utilizing human individuals as slaves.  He thought that Lincoln’s Emancipation Proclamation had not brought full justice and equality to African-Americans.  He argued that many white Americans assumed that the hardships, especially economic, of African-Americans had ended immediately after declaration of Emancipation.  He believed that the hardships and dangers had increased for African-Americans.  One of these was the Ku Klux Klan, from the hands of which many suffered brutal and torturous deaths.  Bond wrote a weekly column called “Interracially Speaking” for a Lexington newspaper, where he encouraged his readers to establish less segregated and more racially equal communities.  He was a passionate opponent of segregation and an active advocate of interracial communication.

Bond wholeheartedly admired and respected John G. Fee.  When Fee died in 1901, Bond delivered a memorial speech at Fee’s funeral ceremony.  In his speech, Bond expressed his gratitude and fortune to have met as great a man as John G. Fee.  He described Fee as the man who was a “…friend to each and all and sought the highest good of all alike.  He loved men, not conditions; humanity, not races or nationalities. … John G. Fee was a benefactor of the world.  His name and deeds are the heritage of humanity.”  Bond observed that “Another of the long list of Americans who have made the nineteenth century famous has gone.”

In 2010, the Kentucky Commission on Human Rights listed James Bond among many other civil rights leaders in the Kentucky Civil Rights Hall of Fame, who has greatly and tirelessly committed himself for the well-being of his people and the American nation.

Reverend Bond died at the age of 65 in Louisville, Kentucky, on January 15, 1929.  Yet, Bond’s death did not put an end to the Bond family legacy.  Reverend Bond’s six children and his brother’s six children all received a good education and became successful individuals.  James Bond’s sons Horace Mann Bond and J. Max Bond succeeded in public service.  They were educators who actively promoted and educational opportunities not only throughout the American nation, but even internationally.  Both served as presidents of the universities they either studied in or established.  Bond’s grandson, Horace Mann Bond’s son Horace Julian Bond, became the first African American who was nominated to the office of Vice-President of the United States in the 1968 elections.  For almost a decade, he served as the head of the NAACP.  He was the co-founder and leader of the Southern Poverty Law Center.  Many descendants of the Bond family are now spread throughout the American nation as well as throughout various professions.  They are architects, drama and speech teachers, economists, and so forth.