Douglas Ensminger was born in Strover, Missouri in 1910. He attended the University of Missouri and later Cornell University where he received his Ph.D. in 1939. In that same year he became the director of Extension in Rural Sociology in the United States Department of Agriculture and worked there until he became head of the Ford Foundation’s work in India in 1951. 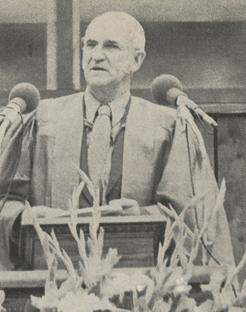 Biography
Ensminger worked as the Ford Foundation’s representative in India for 19 years. He soon became recognized by India’s leaders for his ability and self-effacing devotion to the welfare of the country. Eventually his counsel became sought after as well as the Ford Foundation’s donations. He supported many public and private programs with the intention to increase the nation’s food production, reduce birthrate, improve the quality of education, improve the preparation of public service personnel and public administration, and ultimately improve the quality of life in both rural and urban India. When Ensminger returned to the United States in 1970, he became Coordinator of socio-economic studies and professor of sociology at the University of Missouri.

When Louis Smith, Dean and Chairman of the Honorary Degrees Committee, discovered that Ensminger was leaving India he wrote him this letter:
"In the years since independence, no westerner that I know of has had so wise and constructive an influence on the development of plans and programs for India. With great tact, energy, and understanding, you have devoted yourself to the welfare on India. I have marveled at your keen eye for the main chance, your assessment of priorities, and your extraordinary sense of timing. Your empathy with the people there was so great that it seemed at times that you were almost an Indian yourself. No westerner was trusted more or held in higher regard. I hope the Ford Foundation asks a well qualified person to write in book form the record of your Indian work. But knowing your modesty and your constant desire for others to have full credit rather than to share it with you, I’m confident you would not permit the book to be written."

Berea College awarded Douglas Ensminger the honorary degree of Doctor of Laws in 1971.

Some Thoughts about PEACE
By Douglas Ensminger

"Following completion of my Ph.D. work at Cornell University on 1939, I went to the U.S. Department of Agriculture in Washington, D.C. in charge of the Department’s research in Community Organization. I shall always remember one of the very early research projects was in a Maryland county near Washington, D.C. The research project was to develop techniques for identifying individuals who had influence in the community. The people in one of the small neighborhoods in the area being studied, were known as, “We sorts”. When asked why the people referred to themselves as “We sorts” they replied, “We aren’t like the other sorts, we are We sorts”.

While I know I am expected to address my remarks on this very special occasion to the graduating class, for special reasons I want to share with all attending this historic occasion, some thoughts about peace.

I want to make a plea that we become as deeply concerned and committed working to achieve the conditions of peace as we are presently agitated by the war in Vietnam. The record is clear we will speak our minds and demonstrate against war. Why not with equal vigor speak up, demonstrate and work for peace?

We have every right to ask, “Will our efforts contribute to the conditions of peace?”, “Is peace achievable?”

I want to assure members of the graduating class and parents on the issue of peace there is no generation gap. When it comes to wanting peace for all mankind, students and parents are truly “We sorts”. As “We sorts” wanting peace, we must think and act differently than “Those sorts” who feel working for peace is the job of the President, the Congress and the U.N.

Achieving peace must become an intellectual and emotional concern of all people. But just wanting peace won’t remove continuous threats of war. If “We sorts” are to contribute in specific ways toward bringing the world nearer peace, we need to know what are some of the things causing tensions within and between nations that lead to wars. We need to understand we can contribute to removing of the conditions which create these tensions and move nations to war.

There are two very specific areas – one social and one economic – both identifiable causes of unrest, tensions and conflict that lead to wars. They are the depressed, disadvantaged people in all countries of the world who are increasingly insisting they be recognized as social equals and have opportunities to work and earn a decent living. Working for all people to achieve social equality and to improve the quality of life for all people in all countries of the world are specific ways “We sorts” can contribute to improving the conditions of peace.

We have the Pentagon with its annual defense budget so large few can comprehend its magnitude. But we don’t have within our government an organized structure politically led, manned by professionals, and backed by a budget, having as its primary mission working to achieve the conditions of peace.

While achieving the conditions of peace must first and foremost be a continuing concern of “We sort”, in the future we need an organized structure within our government whose mission is working to achieve the conditions of peace for the world. We have the experience of wars, we know we can organize for battle, spend military and make sacrifices. But have we never tried organizing for peace? If peace for mankind is to be an achievable objective, we need within the U.S. Government a Department for Peace, politically led, manned by professionals and backed by resources.

If we understand some of the present deterrents to peace and are prepared to make commitments to work for their removal, “We sorts” can if backed by the governments of all nations, and supported by resources of the world community, contribute toward the presently disadvantaged people of the world achieving social and economic justice. And when these disadvantaged people of the world achieve social and economic justice, we will as one people be moving into the promised land – peace for all people in all nations of the world."