The student industry known as The Candy Kitchen began in 1930 in the home of Mr. and Mrs. H. Clyde Jones, and moved to the Berea College campus under the direction of the Joneses in November 1931. It first occupied the old Masonic Hall on Chestnut Street, but soon out grew the space and was moved to in 1933. The department "employed 18 girls" and early favorites included Black Walnut Brittle, Pecan Brittle, Peanut Brittle, and fruit cake.

By 1938, the Candy Kitchen was receiving orders from movie stars and wealthy New Yorkers, and in 1939 moved into larger quarters within the Trades, where it occupied the second and third floors. A viewing hallway was constructed through the factory so visitors could watch the manufacturing processes. In the 1940s, it was reported as "the best profit maker" on campus with ever growing sales. Products included the "famous" beaten biscuits and special holiday fruit cake. 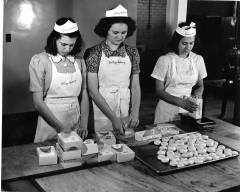 The Candy Kitchen was also well known for its hand decorated tea sugars, which are still collectible today.

The Candy Kitchen closed on December 30, 1970. Newspaper reports stated that the rising costs of production coupled with declining sales necessitated the closure. Vice President of Business at the time, Karl Warming, also indicated that the Candy Kitchen was a "victim of technological change" and that similar candies were being mass produced in larger factories and becoming more widely available, thus causing competition the small college industry could not meet. At the time of the closure, 35 students and 5 staff members worked in the department.