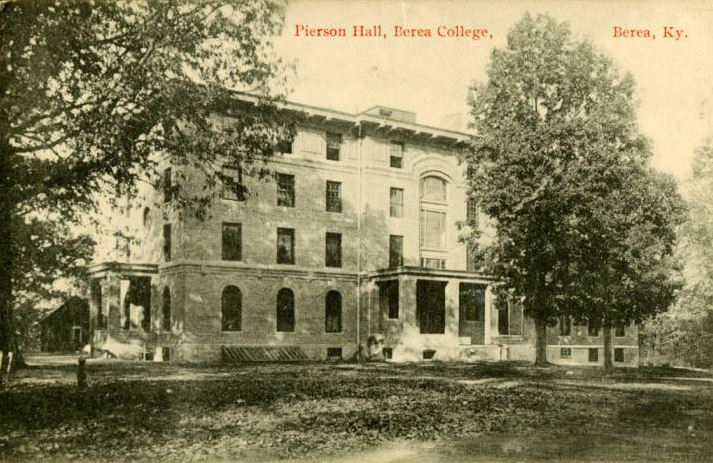 Medical doctor and man of great real estate wealth, Dr. Daniel Kimball Pearsons of Chicago gave $25 ,000 in 1909 to build this four-story College men's residence hall (BTM, June 9, 1909; October 20, 1909). The gift came with the provision that student workers build the structure. Pearsons also gave thousands of dollars to Berea's Endowment Fund and College Waterworks, saying: "I regard the fifty thousand dollars which I put into the waterworks of Berea College as the best investment I ever made . I never gave away any money that returned me such satisfaction" (Berea Alumnus, 23:3, 51-52; Berea Citizen, May 3, 1917). Pearsons also gave funds to Knox College, Olivet College, Doane College and other Christian colleges. At Dr. Pearsons' death in 1912, President Frost said the College lost "its largest benefactor [whose] timely assistance not only insured the perpetuity of the institution, but widely extended its resources" (BTM, June 5, 1912). The site for this men's residence hall was decided upon and surveyed in May and excavations were well underway by June, 1909. The cornerstone was laid on June 10, 1909, and contains: a Berea Citizen (June 3, 1909), a Berea Quarterly (April 1909 ), a Berea College Catalog (1909-10), a letter from Dr. Pearsons, the College's Articles of Incorporation, 1892 College Resolutions, the Berea College Constitution, Bylaws and other documents.

Constructed of College-made red bricks, Pearsons Hall was built along side the earlier wooden Howard Hall and had rooms ten by fifteen feet that were equipped with both electricity and steam heat; laundries were installed on the first and third floors. Two of the floors (first and third) also had baths with two showers (making a total of four showers in the building), hot and cold water and
terrazzo floors. Rooms for guests and a residence for the supervising teacher were also included in the design (Berea Citizen, December 30, 1909, 1; PCM, June 24 and November 10, 1909; April 6 and June 11, 1911). A symmetrical design, the rather chaste structure appears to be built on a limestone base, has two limestone string courses, and a rather severe looking central entrance porch supported by brick piers. The first floor double hung windows are set in brick arches with a limestone keystone but the windows on the other three floors are set into flat brick arches with reveals. The overhanging low hipped roof and cornice are supported on brackets and the main central stairwell is lit by a large arched window wall. Pearsons Hall opened for about 140 male students during the fall semester, 1910, and men) in the Wigwam and Barracks were allowed to use the toilets in the hall during the winter term, 1910. All walls were plastered for fire protection in January, 1911 (PCM). College men, exclusive of other academic departments' male students, occupied the residence in the winter term, 1916. All rooms were furnished with two beds, two desks and chairs, a chest of drawers and a single small closet. The building was renovated in 1934- 1935, bathrooms were refurbished in 1939, and two new bathrooms on the second and fourth floors were added in 1959. A sprinkler system designed for fire suppression, a fire escape and new wiring were installed in 1951 (BTM, February 9, and August 16, 1951). An external but enclosed fire escape was added in 1981 costing $71,000. Major renovations took place in 1971 , 1981 and 1987. Pearsons Hall became a women's residence beginning in the fall of 1973. As with all the residence halls, various faculty members served as "dorm-parents ". At publication, Pearsons is on a short list of buildings to be completely renovated.

While this residence hall was being built President Frost, because of inflammatory rheumatism, requested a leave of absence and thus did not watch the daily construction as he did with most College buildings (BTM, October 20, 1909). Following the passage of the Day Law in 1904, President Frost had worked hard to develop and finance the Adjustment Fund to create Lincoln Institute and was physically exhausted. He left for Europe on November 10, 1909; stayed in Brighton, England, until early summer; visited France and Scotland (Andrew Carnegie); and returned to campus on August 19, 1910. At the same time of Pearsons' construction, the Olmsted Associates were laying out the site for Lincoln Institute and were about ready to survey and plot Berea's own campus grounds. The Olmsted surveying team arrived on campus during September 1910, only a few days after Frost's
return from Europe (Frost Diary) . Wo men made up half the student enrollment at Berea in 1910; however, only three percent of the American college age population attended college. Forty percent of those three percent were women. 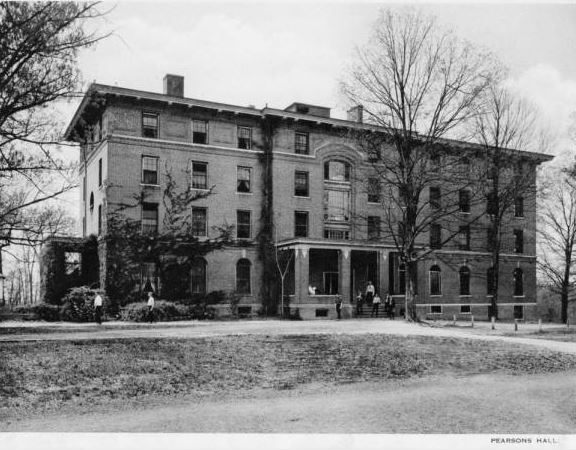