Square Dancing in the Kentucky Foothills

Mary Lee Jackson’s square dance teams in Berea and John Bill Allen’s calling for the Berea community Home-Coming in the 1950s; Geneva Botkin’s performances at Renfro Valley and the American Legion square dance contest at Estill County High School beginning in the 1940s; the party house on Christmas Ridge and square dances as fundraisers for schools. From learning about dances in homes in the early twentieth century to watching videos of 1970s clogging teams, this project has involved sleuth work that led me through decades and across several Kentucky counties. I believe I now have a sketch of these related dance traditions in the foothills near Berea and parts of central and north central Kentucky. The work has drawn on materials in the Berea College Sound Archives as well as on interviews with former dancers and on bibliographic research. I am grateful for the help and support provided by Harry Rice, Sound Archivist; Sharyn Mitchell, Research Services Specialist; John Bondurant, Sound Preservation and Access Specialist; Sarah Elrod, Video Editing Assistant; and the other staff members of the Berea College Department of Special Collections and Archives. I appreciate the time given me by each of the people I interviewed. I learned so much from them, not just about dancing, but also about the history and culture of the area. I am also grateful to John Ramsay and Loyal Jones, who made use of that new-fangled 1970s video and audio technology to record the footage that has made it possible to actually see some of the dancing from the 1970s.

This article tells the story as I have come to understand it so far. I know there are others who could fill in more blanks and provide more information, and I welcome feedback.

In Berea and surrounding counties, square dancing, the type done in a big circle that divides into smaller “squares” of two couples, seems to have been popular from the beginning of the twentieth century. In the early years of the century, it took place predominantly in homes, moving to lodges, schools, and other larger places by the 1930s and 40s. By mid-century the venues and occasions began to shift toward competitions and festivals, but people danced in local establishments until the 1970s. Social square dancing seems not to exist in this area as a regular recreation any more, but clogging teams still perform and compete, some using square dance figures and others dancing in lines and other formations. Old style footwork dancing, similar to what is known elsewhere as flatfooting, was usually called jig dancing or, in some places, soft shoe. Dancers performed individual rhythms to the music, with the feet generally close to the floor. Taps were not usually worn. As will be seen, this old style dancing evolved and was replaced in certain areas in the 1960s by precision clogging, though the old style can still be seen in other places, and some people enjoy doing both freestyle and precision. It should be said that many of those who square danced also enjoyed the popular dances of their day: waltz, two step, jitterbug, rock ‘n’ roll, respectively. Some also had experience with folk dancing, promoted by the Council of the Southern Mountains and the settlement school network.[1]

Evidence exists that square dancing and flatfooting or jig dancing took place in and around Berea in the early 1900s. In 1915, Professor John F. Smith, Professor at Berea Normal School (a part of Berea College) asked his students to list songs and fiddle and banjo tunes from their home areas in Eastern Kentucky and Tennessee. 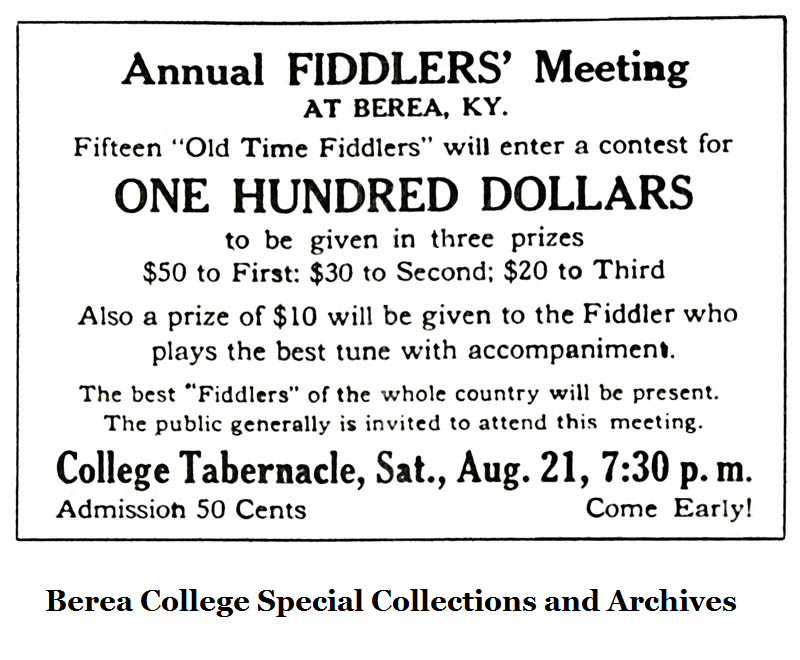 The resulting lists from Estill, Madison, and Garrard Counties include a large number of fiddle tunes associated with dancing. Some are noted as “old fashioned dances” like “Old Dan Tucker,” a play party type dance from the 1800s. Square dancing became popular around the turn of the twentieth century and many of the tunes listed are mentioned by dancers and musicians as having been associated with square dancing and flatfooting or jig dancing. Fiddle contests were held in the Berea College Tabernacle from 1915 until the late 1920s. Smith described the one held in 1919 in a newspaper account, and it is clear that the music is associated with movement. Audience members may have been simply tapping their feet, or they may have been jig dancing.[2]

By this time feet had begun to slow down a little, but were all set a-wiggle in high glee by Millard Ramsey with the crack dance tune “Adeline” on his famous Black Nancy [fiddle]. …Millard is a bit reckless with Black Nancy, but the old instrument is a queen among fiddles, and when she speaks corns cease to ache and a merry thrill creeps into every toe.

Musician John Harrod had direct or indirect contact with dance communities all over central Kentucky beginning in the 1970s, interviewing many musicians. He offered numerous stories like the following, about an area in Owen County:

“There was this stretch of about three or four miles [of road] between routes 127 and 368- nothing but a gravel road that went down Severn Creek and forded the creek in two or three places. It was this beautiful valley and these abandoned farms with old farmhouses and in some cases log cabins, and this little section of creek between these two roads – it was just beautiful. [Former Severn Creek resident] Ace Borne said that when he was a boy in the 1910s, [a family lived in every home and] they had a square dance every night of the week in the winter on Severn Creek. He said they’d go from house to house. The first night it would be at the first house, the next night it would be at the next house, and the next night at the next.” Musicians Lewis and Donna Lamb said their elders described a similar custom in Garrard County.[3]

Billy F. “Red” Williams, a dancer and dance caller from Estill County, said that his parents told how, in the 1920s and 30s, they moved all the furniture out of the house and had dances on a regular basis. Travis Wells, an Estill county musician and dancer, named a number of good dancers from these earlier generations, including Maurice Campbell, Claude Todd, Gordon Wells and his sister Viney Wells. Wells said that with their “hobnail shoes [they would] make more racket than a mule in a barn.”[4]

Evidence exists that square dancing took place in Berea in the early twentieth century as well. In 1928, Ida Levin published a book through the Recreation Council in Louisville, Kentucky entitled Kentucky Square Dances, giving credit to Dr. C.B. Marcum of Berea for providing the “changes” or figures for the book. C.B. Marcum was a physician born in Clay County, Kentucky and known in the 1920s for his public health work in Big Creek in that county, but he seems to have had a residence in Berea prior to that time, and he passed away in Madison County in 1941. We may never know whether his square dance experience actually came from Clay County or Berea, but it did come from the turn of the twentieth century, and Levin encountered him in Berea.[5] 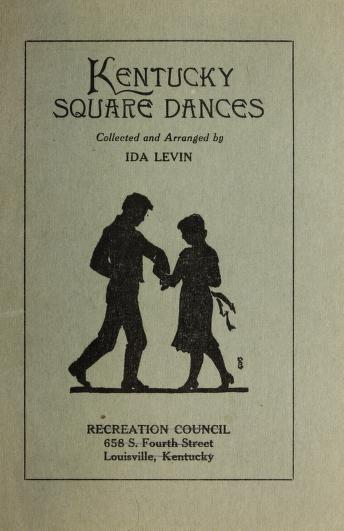 That same Dr. C.B. Marcum may have been one of the owners of a house located at the end of Christmas Ridge, a road outside Berea. Dr. John Baker, also originally from Clay County, and others were co-owners. The house was built in the 1930s as Masonic Lodge #11 – reportedly so called for the 11 families who owned it and partied and danced there. It was outside the city limits, and a private club, so alcohol could be served. It seems to have continued as the “headquarters of square dancing,” according to Philip and Fanny Harrison, into the 1950s. Fiddler Vernon “Peanut” Payne remembered this house as a place for dances, and the Harrisons danced there in the early years, along with Oscar and Carrie Morgan, Dr. Baker and his wife, Bill and Daisy Finnell, and others.[6]

Square dancing was in the process of moving out of the home in the 1930s, to private places like Masonic Lodge #11 and to public places like schools. Geneva Botkin reported that it was a popular fundraiser at area schools like Silver Creek during the 1930s. “Adults would have a big circle or two, and the kids would be over in the corner learning to square dance. Parents would bring cakes and they would auction them off and this way the school would make money for playground equipment or something. The square dancing in the circle was always popular when I was young.” Fanny Harrison said that she started square dancing in 1937 at dances held at Berea High School, led by Oscar and Carrie Morgan, teachers in Cartersville in Garrard County, who lived in Berea. “Every Saturday night they came to old fruit jar high school – Berea High School - and taught us kids from all around, Rockcastle County and Garrard County, and Berea – all the kids that could afford to come and they taught us square dancing every Saturday night.” Interestingly, she first learned about these dances from her friend, Nancy Allen, first cousin to John Bill Allen, whom we will meet below.[7] 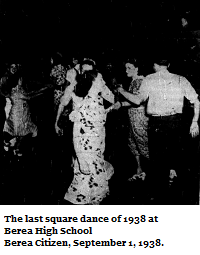 In the late 1930s, the WPA indirectly supported square dance in Berea. They established a Play Center, using Berea High School and the Memorial Park. John Bill Allen was the first director of the Play Center in 1938, during the time that he was a student at Berea College. Besides arranging kite-flying contests, marble contests and other activities, Allen organized a square dance club at Berea High School once a week, all summer long, until the gym was once again required for high school sports.[8] Allen was one of the first Berea College Country Dancers under Frank Smith and had been a member of the Berea College Academy Folk Club under Oscar Gunkler before that. During his Folk Club experience he had gathered a number of books 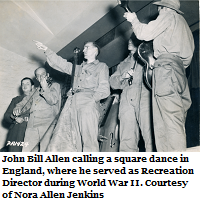 on folk dance, authored by Oscar Gunkler and by Georg Bidstrup. None of the books contained square dance directions and Frank Smith taught folk dance rather than square dance at that time, but Allen must have developed a love for dance as recreation in part because of his Folk Club and Country Dancer experience. John Bill Allen continued dancing and calling square dances, becoming the leader of the first square dance team at Renfro Valley in 1939, and calling dance as part of his assignment as Recreation Director for troops in England during World War II.[9]