Angus Augustus Burleigh (c1848 - 1931) was an influential African American graduate of Berea College.  He served in the Union Army during the Civil War, and later he became a minister in California. 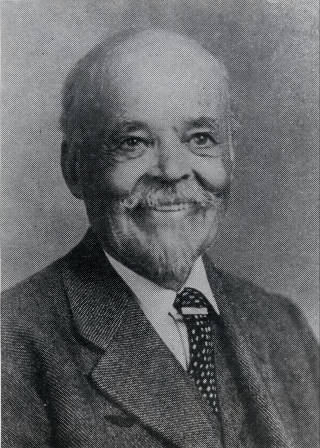 Angus Burleigh was born in 1848, somewhere on the Atlantic Ocean.  He was the son of an African American mother – Charlotta De Dasco - and a sea captain of English descent, Charles A. Burleigh.  His mother’s descent is unclear, because Angus Burleigh declared her of Moorish descent from Granada, Spain, whereas many other sources describe her as African American slave born in Florida.  Angus Burleigh was born free, but after his father’s death, both he and his mother were forced into slavery.  At first they served as slaves in Virginia.  Later they were moved to Kentucky.

On August 22, 1864, at the age of sixteen, Angus Burleigh enlisted in the 12th U.S. Colored Heavy Artillery at Camp Nelson, Kentucky.  By November 2, 1865, he was promoted to the rank of Sergeant.  After he was discharged, Burleigh met John G. Fee on April 24, 1866.  Fee invited him to attend Berea College.  Burleigh enthusiastically accepted the offer and arrived at Berea on foot after a long trip from Camp Nelson.  Burleigh was one of the first African American males to attend and graduate from Berea College.  He graduated in 1875 with an A.B. and A.M. degree in Classics.

Burleigh followed various career paths and professions.  He was a minister at an African Methodist Episcopal Church and served as chaplain in the U.S. Army from around 1874 to 1906.  He also served as a schoolteacher, salesperson, and farmer.

Burleigh married Louisa E. Shaffer in Greene County, Ohio, on November 25, 1875.  They had three children: two sons – Otto F. and Cornelius H. and one daughter – Benitta.  Throughout his life he lived in various parts of the United States, such as Illinois, New York, Wisconsin, Indiana and California.  He settled permanently in Hermosa Beach, California.

Burleigh was 93 when he died on May 24, 1938, in the National Military Home in the Veteran’s Administration Facility in Los Angeles, California. He was buried in Los Angeles.  In the early 1930s, Burleigh was considered the oldest living Berea College graduate.

A.A. Burleigh wrote a booklet called John G. Fee, Founder of Berea College.  In his booklet, he shared his knowledge of John G. Fee’s biography, as well as his own memories of meeting and working Fee.  The booklet extensively narrates the early history and construction of Berea College.