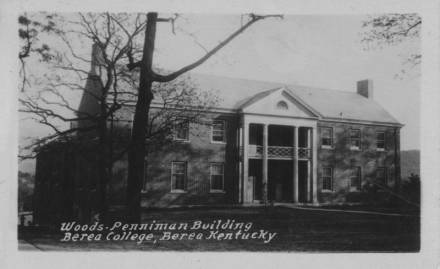 Construction: A. D. Harrington, Superintendent of Construction  and Woodwork

A women's gymnasium was an idea discussed by President Frost and the Olmsted Associates during the, fall of 1913. Frost had suggested a gymnasium on the site of the Dodge Barn that was dose  to the center of the women's campus and its tennis courts, but was advised against that location because of Morningside Hospital's close proximity and all the noise associated with a gymnasium. Instead of that Academy School Campus location, G. Gibbs of the Olmsted Associates suggested the site of the gardens south of Ladies' Hall, because the "site was advantageous in that a large field could be developed south of the building and the building could be extended at any time" even though a thirty foot grade would have to be walked to   get to the fields (Gibbs letter to the Olmsted Associates, November 19, 1913). In the end as a stopgap measure, the Board of Trustees purchased Dodge Barn and turned it into a women's gymnasium, Dodge Gym. Ultimately, the space between the President's Home and  Ladies'  Hall and north of the gardens, as proposed by the Olmsted Associates and accepted by the Board of Trustees, had the "proper relationship to future buildings . . . with outdoor grounds located in the lowlands. . . and protected  from the public  by the surrounding grounds" (Olmsted to Frost, May 29, 1914). This proposed building would house a women’s gymnasium and space for the YWCA.

By the 1920s, the Rev. Henry M. Penniman, Professor of Christian Evidences, Field Agent, General Evangelist for Berea and a close friend of. President  Frost, helped  raise  the  funds  for this ·women's Gymnasium.  Henry Dickinson Woods, an engineer and wholesale florist in West Newton, MA, (whose father was a close friend of Henry Penniman's father), gave the lion's share of funds to build the gymnasium.  However, only upon Mr. Pennina’s death in 1931, was Woods' generous gift published and recognized by the Berea Community  (BCABG, box 4). The name Woods­ Penniman was given to the building, which was then  "dedicated to old time friendship  and young womanhood". Various persons  spoke at the October dedication: Rev. Penniman, former President Frost, Miss Bowersox (Dean of Women) and Miss Bertha Onde of the National Board of the YWCA.

The selected site, south of Chestnut Street and  on the women's campus, was  thirty-seven  feet south and forty-four feet west of Ladies' Hall. It was considered a more suitable location and was in the middle of "the women's buildings" ( Berea Citizen, October  21,  1926,  1). Architects  Gray and Lawrence  designed  the plans  and elevation in three parts so that me various sections could be built only as money became  available.The south Gymnasium with lockers and showers, section A, was the first section to be built ( during the early part of 1925 but completed by November); these rooms opened onto the lands that had once been the College Gardens and were now used for women's outdoor sports. Section B, the  north and campus side, was the second section to be constructed and housed the community  social room, kitchen, a suite of rooms for the women's Doctor, a suite for the women's  athletic director and second floor apartments and other offices. The third and last part, section C, was constructed on top of the gymnasium and served as an assembly hall seating about 500 (BTM, November  14, 1922). These later sections and rooms were convenient to and extended out onto the main campus. Furnishings for all parts of the building relied on simple, dignified colonial designs.Architect Gray chose red brick in Flemish bond to dress the exterior of this symmetrical "plantation house." Its two-story facade incorporates  flat arched windows  with  only a little limestone trim. In keeping with limited ornamentation,  the  timbers  and steel  of the roof construction  in the  auditorium  were  left exposed and unembellished.The central portico is about the only decoration on this very plain building. This portico is supported by Doric piers and columns and has a lattice trimmed balcony rail at the second floor. The facia is dentiled and the eaves only slightly overhang the walls.

The gymnasium section was built and dedicated in December, 1925, but the remaining two parts (offices, apartments and auditorium) were completed with funds given by William Alexander Julian of Cincinnati the following year and dedicated on October 23, 1926. As a whole, Woods-Penniman served as a sort of "women's union", one of the first such structures and concepts anywhere in the United States and at the same time reinforced Berea's early ·concept of equality of gender. The Assembly Hall, section C, was used by college women for chapel exercises, literary societies, glee clubs, and Young Women's Christian Association assemblies. But of course the building's principal function was as a college women's physical education building, section A. The whole was described as "a real social center". College faculty women used the two apartments on the second floor at the front of the building,section B (BTM, November 20, 1925; Berea Citizen, October 28, 1926, 1and 6). In 1942, the Assembly Hall served as a large hospital ward for women students because of a measles epidemic (Virginia Ferrill  Piland). Like architect Cellarius, Gray and Lawrence chose the colonial style because of its "qualities of spacious old Southern mansions, somewhat expanded and more simple. . . to suit the more democratic life of Berea" (Berea Citizen, October 21, 1926, 1). A veranda was added off the Assembly Hall for its wonderful view to the mountains. Furniture was made by the Wood Work Department and the building was constructed by the Berea College Building Department using student labor where possible. The building became a red brick Georgian companion to the later built President' s House (1931). Women's Physical Education classes ceased to be taught in Woods-Penn following the completion  of the Seabury Center  in  1995, and the Post Office, Crossroads Cafeteria, Collegium, Campus Security, Black Cultural and International Centers moved into the renovated  spaces. 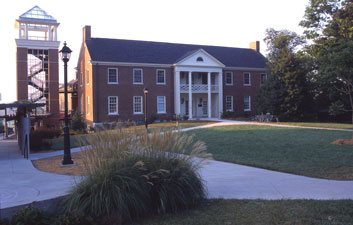 Financed in partnership with the College and City of Berea

The city issued $48 .6 million in Education Development Bonds on behalf of the College. Woods-Penniman was gutted, and both   the interior and exterior was renovated to create "Crossroads". College President Larry Shinn said: "This project is intended to reshape how we think and act as a community by integrating diverse programs and activities. The planning process for this design focused on new ways of thinking about how spaces, when flexible and shared, create new opportunities  for learning and working, and has set new renovation  standards for the College"( Berea Citizen, November 26, 1998). Woods­ Penniman Gymnasium, Fairchild Hall and the Alumni Building were  now connected  in both form and function while their external  integrity was kept in place. With its new walks, pergola, plantings and interior appointments and construction, Woods-Penn now housed the College Post Office, classrooms, restrooms and a lounge on the old gymnasium floor; the mezzanine became a lounge·, a snack bar-Crossroads Cafeteria, a classroom, restrooms and the new home for Public Safety/ College Security; the main floor which opens  out to the main campus became offices for the Black Cultural Center and International  Studies Programs, a Commons, restrooms and additional offices; and the top floor became home to the College Collegium. The original large auditorium was cut into two spaces; one a kitchen and a seminar room, the other an auditorium and stage for formal presentations.

A fountain surrounded with the inscription of the College motto, an open-air patio for the Cafeteria, and a tower  on the eastside of Woods-Penn became  "the symbolic center of the Crossroads and represents the coming together of all who study, work and live at the College."   Though it is a functional fire escape of red brick and white trim, this essentially free standing Post Modern tower with its crowning night-lit glass pyramid, would be better suited for a commercial mall. No such design equivalent, though it has Georgian design elements, is evident on the historic Berea College Campus. It seems a nineteenth century "folly" in comparison to the economical but very practical and simple construction that has been a hallmark of Berea College architecture.