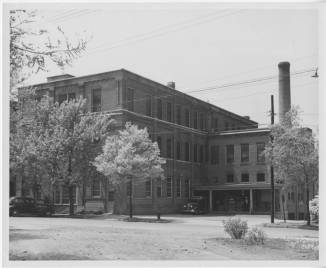 The Trades Building, originally the third or northern building in the Industrial group, was used by various industries during different College administrations. Originally the west end of the Trades Building was used for a blacksmith shop and woodworking. The upper floor housed a planing mill, a  carpentry and a cabinet  making shop; and on the east end were a printing office and a drawing room. To the north and beyond  the third building a Power House and an eighty-feet tall chimney were built (see the proposed floor plan). This Power Plant housed two eighty horsepower boilers and a sixty-five horsepower Westinghouse engine that provided electricity for the wood planers and heat for campus buildings. The woodworking machinery came from Fay, Fagan and Company ( Berea Citizen, November 27, 1902, l; and Berea Citizen, December 3, 1903, 3). The design of the Trades Building used the same common bond red brick Italianate

Lombard style as that of the Industrial building, though it was taller, wider and more simplified. The main facade opened onto Walnut Meadow Pike, but other doors gave access to the south facade. Tuscan brick pilasters are paired on the third floor and an unbroken limestone string course runs, between the third and second floors; the buildings base flares out with rounded brick silhouettes; and the whole is terminated by a flat roof.

A Bakery started as a student organization in 1925 and remained a major College Student Industry until it was phased out and dosed June 30, 1975. It was first located in buildings behind Ladies Hall/Fairchild, but with new equipment given by Mr. and Mrs. W. Gray Brown of Oak Park, IL (a large capacity oven, a high speed doug mixer and a bread molder) the Bakery expanded in 1924 and was housed in the Trades Building ( Berea Citizen, October 3, 1929, 1).

The Bakery industry was moved to an expanded and remodeled Trades Building in 1936.  Broomcraft was moved out of the second and third floors where the Candy Kitchen was re-established and the Bakery occupied the first and ground floors: New ovens, a refrigeration unit and other machinery were added at a cost of $35,000. Now one hundred sixty student workers were employed in these various industries ( Berea Citizen, July 16, 1936, 2; and February 4, 1937,  1& 3; PCM,  March 3,, 1936). The author's first student labor position was in the Bakery where he was paid fourteen cents an hour. Because of limited markets and the need for a far too costly renovation to its automation systems, the College dosed the Bakery in 1975  ( Berea Citizen, October 31, 1974).

The Candy Kitchen began in 1930 in the kitchen of Mr. and Mrs. H.-Clyde Jones. The industry moved in August, 1932, to a space above the Weaver Boys on Main Street; and again to Hanson Hall in September, 1933 ( Berea Citizen, September 7, 1933, l); and finally to the second and third floors of the Trades Building during the autumn of 1939 where an "open house" and dedication took place on November 20, 1939 ( Berea Citizen, November 23, 1939, 1).Broomcraft was moved to a new building during August 1939, and left a space for the Candy Kitchen that would be closer to the Bakery; both "kitchen industries" we.re supervised by the same man. The second floor served as storage and shipping and the third floor was the actual workspace that was divided into two parts, where candies were made and where tea sugars were. decorated. Special tables for tea sugar decoration were constructed by Woodcraft ( Berea Citizen, July 20,  1937, 7; and October  26,  1939, 4). From a suggestion by Mrs. William J. Hutchins the Jones began to make decorated tea sugars m 1931 which became a popular sales item for the Candy Kitchen and a product for which scores of women students became adept at producing. Tea sugars and fruitcakes were the Candy Kitchen's best sellers ( Berea Citizen, January 14, 1971). The Candy Kitchen remained in the Trades Building until it closed on December 31, 1970, a victim of technological change and its inability to keep pace with other national candy making mechanical and industrial operations ( Berea Citizen, January 14, 1971, 1).