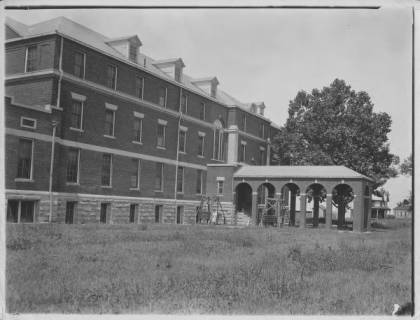 Essentially an exact copy of Kentucky Hall, though its floor plan is flipped, Talcott was built of a dark red brick and white limestone to house Foundation School girls on the Foundation / Vocational School campus. Mr. and Mrs. James Talcott of New York City, who had given funds to build Talcott Hall at Oberlin College (built in 1887), gave $10,000 for this Berea project (BTM, June 9, 1916). A hand elevator for luggage was installed and basement dining rooms were fully functional and operational by the spring of 1917. For Talcott Hall and Kentucky Annex, Cleveland Cady used a few simplified eighteenth century architectural elements for decoration on these otherwise rather plain buildings. While at the College Trustees' meeting in New York City, Mrs. Talcott urged President Frost, to include a more imposing entrance to the building. She felt the building's design was far too stark (Frost diary, November 22, 1915). As with Kentucky Hall and Kentucky Annex, Cady stipulated English) bond for the top three floors; whereas the partially submerged full basement is clad in rusticated sandstone. Limestone stringcourses separate each floor. A projecting unit of three bays housed the residence hall lounge and was enhanced by incorporating dressed limestone pilasters at the edges of the projecting two story unit. This lounge and the entrance portico were placed asymmetrically on the east facade. Rising above Talcott's entrance doors was a two story modified Palladian stairwell window. The rather unique portico extends perpendicular to the facade, incorporates a series of five Roman arches and leads to stairs that allow access to the residence hall. Entry stairs were needed because the basement Boarding Halls rose above grade. Virtually no overhang projects from the roof, but dormers decorate the attic.

Mr. Talcott died before the building's dedication that occurred during spring Commencement exercises (June, 1917), though the residence hall had opened for use during Winter Term, January 1917. Talcott provided fifty rooms for one , hundred Foundation girls. During that same year (April 6), the United States declared war on Germany, a selective conscription of American boys began and American troops saw action for the first time on the European Western Front. Influenza swept Europe and the battle fields, and a year later, during the fall of 1918, Talcott Hall served as an influenza ward for a hundred girls (Frost diary). Talcott was renovated and fire stairs were added during the summer of 1972 (PAR); the building was again  renovated in 1986.

From overwork, physical exhaustion and mourning the loss of their son Cleveland Frost, who died at the sinking of his troop ship, both President and Mrs. Frost had "nervous strokes" and were hospitalized following the construction of this building (spring 1917). President Frost had suffered from inflammatory rheumatism in 1905. But during 1917-1918, he sought specialists and visited sanitaria in Battle Creek, MI, Nashville,TN, and Orlando, FL, to battle a form of epilepsy. The Board of Trustees granted them medical leave with full salary from July, 1917, until June 1918, and until his retirement Frost suffered "nervous collapses at irregular intervals" (BTM, March 1919). Today, Frost probably would have been diagnosed with a mental breakdown.

Along with Kentucky Hall, Talcott was gutted and renovated during the academic year 2002-03. See citation and commentary concerning Kentucky Hall.